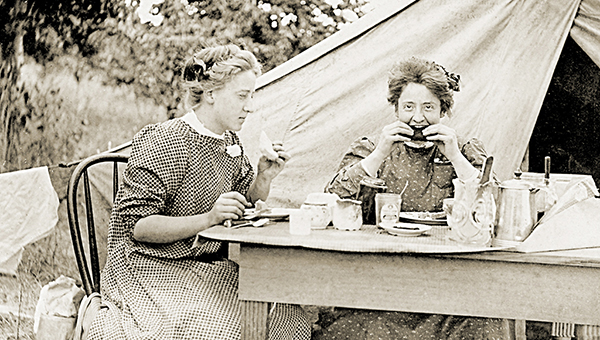 What an age we live in! It boggles the mind to imagine what our ancestors would have made of the marvelous technology we enjoy every day. Progress is a tremendous force for good. And yet, photography has changed irreversibly.

Gone are the days of hefty wooden cameras, painfully long exposures, and noxious darkroom chemicals. Now that so many people carry around devices that can take thousands of pictures and transmit them anywhere instantly, has the medium lost its significance? Was photography back then perhaps more special, or more joyful? Is humanity really better off with so much instant gratification?

Let’s consider a dozen ways in which the clunky photography of the 19th Century was better than that of the modern smartphone you used to photograph your lunch:

1. In the 19th Century, photography was a reason to dress up. These days, not so much.

2. In the 19th Century, nobody had to wonder if it was appropriate to take photos on a date. A photo was a date.

3. In the 19th Century, a photograph of a baby was a special treasure. Today, you see 15 new baby photos every time you reload Facebook.

4. Everyone in 19th Century photography — even the children! — looks tough enough to eat a paint can full of gravel for breakfast and like it. Photography back then made everyone seem like complete badasses. In comparison, we look pretty soft.

5. In the 19th Century, photographs were bold, deliberate, and purposeful. Photographers lugged heavy gear, and every frame was an investment of time and supplies. You couldn’t just breeze by a scene and timidly snap a dozen blurry pictures from the back of the crowd.

6. In the 19th Century, nobody wasted any time deciding which Instagram filter to apply.

7. In the 19th Century, nobody worried about how many Likes and Shares they were going to get.

8. In the 19th Century, people rarely, if ever, interrupted a meal to snap a photo of the food.

9. In the 19th Century, nobody had ever heard of a selfie.

10. In the 19th Century, there was virtually zero risk you’d take an embarrassing photo of yourself in your underwear while trying to be sexy.

11. In the 19th Century, people were still learning how to pose for a picture. Yet, somehow, they were still better at it than most of us.