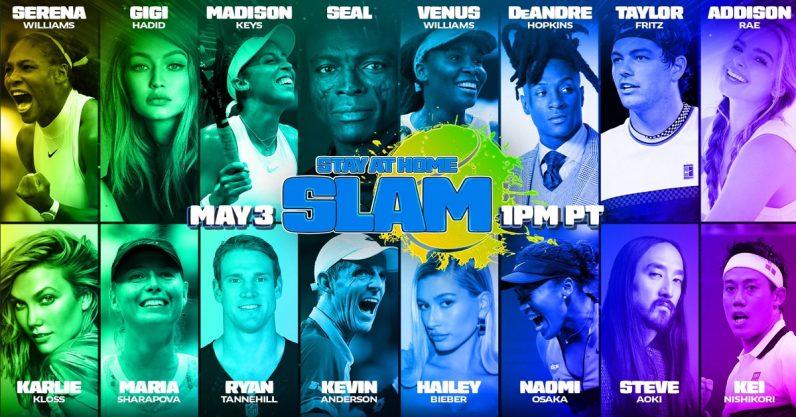 Facebook Gaming today revealed the latest event in its campaign to be a virtual tennis tournament starring various celebrities and real-life tennis stars. If you’ve ever wanted to see Maria Sharapova try her hand at Mario Tennis (yes, really), well your time has finally come.

The biggest names in tennis are grabbing their virtual rackets for the #StayAtHomeSlam, live on Facebook Gaming this Sunday (May 3), in partnership with @IMGTennis.

The tourney is called the Stay At Home Slam, and it’ll star a motley crew of tennis pros, like the aforementioned Sharapova, Venus and Serena Williams, and Naomi Osaka, alongside some non-pro familiar faces like Gigi Hadid, Steve Aoki, Seal, and Karlie Kloss. Yeah, a bit of a mixed bag, but that’s what makes it so interesting.

Considering video games have replaced many other forms of social interaction in this, the age of coronavirus, it’s probably not a surprise to see that they’ll be playing Mario Tennis Aces via Facebook Gaming’s new tournament feature. Whereas other sports pros have played at least somewhat realistic games to give a reasonable simulacrum of a real tourney — such as Premier League footballers playing FIFA 20, also for charity — Mario Tennis is a little bit more… cartoony, as you’d expect.

I’m taking bets now on what character each player is going to play as. There are 16 characters in the game (without DLC) and 16 competitors, which means someone is going to get Waluigi. Anyone want to put money on who it’ll be?

Each competitor gets $25,000 donated to the charity of their choice, with the winner getting an additional $1 million donated. John McEnroe and iJustine will be giving commentary, and wow, I can’t think of two people who have a smaller Venn diagram-style overlap in audience members who know who they are. This ought to be wild.

There’s no way in heck I’m missing this, because if Guitar Hero taught me (and my pretentious, guitar-playing peers) one thing, it’s that real life prowess at an art or skill does not necessarily translate into the gaming equivalent. I’m not going to bet against the Williamses or the other real-life tennis players because I’m sure their natural athleticism will still give them an edge. That said, I think the other celebs might have more of a chance than they would in a real-life version of this tourney.

The tournament airs May 3 at 1pm PT on Facebook Gaming.