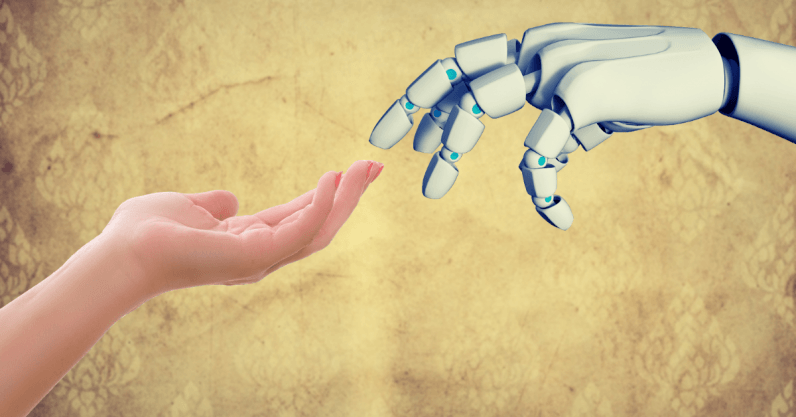 Humans look at AI in both awe and fear. When I tell folks that I work for a company that builds AI-powered virtual assistants, they frequently ask me if AI is close to becoming sentient. Is it close to becoming human? Are we fast approaching a future where Skynet from the Terminator is real? Will AI become too smart for its own good, like Ava in Ex Machina?

In short: no, at least not yet. Instead, we’re reaching an era where it’s becoming easier for machines to pass the Turing Test, a test designed to see if a machine can exhibit behavior indistinguishable from a human. What most people do not realize however, is that even the most successful AI (the type that might pass the Turing Test) actually has humans behind it. In fact, the human touch is critical. Without it, every word uttered or typed has a certain emptiness to it, seeming – for lack of a better word – robotic.

When it comes to using AI in business, it’s all the more important that it interacts with people in a way that’s authentic. And the only way to infuse this human element into AI, and in the process make AI more conversational, is – you guessed it – with humans! If we say goodbye to the human touch entirely, the technology won’t result in the sought-after outcomes that businesses are looking for, like enhanced customer experiences, efficiency and real ROI. In some sense, it’s no different than when a human takes on a task – it learns from experience and gets better at executing over time. So, in the same way humans learn from experience and other humans, so does AI.

Though people have been talking and speculating about AI for years, in reality it’s still in its infancy. AI is being used today in ways that show tremendous promise, but like talented new employees, AI needs people to learn from. You wouldn’t expect someone new to fend for themselves to figure out how to get a job done right, and AI is no different.

Machine learning is the backbone of AI — the technique that gives AI the ability to learn from experience and the data that experience generates. AI needs a constant feedback loop that allows it to learn. It is this continuous learning throughout the life cycle of processes that provides the ever-increasing benefits that businesses expect.

Think of it this way: people go to school throughout their childhood, and in many cases college, as a foundation for success. While this education gives them the foundation, it is practical work experience and the guidance and training from others that ultimately helps people to develop specific skills and expertise. AI is the same, it needs human understanding and experience to complement its effectiveness at the same time it trains the AI applications to be more self-sufficient.

Humans, by nature, are complex and unpredictable, and it often takes another human to understand the nuances of conversation. For example, when a human takes a dinner reservation and asks the patron how many people will be in the party, a human knows, “My wife and me” means two, but an AI algorithm may not know that.

Too often in the customer service realm, callers are greeted by a virtual assistant programmed to only understand a limited set of questions, options, and commands. In this all-too-common scenario, the person’s questions often fall outside of this narrow scope of options and lead to a poor customer experience, leaving people frustrated and unhappy.

Issues like this can have some serious consequences. While Statista reports the global chatbot market is expected to reach $1.25 billion by 2025, a recent Gartner study found that 40 percent of bot/virtual assistant applications launched in 2018 will have been abandoned.

This is, in part, because these systems require mountains of relevant data in order to truly understand complex human dialogue and a highly sophisticated AI engine in order to extract contextual meaning from data. Today’s chatbots are essentially digital IVRs, limited in scope to a specific set of tasks with no real time human interaction to make them better over time. As a result, chatbots simply can’t deal with the complexity of human dialogue.

With humans supporting AI, the number of questions an AI system can answer skyrockets to near human levels of understanding. The difference: humans are able to discern messages that are impossible to translate with existing natural language processing (NLP) and speech recognition techniques, like sarcasm, slang, colloquial expressions or thick accents. Additionally, human brains are able to listen and understand through background noise — AI technology isn’t so savvy, at least not yet.

Two brains are better than one

If you take a look at some of the most exciting applications of AI, it’s evident that when AI and humans work together, its impact is unmatched. In healthcare, AI can uncover diagnoses that doctors may have overlooked, but it’s the doctors themselves that make the final decisions. This process, in turn, trains the AI to become even stronger and more accurate the next time around.

In finance, AI can offer people advice on where to invest their money, but humans need to train these systems to consider factors like age and changing life conditions like marital status. In customer care, AI can sort through thousands of social posts to identify those worth a human’s attention and suggest responses, but then have to hand it off to a human to make adjustments and personalize based on the situation at hand.

It’s true: AI will get smarter over time, but people aren’t going anywhere. In fact, humans will dictate whether AI is successful. As our needs change, jobs evolve and language gets muddled with slang, AI will need an inside source to stay up to speed. With humanity as AI’s counterpart, our awe over it’s power will outpace our fear.

Read next: Learn how to make your own games for a price you pick