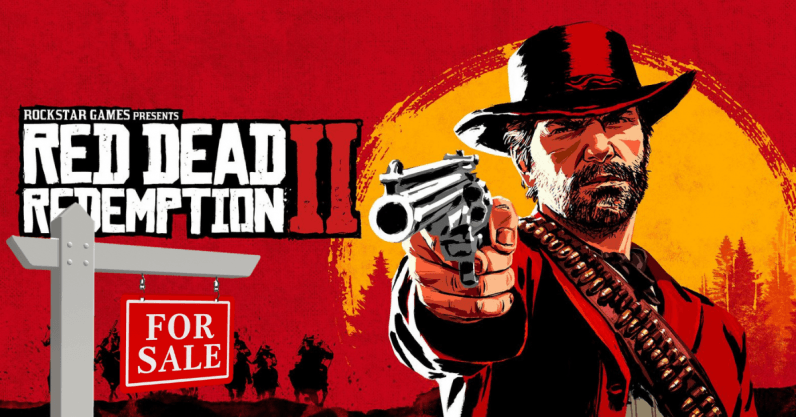 The last weeks have been abuzz with players trying out Red Dead Redemption 2, a long-awaited title by Rockstar games, offered at around $60. Despite its popularity, it’s already entered the secondary market, available for around $50.

However, only people who buy physical discs could benefit from this price drop, as a secondary market for digital game copies simply doesn’t exist.

But what if we did have a secondary market for digital copies of video games? How would it work, what would it look like, and who would benefit from it the most?

This month, my family bought a vinyl record player and we had the privilege to visit a local vinyl market with my wife in Vilnius, Lithuania. We bought some initial additions to our small collection: a few ‘the best of’ records for a few euros, and also some more expensive and well maintained original releases from Queen and The Rolling Stones.

The former record was a few euros more expensive than the Rolling Stones — probably due to the recent Bohemian Rhapsody movie.

Nevertheless, it was an amusing and perplexing experience: a remarkable realization how some 30-40 years old items store some, if not most of their value in the [niche] secondary market.

This reminded me of an industry I’m currently involved in: the gaming ecosystem. It also has the value storage and price fluctuation factors, yet only for the smaller part of the ecosystem: the physical discs.

How do prices behave

For many titles, it can take just a few weeks after the launch to see a price drop in the primary and secondary markets. For others though, a price drop can take years: Rockstar Games offered its GTA V at $30 only in mid-2018, after more than four years of selling it for $50-60.

Witcher 3: Wild Hunt, a massive award-winning single-player blockbuster, was launched in May 2015 at $50, but its ‘standard’ game price has dropped to $40 and the used version price fell to $30 in four months after the launch.

Witcher’s price dropped to $25 (50 percent off the release price) around nearly two years after the release. At that time, the used copies were circulating for around $17.50.

What about a multiplayer title then? Overwatch, a universally acclaimed first-person multiplayer shooter from Blizzard, was priced at $40 for PCs and at $60 for consoles during its launch in May 2016.

Clearly, all games get cheaper over time, but the pre-owned copies always follow the prices of the ‘unused’ versions: the resold copies might be 5-10 percent cheaper at first, then dropping their prices to 10-25 percent in comparison.

Historically, many manufacturers, including game development companies, have feared the second-hand market as it can cannibalize their primary market sales – especially if the used goods are ‘perfect substitutes’ for their newer versions.

However, it all comes down to two major factors: where the original owner of the game (or any other product) uses the money that is gained from reselling the game, and if there’s an ecosystem that benefits the producer.

The car industry would be a great example of a stable and thriving ecosystem for the new and the pre-owned goods. It’s safe to assert that once the initial buyer of a car sells his or her vehicle, the revenue often goes on to purchase another new car, while the buyer of the pre-owned car still uses the parts and maintenance services from the car manufacturer.

For the past decade, the game development business model has transitioned from direct sales to the free-to-play model to sales of in-game items. Though both business models are still on the table, blockbusters such as Fortnite are entirely driven by purchases of cosmetic in-game goods.

From the developers’ perspective, the pricing of the games has become less important, and so if one’s business model is at least partially based on the in-game economies — there’s little reason to block the growth of the number of users who just want to save a dozen of bucks on the game copy itself.

The direct financial impact is a trickier subject. The majority of gamers spend most, if not all of the money for sold discs to buy new titles, both new and used ones. Gamestop, a major game retailer, once said that 70 percent of the money that gamers receive from selling used games are spent on new releases.

Though this is difficult to audit, I am certain that enabling the second-hand market for digital game copies would not jeopardize game developers.

On the contrary, it would broaden the gamer pool and trigger the transactions for billions of dollars which are currently stored in gamers’ libraries. There are also vast opportunities to reach out to gamers who cannot afford new releases, giving them the chance to legitimately own digital copies and avoid turning to piracy.

In addition to the benefit side, the second-hand market for digital copies would decrease the buyers’ risk: I’m fairly certain that other gamers would, like I, be more willing to try out something new if they knew that the game could be easily resold.

What’s more, the physical copies of the game are only 5-20 percent cheaper in the second-hand market over the course of their life-cycles, yet the game developers haven’t received any commission from it – their only benefit is the ‘ecosystem’.

I believe that the technology opening doors to digital game resales is already on the horizon. Of course, there are plenty of business opportunities and questions to be tested against market forces, but I can’t wait for the launch of a product that enables the secondary market just to see how it works and how it impacts the industry.

Read next: How blockchain is bringing staffing innovation