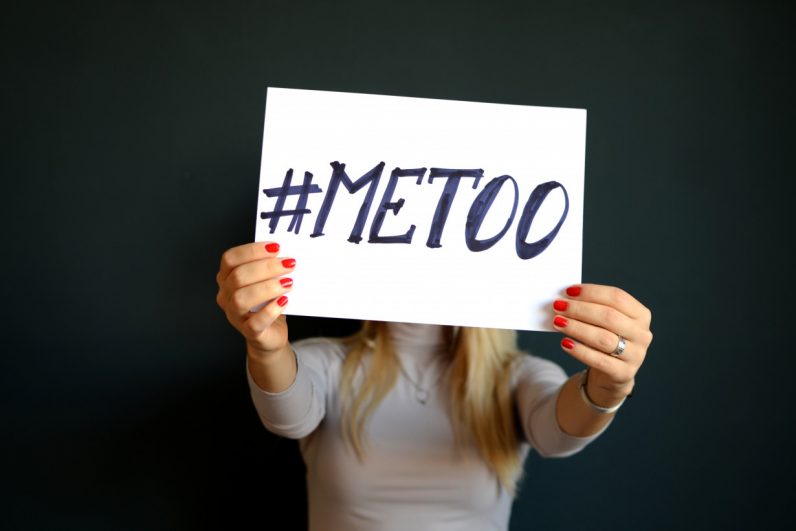 When the #metoo movement began, I wrote an article, yelled on social media, and attended my local Women’s March. Satisfied with my contribution, I placed my attention elsewhere. And then our elected representatives confirmed a man for the US Supreme Court who, without even taking into account his guilt or innocence, has no place seated on that tribunal. What’s worse, our President openly mocked Christine Blasey Ford, a brave woman who was willing to share her horrid experience on the national stage for the good of us all.

We may not be able to prevent some grandiose occurrence like another supreme court justice accused of sexual assault being appointed, but over time our decisions to unify simply to protect the vulnerable can have an impact on those larger spheres. While most of the advice shared here is meant for employees with no real or perceived power at their company, it is certainly meant to resonate with managers and leadership as well.

So I thought I’d begin by sharing a personal story about my #metoo moment.

Several years ago, while I was working for a very different tech company than the safe and supportive one I work at today, one of my female co-workers disclosed to me that an executive had been making romantic advances toward her. He was coming on strong (without any physical touch or verbal sexual references) and she was feeling uncomfortable. I offered emotional support and encouraged her to speak to HR about it.

Then one night after work, several of us went out and had a few drinks together. The group whittled down to me, my coworker, and the executive. At the end of the night I escorted her back to her car, and as we sat there talking for a bit, we saw the exec walk over. Instead of staying with her to be a buffer for his advances, I bid a hasty retreat. The last word I heard her say was, “Really?”

Luckily, he never became physical or sexual. But she should never have had to endure behavior like that in the workplace, behavior that as a man I’ll probably never experience.

Why did I do nothing? I was still caught in the paradigm where I identified more with him than with her simply because of gender. I liked being a bro to this older, more successful, cool guy. I knew his behavior was inappropriate, and I was too afraid to stand up to him. I was willing to be an ally to her, but not an advocate.

In August 2018, the podcast, Battle Tactics for your Sexist Workplace aired an episode entitled “Men: You have more power than you realize. Here’s How To Use It”. The hosts, Eula Scott Bynoe and Jeannie Yandel, interview Ruchika Tulshyan, an award winning inclusion strategist, author, and speaker. Ruchika shares how allyship differs from advocacy. In my words, an ally will offer verbal support up until the point that they are putting themselves at risk. Advocates take action in the face of risk.

I was also guilty of preference falsification, the social danger of defending the wrong people. It’s the principle behind all of the silence regarding Harvey Weinstein’s sexual assault for so many years. Men and women alike were afraid that their careers would be destroyed if they spoke up, so instead they did nothing.

I am grateful that the #metoo movement has become so powerful and that sexual misconduct complaints are now being addressed. This is an opportunity to change the greater culture, one in which it is still acceptable to treat women as sex objects. One major missed step for many companies to protect their employees is to create bystander intervention trainings. This empowers everyone to be an advocate for their colleagues, and creates safer workplaces. It may even ultimately re-educate men about how to treat women as equals instead of sex objects or worse.

What I should have done differently all those years ago is the crux of a training that every company should provide, because there truly is safety in numbers. According to Claire Cain Miller in her New York Times piece, The #MeToo Moment: How to Be a (Good) Bystander, “Preventing harassment requires companies to take responsibility—and it’s pretty obvious that most corporate sexual harassment trainings don’t work.”

Miller sought to find the most effective corporate sexual harassment training program, but could not find even one. She had to turn to research conducted on college campuses and in the military (see the Air Force’s Green Dot program). According to research that Claire uncovered, the most effective tool against sexual harassment is bystander intervention. She also cites research from XpertHR, who polled more than 500 HR professionals. They found that less than a fifth of companies plan to offer bystander training in 2018, training in which people are taught how to respond if they suspect another person at work is being harassed.

Miller offers the advice of experts not to confront the harasser in the moment (I assume she means in circumstances where the victim is not in peril), and instead suggests a variety of tactics:

The problem is that in many situations confronting the harasser could mean retaliation and, with certain authoritative personalities, bystanders feel as much at risk as the victims when addressing the incident.

According to the hosts of Battle Tactics, this is also where advocacy can make an impact. Men have a lot of power to sway other men when they hear something dehumanizing about women. Men make sexist comments about female coworkers to their male colleagues because they feel comfortable around them. Advocates can use that comfort level to speak up and stop things in the moment.

“The small stuff is actually big stuff.” That’s according to men’s accountability expert, Peter Qualliotine, who was interviewed in the Battle Tactics podcast. He continues that you can disrupt and reprogram oppressive behaviors by engaging someone else in the workplace about a small yet offensive look, gesture, or comment. So just say something. There are no magic words and it’s going to be awkward and people will get defensive. Just say one word to interrupt like, “Ouch.” This bookmarks the conversation for later. “Remember when I said, ‘ouch’…”

Leadership must get involved

Bystanders have the ability to slowly affect change, but leaders — the people we look up to and who hold the keys to our status and financial reality — have the ability to create change much faster. Instead of talking in the background, how do you (a person of power and privilege) advocate for change?

Here are some more battle tactics from the podcast:

I’ll also add this one. Let’s face it, HR exists to protect the company against risk and not necessarily to provide safety to employees. So hire an ombudsman, a neutral party who will listen to employee complaints and act as an advocate on their behalf.

What can men do?

It’s been years since my #metoo moment. In that time, I have had many of these difficult conversations with other men but never at work. One young man at a festival initiated a conversation by describing his latest sexual conquest. I shared that I have a “very different relationship to the feminine”, and by the end of our conversation he admitted that he was just trying to curry favor with me.

And just this week I received an email response to a Craigslist post that I posted to sell my vehicle. Among the photos was one with several women sitting inside.

The email said, “Does it come wit the bitches?”

To which, I responded:

“I grew up in a traditional, patriarchal, macho environment where I was taught that women were objects. Although I was naturally very sensitive and good-natured, I adopted this philosophy because it’s how I got my love from the men in my family. The perception was that to be accepted I had to ‘act like a man’. One of the ways to do that was to prove my sexual prowess by referring to women as bitches or sluts.

You don’t have to behave this way my friend. I give you full permission to treat women well, to honor the highest version of yourself which includes avoiding sending sexist jokes to someone you don’t even know.

May this advice serve you well.”

“Thank you for giving me pause and perspective. Sometimes clarity comes when you least expect it.”

I would like to believe that if a similar circumstance repeated itself in the workplace, that I would do the right thing. I would stay present to ensure that she was not left alone with him. I would say something. The way things are headed with this powerful movement, my hope is that I will never have the opportunity to find out.

Read next: How to use Windows 10's awesome 3D sound for headphones