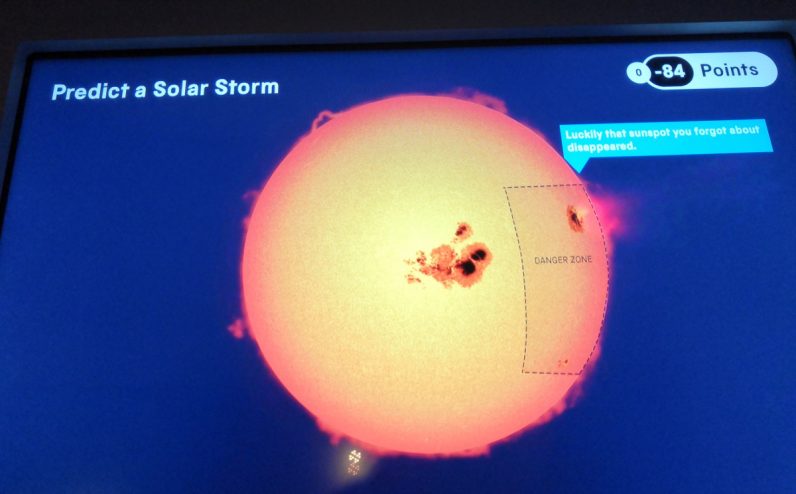 This week I went to get a sneak preview of the new exhibition which opens today at the Science Museum in London. The Sun: Living with our Star explores our love (and fear) relationship with this enormously powerful force that sustains all life on Earth, but could also destroy us all.

As a tech person, however, what really grabbed be here was the idea of something in between. Not the total annihilation that must eventually come as our star – like all others eventually dies – but the havoc that a solar storm would cause to a human race that’s become entirely dependent on electricity.

One of the displays at the exhibition showcased some humble-looking drawings by amateur Astronomer Richard Carrington. They record his observation of solar spots, which indicate the occurrence of explosions on the surface of the sun called Coronal Mass Ejections (CMEs) and the one he happened to observe is the largest on record to this day.

When the 1859 solar storm hit earth, people all over the world, from the U.S. and England to Australia and Chile saw spectacular Aurora displays, ranging from beautiful violets and greens to blood-red. The sky was so lit up that people could read newspapers in the middle of the night, and miners in America started making their breakfast believing it was morning.

The other consequence of the solar storm was that the telegraph system collapsed. The electricity in the air was so strong as to cause fires in some stations, and in others, operators were bemused by the fact that sometimes they could work the telegraph, but only if the power was turned off.

As disruptive as losing telegraph communication was, however, this all happened in a time where reliance on electricity wasn’t really the norm. If the same thing happened today – which scientists say is just a matter of time – power grids all over the world would almost certainly go down on a spectacular scale, depending on the severity of the storm. 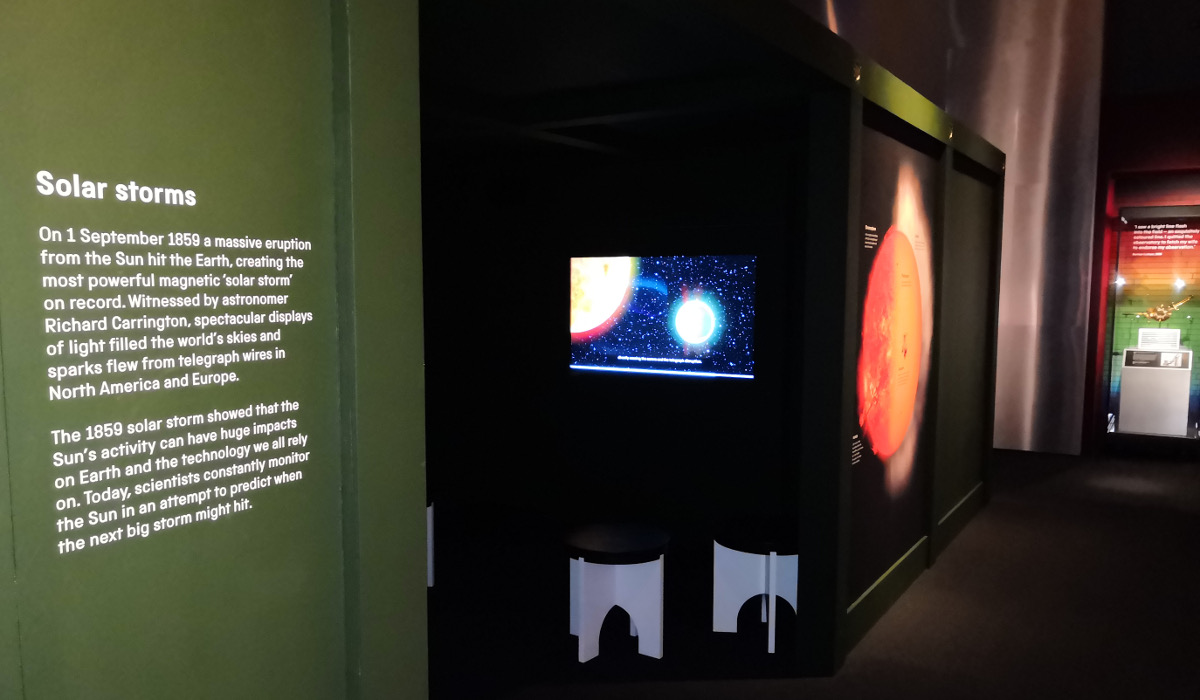 I spoke to one of the curators of the exhibition, Dr Oliver Carpenter, about what that would actually look like, and what struck me the most was how incredibly dependent we’ve become on technology for our basic needs.

Nevermind convenience – the fact that we’d not be able to use our gadgets, smartphones and apps for the million things we do each day – or how card payments wouldn’t work (how many of us have almost stopped carrying cash altogether?) but we’re talking fundamental survival needs here.

Take water, for example. Most of it is pumped into our houses using electricity, so we’d find ourselves relying on bottled water for drinking, and unable to so much as flush a toilet. Food? Good luck running current distribution systems without electricity, and you’d be lucky if your local supermarket could even sell you what they had on the shelves. From tills to fridges, things would just stop working.

And as the old truism goes, humanity is forever just a few square meals away from anarchy. If the situation went on for weeks, or even months, we’d be in a whole lot of trouble, to put it mildly.

I asked Dr Carpenter if there was much we could do about that, given the fact that such eruptions happen frequently and it’s only a matter of time before our luck runs out and a CME occurs at the wrong sort of time to hit the Earth.

As it turns out, we’re getting a lot better at monitoring and predicting such events, so chances are that the good folks at NASA would be able to give us a few days’ warning before the proverbial rays hit the fan.

However, as much as I’d like to be a glass-half-full sort of person, I can’t help but wonder how much good that would do. Looking around at the chaotic way that governments operate all over the world, do we trust them to have robust contingencies in place for such scenarios?

Take Britain, for example. We had two years’ warning about the disruption that Brexit will cause, yet the government still doesn’t seem to have a plan, much less started to take action to mitigate that. And as bad as that will be, it’s nothing compared to the total blackout scenario we could potentially be facing if a bad enough storm hits.

So even though the curators at the museum stressed that the “survival kit” display next to the Carrington sketches was a tongue-in-cheek, humorous take on this apocalyptic worst-case scenario, I’m actually not so sure. 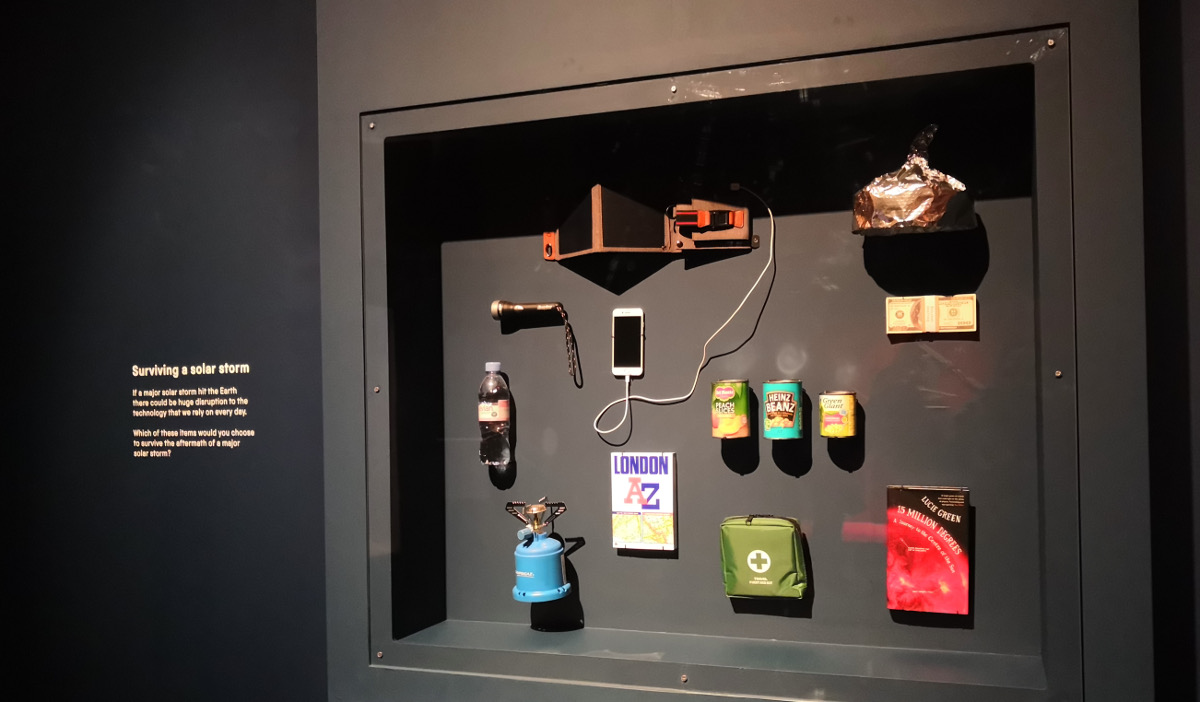 After all, there is serious talk about the need for the U.K. to start stockpiling food and medicine for Brexit, so there can be no harm in getting a few extra cans in the pantry. Just in case.

I find it oddly comforting to be reminded that there is a universe out there that’s larger than the current political madness that seems to plague us on both sides of the Atlantic. If Armageddon must come, I’d much rather it was caused by a cosmic storm than some fool with too much power randomly pressing the big red button, or self-serving politicians calling stupid referendums . The silver lining in this whole tech blackout scenario is that Twitter would stop working too, and right now that’s looking like a price that might be worth paying.

Read next: My colleague Googled my dad and it got weird