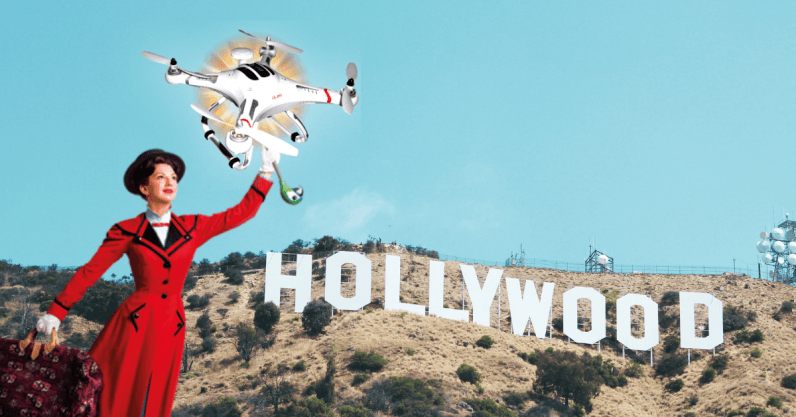 Astrology, tea leaf-reading, crystal balls, and the movies. Quick quiz: Which of these four would be prognosticators has accurately predicted our tech future?

If you answered “movies,” consider yourself worthy of an Oscar.

When it comes to predicting the future, Hollywood has turned out to be a far more accurate seer than your local crystal ball-gazing psychic. Robots, artificial intelligence, space travel, genetic engineering – even smartwatches. They’re all there in the movies and TV shows – some of them decades old – that baby boomers and Gen X’ers grew up with.

Among the future inventions that have loomed large in Hollywood history are unmanned aerial vehicles, aka drones. As it turns out, there are dozens of examples of drones being used in movies and TV shows – with many of them portraying the use of drones as they are actually deployed today, whether to carry weapons, provide air surveillance or protection, or even as toys.

The first Hollywood references to drones as we know them today – UAVs that can operate autonomously, or at least by remote control – date back to the 1970s, in the earliest Star Wars movies.

To learn how to use a lightsaber, Luke Skywalker practiced with a lightsaber training orb – properly known as a Marksman-H combat remote – which served as a “sparring partner” for him as he learned to control his weapon, under the tutelage of Obi Wan Kenobe. Star Wars got the military use of drones right, too – with the Imperial Probe Droid used by the Empire to fight its enemies.

The drones of 2018, of course, evolved from previous technologies, utilizing aerial and radio technology to fly unmanned vehicles in experimental settings, going back to the post-World War II years. The genius of Hollywood was to imagine what these unmanned aerial vehicles could be – what they could do, how they could be used, for better or worse.

If Star Wars showed the military aspect of future drone use, Back to the Future II – almost as much a cult classic as the Star Wars series – showed the commercial use of drones, when a USA Today-branded drone surveilled the crowd emerging from a courtroom as Marty and Doc look on in (the then 40 years in the future) year of 2015.

A drone that autonomously knows where to go and when to start taking video or snapping photos must have, by definition, a certain level of artificial intelligence – and while USA Today doesn’t have “reporter” drones yet (as far as we know), autonomous drones to patrol perimeters or critical infrastructure (like power plants, reservoirs etc.) for security purposes, or to take video of accident scenes for use in determining insurance claims, are becoming more and more common all the time.

Not surprisingly, the Star Trek franchise – starting from its earliest iterations – were chock full of drones. Most sci-fi experts agree that the first bona fide drone in a Star Trek episode was in a 1988 episode of Star Trek: The Next Generation, when drones attack the Enterprise and its crew. But the concept of unmanned or autonomous craft goes even further back, to the original Star Trek series that ran in the late 60s.

In one 1968 episode, for example, Captain Kirk discovers a spacecraft dressed up as an asteroid that is flying autonomously – with a population inside the craft/asteroid that has no idea they are in a spaceship – that is on a collision course with a populated planet, after said asteroid was knocked off course for its original destination (the crew, of course, gets the ship back on course, and avoids violating the Prime Directive).

While not strictly a drone (it’s too big for that moniker) and not strictly unmanned (there was a primitive culture aboard, after all), the asteroid in the episode anticipated the essentials of drone tech – a vehicle flying a pre-programmed route, operating autonomously, and navigating the galaxy in search of a new world for its refugee inhabitants.

We’ve just scratched the surface here; I could go on and on citing examples, from movies like 1992’s Toys, 1991’s Terminator 2, 2003’s Terminator 3, an episode of Fox’s Dark Angel from 2000, the Diagnostic Repair Drones on Farscape (also Fox) – and many more.

There’s even a movie filmed using drones, without help from land-based cameras; and decades from now, that film could be hailed as having predicted how drones will be used in our own future. If drones are already at the point where they can film a movie autonomously, who knows where they’ll be thirty years from now?

There’s one way to find out; keep checking out drone tech in movies and TV. Hollywood apparently knows its stuff; so far, the Silver Screen has come up with some golden predictions about our drone future.