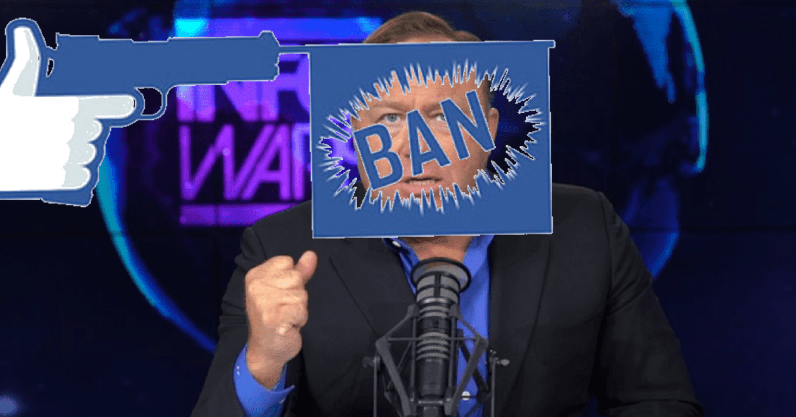 The swirling maelstrom of fake news and absurd conspiracy theories that’s surrounded the ongoing Infowars mess has perplexed today’s leading social media platforms like no other, and major companies like Twitter are still struggling to formulate a game plan for handling these situations in the future.

Despite their best efforts at salvaging the reputation of their platforms, I’ve only seen Twitter’s Jack and Facebook’s Zuckerberg consistently let the public down when it comes to handling conspiracy theorist like Alex Jones and his hivemind of Infowars followers.

Why is it so hard for social media companies to fix the Infowars mess? My experience with the world of disinformation campaigns leads me to believe that the very nature of these platforms enables and excites conspiracy theorists like Jones. As much as I wish it were otherwise, our Infowars mess isn’t going anywhere anytime soon.

Since their inception, social media platforms have been hijacked by Jones-like conspiracy theorists to amplify their message to the public and to selectively target vulnerable and ignorant groups of people who are particularly receptive to their messages.

It’s worth reviewing your own social media experience to truly understand this concept; I can’t tell you how many times my own social media feeds have been clogged by the opinions of like-minded friends I follow, leaving little to no space at all for dissenting opinions.

The algorithms that power sites like Facebook and Twitter are literally purpose-built to isolate us into groups of compatible users who will intensely feed off of one another’s activity, prolifically sharing posts. What’s worse, these algorithms are necessarily biased, as they contain the prejudices of those who programmed them in the first place.

This is bad news for society in many ways, mostly because men like Alex Jones can spread their views across disparate social media channels at a more effective rate than ever before.

In the past, the village drunkard spewing off vain conspiracy theories about how the government is turning frogs into homosexuals – actual nonsense peddled by Jones – was largely shunned by the public.

More importantly, he couldn’t reach the other crazies who were evenly spread out around other villages. In the era of social media, however, all these ranting fools can congregate online, share their venomous stories, and elaborate on how to better spin their fictitious yarns, all for more clicks, likes and shares.

The most far-out stories being spawned or amplified by Jones have quickly evolved from the relatively-humorous-but-clearly-absurd to the fundamentally dangerous.

Jones and his band of online followers, who cling to his every word like the gamblers reading online casino news, have targeted the parents of children who were slain in the Sandy Hook massacre, for instance, claiming the event was a hoax designed so that the government might confiscate the guns of Americans. Even though this has been happening for years, only recently have social media platforms decided to act.

I was glad to see that things have finally progressed to the point that Twitter finally got on the bandwagon and decided to hit Jones with a seven-day ban after he violated their rules.

The fact that Twitter hasn’t joined other major social media platforms in totally banning and shunning Jones illustrates that it has a unique problem when it comes to confronting conspiracy theorists. Seven-day bans are virtually worthless in this situation – indeed, they’ll likely only add fuel to the fire currently being flamed by Jones, who claims that the mainstream media and world governments are co-orchestrating a ban campaign to silence his “truth-telling.”

If these companies don’t embrace more transparent cultures that see rules clearly enumerated for the community and powerful users with large followings held accountable for their insane rantings, then we’ll never get out of our Infowars mess.

Every day, I scream in vain as I see Facebook and Twitter’s executives shun transparency thanks to the potential scandals that could come with it; more and more, we need to demand that these companies come clean about how they handle conspiracy theorists like Jones.

When it comes to banning crazies from social media channels, there’s one simple rule I’ve learned it’s imperative to follow; it’s all, or nothing at all. If certain social media channels justifiably ban Alex Jones on the basis that he’s targeted certain people for harassment, spreading hurtful and demonstrably false misinformation, and generally contributing to a toxic atmosphere on their platforms, then all other major social media platforms need to consider investigating him and taking action themselves.

And don’t even get me started on Jones’ absurd first amendment claims; private companies are under no obligation to permit you to use their platforms for the purpose of political speech, especially when it’s so toxic to their own users.

It won’t be getting better

Because the only way that things will be getting better is if tech executives come together and usher in a new era of transparency, we shouldn’t expect things to get better.

That’s because these platforms often thrive off the negativity generated by their users. My own personal experience teaches me that negative emotions and chaos necessarily lead to higher rates of engagement, which is good for the brand.

If these companies were serious about combating the likes of Alex Jones, they would issue public declarations when users are banned from their platforms and explain in detail which rules were violated by the banned-user in question.

This would help pre-empt many criticisms from Jones and his ilk, too; after all, if we make it clear that conspiracy theorists and harassers were banned and stripped from platforms precisely thanks to the fact that they were actively breaking rules and spreading hate, no one will pay their nonsensical claims of censorship any heed.

I want more humans added to the review process for bans, too, as algorithms simply can’t be held accountable when things go wrong in the way that people can.

These kinds of solutions will take huge investments on behalf of leading social media companies, however, and will necessitate changes to how they collect and publicize data on their users.

Thus, we should expect little meaningful pushback from tech execs in the fight against conspiracy theorists; while big names like Jones will inevitably go down thanks to the scandal surrounding their continued existence on any popular platform, conspiracies will continue to proliferate because social media channels were virtually designed to spread them around.

Here’s the crux of the issue; if you take virtually any problem confronting today’s social media platforms, be it Alex Jones or anything else, these issues stem not from the platforms themselves but from human nature applied onto said platforms.

Some people are venomous, cruel, and virtually live to harass others and spread misinformation. Couple these kinds of beings with the power of social media platforms, and you’ve unleashed a monster reminiscent of that Alexander Hamilton warned us about hundreds of years ago.

Hamilton, one of the great sources of moral clarity in politics, famously noted that men who are unprincipled in their private lives who take every opportunity to “flatter the zealots of the day” have one object; “to throw things into confusion that [they] may ride the storm and direct the whirlwind.”

Alex Jones wants a fight with today’s biggest platforms and the mainstream media – such a fight bolsters his standing with his die-hard supporters and gives the appearance that he’s “under siege” for speaking truths that no one else dares utter. We should recognize that.

Believe me when I say that in the world of Alex Jones, nonsensical and unequally applied rules are just fine by him – they make it all the easier for him to target his audience and harass his enemies, fueled by the chaos of our modern media ecosystem.

This is why it’s so hard for social media companies to fix the Infowars mess – Twitter, Facebook, YouTube, and other platforms will all apply their rules unequally over and over again, fueling the kind of hypocrisy and information-chaos that conspiracy theorist like Alex Jones thrive on.

Read next: Marketing to developers is hard, here's what I learned