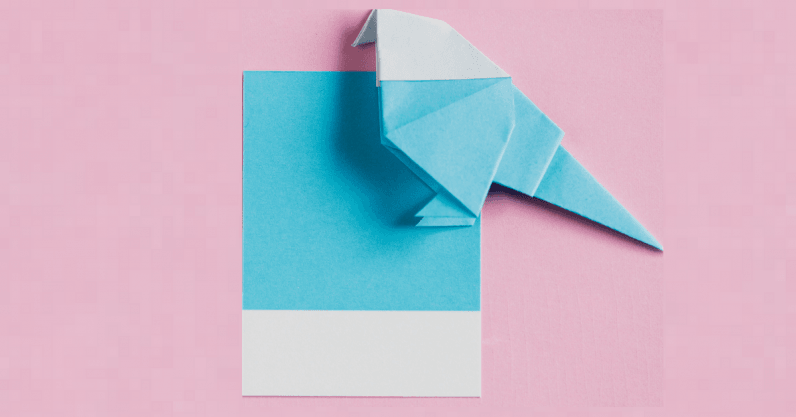 Origami is the art of using precise folding patterns and sequences to create something beautiful out of almost nothing—a piece of paper.

UI design is also the outcome of many small, meticulously assembled elements coming together. So in many ways, building a perfect user interface (UI) is like folding together a perfect paper swan.

But have you ever interacted with a product that just doesn’t feel right?

That’s because like origami, minuscule design imperfections quickly add up. The difference between a beautiful swan and an ugly duckling could be one or two tiny flaws in the early process of the design.

And the same logic applies to scaling design. Here’s a few things design-focused entrepreneurs can learn from origami.

Aim for perfection from the very first fold

I met my cofounder on a job for the Spanish toilet company, Roca. Building a humble lead-gen form so Roca could sell more toilets ultimately sparked the idea that got us to where we are today.

And for the first two years or so, it was just us two. We constructed all the design elements first-hand that would come together to make our new product. We didn’t know it then, but we were on our way to creating something huge.

Throughout this process, we continuously thought of origami. We kept in mind that even though you can’t see every fold inside a finished piece of origami, small mistakes can make a tangible difference in the result.

Because perfect design needs balance, rhythm, and consistency—not just aesthetic. It’s about the way it feels.

Steve Jobs was famously obsessed with making sure Apple’s products were beautiful both inside and out, even though people don’t experience the inside. For him, a good designer is someone who “cares about the look of the parts you don’t see.”

He realized that just like origami, if you know your design is ugly on the inside, you’ll never truly see it as beautiful on the outside.

Stay true to your roots

The “grandmaster of origami” was Akira Yoshizawa. He’s known to have created over 50,000 different origami figures in his lifetime.

After living in poverty all his life and working a factory job, Akira Yoshizawa decided to focus on origami full time in his mid-twenties. Even though he was even poorer for many years, he put being a designer before earning a decent wage.

He believed that if he perfected his art, its quality would be recognized one day. And turns out, he was right.

I didn’t have much business sense at all when I started my company — I  was a designer through and through. Being a designer should always come first for designer-entrepreneurs, too.

But it’s vital to get the product right first, and figure out the business later. Many business-minded entrepreneurs can’t conceptualize a product creatively, so right there you’re already at an advantage.

At the end of the day, people don’t buy products because of the people in the office — they buy products when they feel connected to them. So like Mr. Yoshizawa, stay true to your passion, and the success will come.

Keep your fingers on the folds

As a designer, you’ll always feel close to the product. Even when your company grows, be sure to stay involved in the design elements that make your product unique. Every iteration and every detail counts, so make time to be actively involved with your product.

Inevitably, you’ll need to hire more designers as your company scales. Your company’s success will depend on your team reaching the high bar you set for design quality — so hire carefully.

Just as the first few folds are crucial to the end result of beautiful origami, the first people you hire will have a massive influence on the quality and direction of the product. So stack your team with people who are as obsessive about the details as you are.

Learn from your limitations

If you don’t have a managerial background, there will be a learning curve as you get used to your new leadership role. And you’ll be expected to make some hard decisions.

Being a leader is not something that comes naturally to many designers, and along the way you’re going to make mistakes.

Akira Yoshizawa realized that he was not a natural manager himself. Luckily, his wife had management skills, so she helped steer his career toward prosperity and international acclaim. But their business’ success was ultimately driven by the brilliance of his origami designs.

As a designer, your company’s growth should be driven by the strength of your product. If you make mistakes on the business side, hire people with more experience in leadership to help you learn from them.

Life, as we know, imitates art. And in this case so does design. So if you’re embarking on your own entrepreneurial journey, pay close attention to every fold along the way — both in your product, and your business.

Read next: Learn a second language during your morning commute with this $30 interactive app