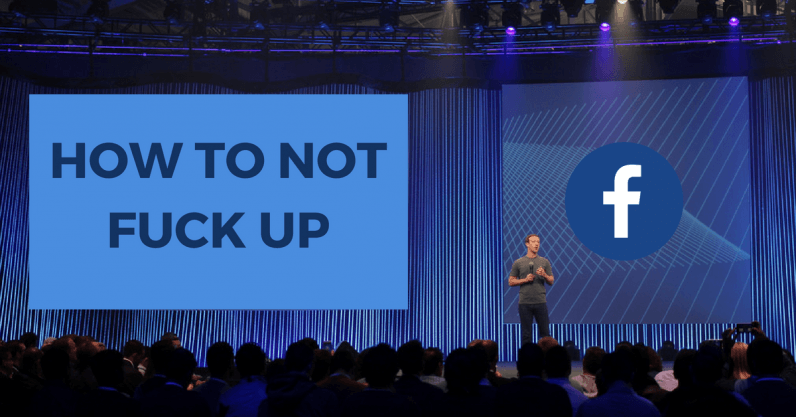 When Mark Zuckerberg’s annual challenge was learning Mandarin, it was still fun and games. Now that his 2018 goal is simply “fixing Facebook,” not so much.

It’s fair to say 2018 has been a horrible year for the social network. With its infiltration by Russian operatives, the Cambridge Analytica scandal, concerns about users’ psychological wellbeing, in addition to what could be the biggest one-day drop of all time with Facebook losing $123 billion in value just  last week, it’s no wonder the CEO has been nicknamed “Suckerberg” on international TV.

As good ol’ Suckerberg visits governments and newsrooms around the world on his ongoing apology tour, it’s clear: a company that’s been aiming to help users overcome their perception problems is, itself, in the middle of a brand crisis of its own.

But let’s park the schadenfreude for a moment. While Facebook weathers their PR storm, these troubles could engulf any business – maybe even yours.

When you are busy growing and being innovative, it’s easy to quickly lose that crucial connection with your customers. So what can be done to avoid getting caught up in something similar?

Crisis happens when your organization’s internal perception of itself does not match up with how outsiders view you.

After setting up and gaining traction in your company, if your day-to-day involves fire-fighting and combining strategic initiatives, it can be easy to overlook the unraveling.

Right now, it’s clear that Facebook’s historic perception has fallen out of sync with its own version of reality (on multiple levels). Brands are typically introspective.

Although it sounds a bit delusional, drinking your own Kool-Aid, and encouraging your staff to do so, is the surest way to create positive growth.

So, how would you know or recognize when your own brand is becoming ‘dissonant’? You need to look for the signals. There might be an increase in customer service calls, a decrease in sales, or customer sentiment slipping away.

Every company needs to systematize accepting the idea that, especially when they take their eye off the ball, they are fallible.

Two years ago, Mark Zuckerberg thought Russian fake news influencing the US presidential election was “a pretty crazy idea.” Fast forward to 2018, where Facebook is putting all hands on deck to understand how it could have even happened, and how to stop it.

Clearly acknowledging the evident problem, and responding to it, was far from Facebook’s natural instinct.

Your company cannot fix its perception problem unless it first accepts it. To do so, you must fight your default urge to deny that there may be an issue. When a mess has been made, you need to own it. Only then can it be cleaned up properly.

Customers like it when brands admit they have screwed up. Doing so validates their own perceptions, and suggests work has begun to improve delivery quality. If you need proof, just look at Domino’s.

In 2010, after years of worsening reviews, the company finally agreed with customers, launching its biggest ever ad campaign: “Sorry we suck.” The result? A therapeutic moment of internal introspection which prompted a transformation in product quality.

Fast forward to 2018: Domino’s pulls off their filling US pothole stunt and culinary greats like David Chang are proclaiming their love for the pizza. You’d be hard pressed to find a better brand turnaround than this.

The problem with not acknowledging your brand is susceptible is that you create no channel through which your customers can tell you just how hard you are, well, sucking.

You risk customers conveying frustrations with the company through other available channels, like social media.

You probably set up your company’s Twitter account primarily to broadcast cheerful, positive content to customers and prospective users. But companies often find that their marketing channels become sounding boards for consumer disgust.

Even worse, this all takes place in public. Suddenly, your marketing channel has turned in to a shit show, and the costs for staffing it are going up and up.

Reach salvation, instead, by implementing a stakeholder feedback mechanism, through a channel that you own. A perfect example of this? What you see on highways every day.

Logistics companies whose trucks wear “How’s my driving?” stickers are more likely to get direct feedback that can lead to important driver re-education – a better outcome than either lingering customer resentment or a call to 911.

This is, of course, much more difficult to achieve for digital businesses. This is particularly true for a  business like Facebook, who may not be able to learn from what other similar businesses are doing because they are unique.

However, you still have to find your digital “How’s my driving?” in order to succeed. Using a separate brand-controlled domain allows you to move away from reactionary damage control.

This gives your team breathing room to focus on solving the actual problem, not putting out fires and playing the public relations rep.

Following the Cambridge Analytica scandal, it’s clear that Facebook became the center of a costly and embarrassing public relations debacle and, rather then blaming users for not understanding its “byzantine terms of service”, Zuckerberg should have more quickly owned up to the issues facing the company and admitted fault.

While he eventually apologized and maintained it was Facebooks’ responsibility to protect customerdata, it’s clearly been too little too late.

Most companies lack such a feedback mechanism. Depending on your use case, it likely needs to be a system connected to your CRM – after all, many customers today are reaching out through public socialmedia, only to be told they need to authenticate before a query can be handled.

Will we ever see Mark Zuckerberg become a trustworthy public figure again? Will the backlash stop? Mark might have started holding his company accountable too late, but it’s never too late for other brands to learn from his mistakes.

Read next: Want to know how to make cloud computing really work? This is the AWS training you need