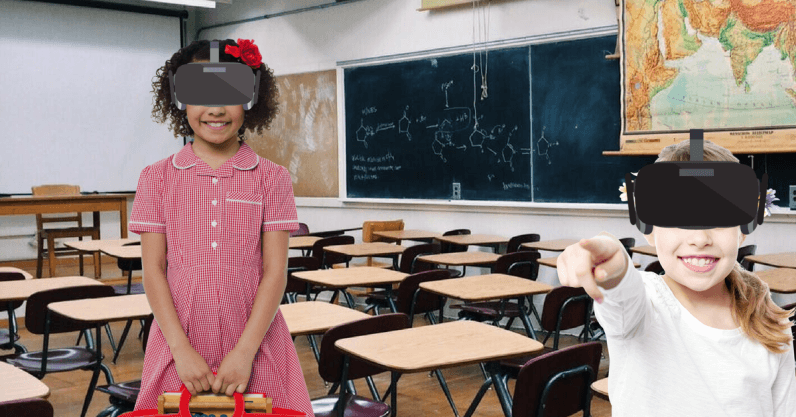 It’s your first day at a new job, and you’re stuck going to corporate training. But instead of going to a training room and listening to the HR director drone on about the vacation policy, you’re directed to the IT desk.

You’re greeted there by a friendly college intern. “Welcome to work,” she says, handing you a box. “Here’s your VR headset. Enjoy orientation!”

Gut check: How do you feel about this scenario?

A recent survey found that approximately half of professionals would be interested in learning something new in a virtual reality environment.

So regardless of whether the idea of virtual training makes your heart skip a beat or stop altogether, you’re in pretty good company.

The question is — is this the right direction?

It might be. There hasn’t been a ton of research done on the educational uses of VR, but the one in-depth study that has been done was optimistic.

Researchers created a virtual castle (“the memory palace,” named for an old mnemonic device of the same name) and placed pictures of various celebrities throughout it.

One group of research subjects got to explore the castle using a VR headset while another group explored it using a computer and mouse.

After exploring for a while, each group took a break for two minutes and then went back to the castle. This time, all of the pictures were replaced with question marks, and the subjects had to remember which picture went where.

And—shocker—the VR users did better than the computer users. Therefore, obviously, VR is a more effective teaching tool than a computer—right?

Not so fast. Even though VR beat out desktop computers in the memory palace, there are other factors to consider when it comes to education.

One possible explanation for VR’s success in this study is the novelty effect, which basically means that newer technology will always give an initial bump in learning outcomes just because it’s new.

Chances are, at least some of the subjects who got to use VR to explore the memory palace were having their very first VR experience. Their minds were blown. Their interest in the new technology probably drove them to explore every nook and cranny of their virtual environment and memorize as many details as possible.

Meanwhile, their counterparts on the desktop computers sat there, completely jaded to the mystical connection of mouse and screen.

But the novelty effect alone shouldn’t make us completely discount these findings. A couple decades ago, researchers were doing similar tests comparing computers to TVs and frankly being a little overly pessimistic that computers would be the wave of the future.

Now that we live in a world where TVs and computers are equally un-novel, I don’t think you’ll find anyone who would argue that Schoolhouse Rock is a more effective teaching tool than Khan Academy, even if the songs are better.

A better reason to be leary of a VR cure-all

Let’s imagine a slight variation of the memory palace experiment. Test subjects still explore a castle, and they still find portraits of celebrities, but this time the portraits include some biographical information about the celebrity.

Then, after they’ve explored the castle and taken a two minute break, the subjects have to recall as much biographical information about as many celebrities as possible.

My hypothesis for this experiment would be that the computer users would actually perform better. Reading information off of a computer screen and recalling it later is old hat.

The test subjects in the VR environment would be so excited about exploring their surroundings that they wouldn’t want to take the time to read and retain information.

But in the actual experiment, where the subjects needed to remember the location of pictures instead of biographic data, the propensity to run around and explore was beneficial in completing the task at hand.

The more enjoyment you get out of exploring your surroundings, the more likely you are to remember details about what you see. In that situation, it should come as no surprise that VR brought better results than a desktop computer.

Another possible follow-up study would involve physically constructing the memory palace and seeing how well people recall memories of a real castle compared to a VR one.

My money would be on VR as long as the technology retains its novelty, but if it ever becomes as mundane as a desktop computer, I bet the real castle would produce better results.

What training contexts are best suited for VR?

The real challenge in applying VR to education is figuring out which topics VR would be the best teaching platform for.

This is not a new concept. There’s been an ongoing debate about online vs. in-person training for as long as online training has been an option.

And there’s really only one answer that’s always right: It depends on what you’re teaching. So VR won’t ever be the best tool for every single learning situation because no educational tool can ever claim that honor.

But VR education will be very well suited to situations where physical location matters—but only when a non-virtual version of that location is unavailable.

For example, if you really are welcoming employees to their first day of work, it would probably be more effective to give them a real tour of the actual building instead of having them wander through a virtual reproduction.

But if you’re teaching interior design or training a batch of private investigators, VR might be the best possible educational tool.

And let’s not forget about AR (augmented reality). Instead of providing a fully immersive experience like VR does, AR inserts virtual elements into your view of your real surroundings. AR is currently being explored as a platform for training firefighters.

This is a perfect match. You can have your firefighters or other rescue workers running around in a real building while dealing with virtual hazards. This might be the best possible way to teach a dangerous job in a safe environment.

But not all of us need to take (or deliver) that kind of training. If you’re an HR director tasked with explaining medical benefits to a batch of new hires, maybe it’s best to stick with powerpoint for now.

Read next: Ticketmaster to close its loathed European resale sites