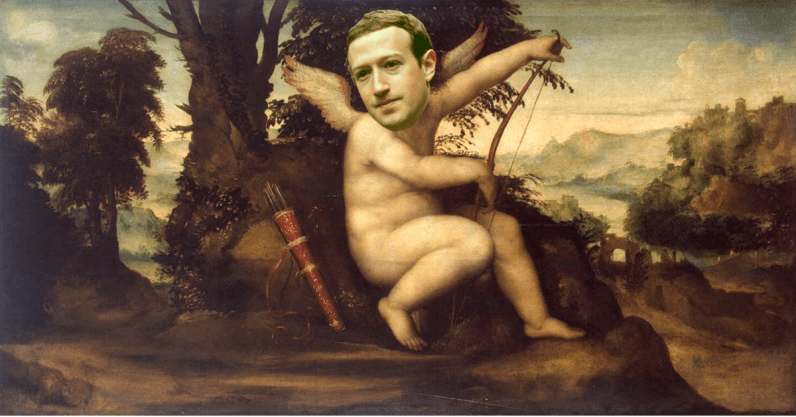 When Facebook announced that it would be launching a dating app, shares in Match group (which owns Tinder), immediately plunged by 22 percent — later to recover after its positive profit announcement. Clearly, investors — as yet — are undecided on whether users are going to abandon the likes of Tinder, Bumble, Hinge, and Happn in favor of the world’s most used social media platform.

Bumble has already suggested they’d be open to partnering up with Facebook, while Tinder has expressed pleasure at the announcement — arguing it will help to end online dating stigma. This perhaps suggests that they, themselves, don’t see Facebook as a threat. Or, it could be a bluff.

But can Facebook offer anything that Tinder or Bumble — which both use Facebook data — can’t? The sheer amount of information Facebook has on us could make it a great place to find a partner. As well as knowing our friends, family and others (as any app using Facebook data would) — it also knows how much we interact with those users, the ones we talk to and who we tag the most. Arguably, it knows who we like more objectively than we do.

That’s the theory — but would it work in practice? Can Facebook turn data into dating?

An argument for ‘yes’ comes from the fact that evidence (and often anecdote) would suggest we are not entirely honest on our dating profiles.

Christian Rudder, one of the three founders of OKCupid, demonstrated our dishonesty in his book Dataclysm. He found that although straight men aged 25-50 stated that they were interested in women only a few years younger than themselves, when it came to rating the attractiveness of photos of prospective dates they consistently rated pictures of women aged 21-22 as the most attractive, regardless of their own age.

Men’s behavior — the ages of the women they send messages to — sits between their stated preferences and the ages of those they rate as most attractive. This highlights a difference between what we say, think and do when it comes to online dating.

Christian Rudder also found that the average height of men on OK Cupid was two inches taller than the average overall for men, and that four times as many men claimed to earn over £100k a year as actually do in the population. Either men are lying, or women are systematically avoiding settling down with taller richer men.

It’s not just dating apps where we lie about ourselves. Only 16-32 percent of people even will try to claim that they are honest online, while only between 0-2 percent expect honesty from others, suggests a study from 2016 led by Drouin.

However, Facebook has a secret weapon. Our Facebook ‘likes’ reveal more about us than we’d like to think — perhaps suggesting that even though we are prone to lying in our status updates and Instagram feeds, there’s still a lot Facebook can tell about us that may help in its quest to match us up. In a study of how people’s ‘likes’ could form a view of their personality, it only took a computer looking at 10 likes to understand a person better than their colleagues, 70 to outperform a friend and 150 to beat a close family member.

And in fact research has shown that using Facebook data can create more realistic pictures of someone’s personality than self-reporting surveys (the method used by some other online dating sites), due to the potential for bias, such as inflated self-perception.

In a world of logic, where our behavior is always rational; it makes sense to partner with people who are interested in the same things as us. Surely, the more aligned a set of interests, the better the match?

Turns out, compatibility isn’t quite as predictable as ‘matching interests’. In a study of online dating, psychological scientists argued that there is no compelling evidence that algorithms work any better at fostering romantic outcomes than other methods. This is partly because those algorithms are based around factors long thought to be essential, that may just be complementary — like a mutual obsession with pottery classes. And there is very limited scientific proof that matching personalities creates successful relationships.

Facebook, therefore, is unlikely to be any better at matching us with out future partners. However, its wide user base, ease of access and extraordinary ability to keep us hooked on using the platform (even in the face of recent data scandals) suggests that it may not be about ability — just as compatibility isn’t always about interests.

When that red notification (triggering our dopamine responses) means more than a picture being liked, but may represent a potential love interest — Facebook may just have found its way back in among the millennial generation.

Read next: UX designers, stop the jargon and keep it simple