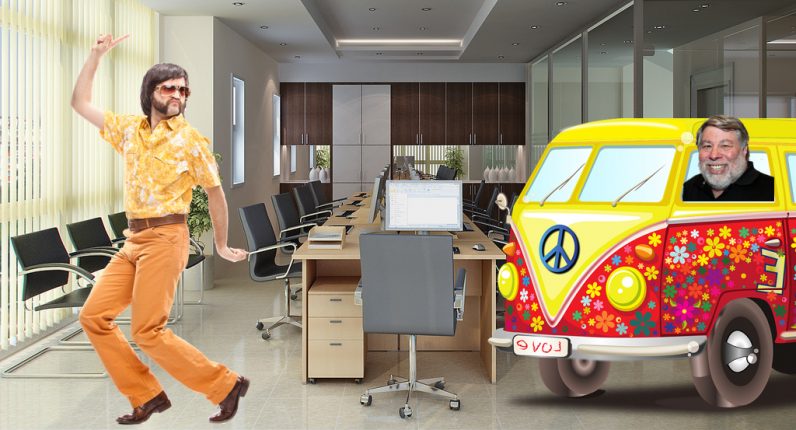 The most visionary programmers today dream of what a robot could do, just like their counterparts in 1976 dreamed of what personal computers could do.

In 1976, if you had a creative idea for software or dreamed of writing your own computer programs to earn money, you were screwed.

At that time, there were only three choices for the independent programmer:

Then in 1977 something miraculous emerged: The “Trinity”. The Apple II, the Commodore PET 2001, and the Tandy TRS-80 (affectionately known as the Trash 80) all were released, as if out of nowhere. And all of a sudden, developers who had been quietly dreaming of what computers could do for their jobs, their personal business, and their incomes were in seventh heaven.

For the first 3 or 4 years, pretty much the only buyers of these three computers were programmers because these limited machines just didn’t DO anything that a consumer might want. Yet they unleashed the untapped creative dreams of thousands of ordinary women and men, who in turn enticed the rest of us onboard.

The Trinity came out with a very simple — and powerful — value proposition for programmers. These computers were:

True, they didn’t have vector graphics or much memory, but to have your own computer (that you could take with you in your car!) that did actual computing— it was truly a miracle.

Suddenly, tens of thousands of inventors unleashed their creative ambitions upon the world. In a relatively short time, these men, women, and kids invented all of the modern uses we know and love for personal computers — games, word processors, art tools, spreadsheets, and databases.

Computers went from being strictly industrial to affordable and easy to program, and they were bought by programmers of every stripe:

I should know… I was one of those STEM teens in the earliest days of personal computers whose parents invested in a Commodore. And that single investment by my parents opened up a world of opportunity for me.

Here’s the thing. When you substitute “robot” for “computer”, this sounds exactly like the world of 2018, not 1976. But what’s a developer to do today who believes in robots as the next world-changing software platform and is ready to take advantage of it?

Today’s web, mobile, enterprise, or STEM teen developer who dreams of what robots can do has only cumbersome, limited, or very expensive options.

Still, there’s no Trinity… yet. Because as sure as I’m sitting here, these robots are being developed in China, in Israel, and in the United States. We’re at the cusp of the emergence of actual general-purpose, easy to program, consumer-priced robots that do almost everything (sadly, hands/grippers are still ridiculously expensive).

But there are doubters. Critics of the idea of multipurpose programmable robots fall into two categories:

Once these developers are empowered with a robot that’s general purpose, affordable, and easily programmable they will shock the world. They’ll invent tens, hundreds, thousands, and eventually millions of uses for robots in the office and the home. Then, finally, we’ll reach 1981 again (circa 2022), when the modern equivalent of IBM enters the personal robot market and “validates” an ecosystem that will already be thriving with millions of robots performing a vast array of useful and creative skills.

And those early robot developers will tell their grandchildren “look at how I changed the world.” Just like their micro and mainframe compatriots do now.

Read next: Start a six-figure career as a project manager with this $29 training package