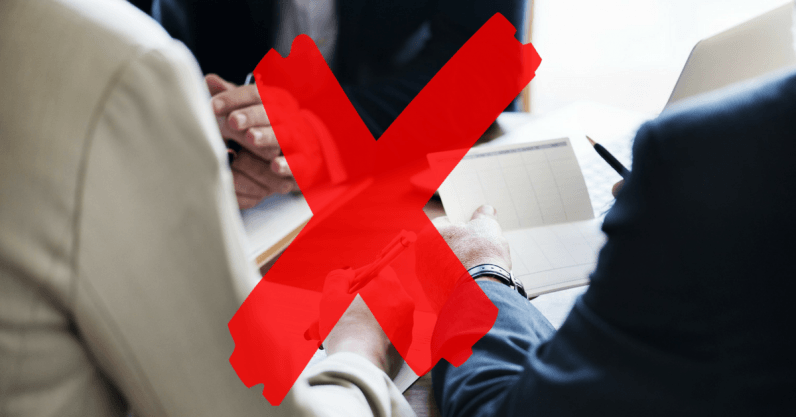 Throughout my nearly three-decade career in the venture capital industry, I’ve had the privilege of meeting innovative teams and looking at next-generation products on a daily basis — especially in areas such as artificial intelligence, machine learning, cybersecurity, and virtual reality.

Today’s tech startup landscape is vibrant and exciting, but it’s also important to underscore that it’s a crowded landscape with many contenders vying for VC attention and funding. There are some basic components any VC will look for before investing, including the founding team, the market opportunity, and the technology involved. In addition, a strong business model, a track record of success, and the ability to illustrate your thoughts on a product’s fit into the market are crucial. Beyond the basics, I’ve consistently seen common mistakes that often steer me and other VCs away from investing in a tech startup.

For instance, my team and I met with a founder who pitched an idea in the hospitality space, but he had absolutely no transferable experience in the sector. It was obvious he didn’t fully understand the domain and that his learning curve would be significant. Consequently, we felt like he would make too many mistakes, so we chose not to fund his company.

New market conditions also feed into the competition and decision-making process. For example, from 2015 to 2017, the industry saw many record valuations, including the rise of “unicorn” startups and, in some cases, the demise of those companies. While the best way to catch a VC’s eye in this competitive, potentially lucrative, but somewhat volatile climate is to be referred by a mutual colleague, that might not always be a viable option. But don’t worry — there are other things you can do (and avoid) in order to connect.

These are the common pitfalls you need to steer clear of in order to capture VC attention:

A great VC will come in with a coach’s mindset, and it’s important for entrepreneurs to be open to guidance and feedback. Of course, it’s natural for founders to be attached to their strategy and business model. However, a talented VC can bring a fresh perspective to the company and leverage his or her previous experiences with other companies to suggest adjustments that will accelerate the startup’s growth and success. These are important adjustments that can make a huge impact. I call this process “knob turning.”

VCs also seek out entrepreneurs who are open to taking constructive criticism and learning from mistakes. Those who are open to being coached and willing to make changes to improve their business or management style are likely to become great future leaders.

I’ve learned that it’s important to ask poignant, direct questions during the due diligence phase. Through early interactions, you can gather a lot of insight about the entrepreneur’s character. Here are a few critical questions I ask before investing in a startup:

Sometimes, the way a person responds to a pointed question is all I need to know in order to understand the future working dynamic and relationship.

At all costs, avoid a herd mentality in which a wave of new companies is created in the wake of a successful one. Usually, a startup will come to my team with an idea that we’ve already heard of because several other companies are attempting the same thing. If this is the case, it’s usually too late to invest because the “early mover” advantage is lost.

Instead, I seek to back the first players in any space because they will get to the market faster and undoubtedly gain an advantage. There are obviously exceptions, but more often than not, timing is everything.

My team has seen the importance of timing over the years. Back in 1997 and 1998, optical networking held great promise because the need for widespread internet access was paramount and the existing telephone infrastructure was not suited to the demand. As a result, a whole swath of dot-com companies emerged.

Betting on this trend, we funded a company that was run by sharp founders who were the first to solve this particular problem. A few years later, Cisco bought them for billions. After the sale, it was interesting to watch 80 to 100 other startups crop up with the same idea. A few years later, all of those companies (except for one called Ciena) had died off.

Establishing your startup’s place in the overcrowded tech industry can feel like finding a needle in a haystack. Of course, this is an exciting time for entrepreneurs itching to jump into a thriving industry, but diving in too quickly can easily detour even the most confident founder. Instead, prepare for the inevitable bumps in the road, and embrace the learning curve. Armed with expertise, flexibility, and a unique advantage or solution, VCs will identify the promise in your startup and push it toward success.

Read next: Flickr has been acquired by SmugMug - so where should you store your photos?