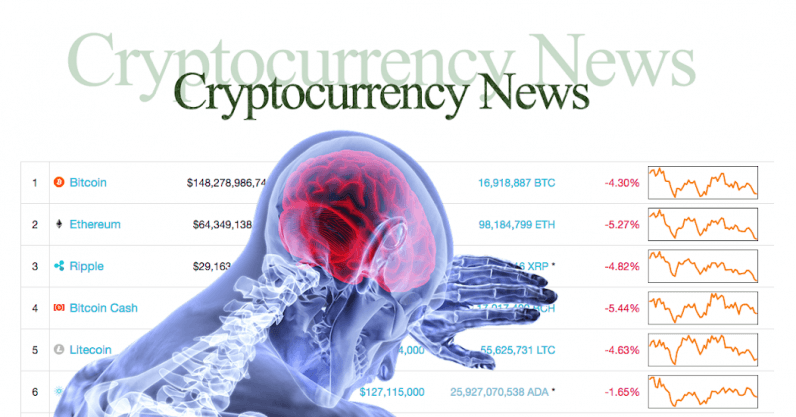 It’s not a great day out there in the cryptos. Bitcoin nearly hitting $8k, Ethereum down to $616, and Stellar barely worth 25 cents. What a world!

The end of the line

So this guy thinks that Bitcoin is about to burst and it has no value, which would suck I guess. What’s funnier is that CNBC REALLY loves to get these people on that have one of two opinions – Bitcoin will be worth 7 billion dollars or zero dollars. I don’t really know how they get away with this weird emotional tug-of-war but I’m absolutely there for it.

CNBC also blamed the Bitcoin crash on Google banning cryptocurrency ads. What confuses me here is why anyone would conflate these two things – did people advertise…Bitcoin? I don’t even get why Google is doing this and not banning the hundreds of really, really crappy investment ads you get where it’s some guy with a giant bald spot saying “I CAN TURN $4 INTO A TRILLION DOLLARS WITH THIS ONE TIP.” Ah, who cares about standards.

Copy-pasted water titans the Winklevoss Twins said that there should be a “Virtual Commodity Association,” as in a self-regulatory market for cryptocurrency, run by the people who stand only to profit from cryptocurrencies doing well or doing what they want it to.

Save Bitcoin from Bitcoin

Bitcoin and your family. from Bitcoin

Meanwhile, people are having a very normal, not racist reaction to the price going down.

What is today’s Crypto scare? Just went on my phone and saw that we had a 10% drop again. Let me guess… Some little Third World country said that they did not want to use crypto currency, or maybe the Chinese decided they were going extend their lunar holiday, maybe Bitcoin didn’t eat her wheaties from Bitcoin

Subdued Market is a Welcome Opportunity from Bitcoin

The only one who truly understands me – a pitt bull trained to fight, knowing nothing else, ending up in the pound, from which she rescued me. We saved each other. A word of advice: Don't come between us. pic.twitter.com/nvAy21rHa8

I can absolutely imagine John McAfee going all John Wick on someone.

Read next: I still hate email, but I love Canary