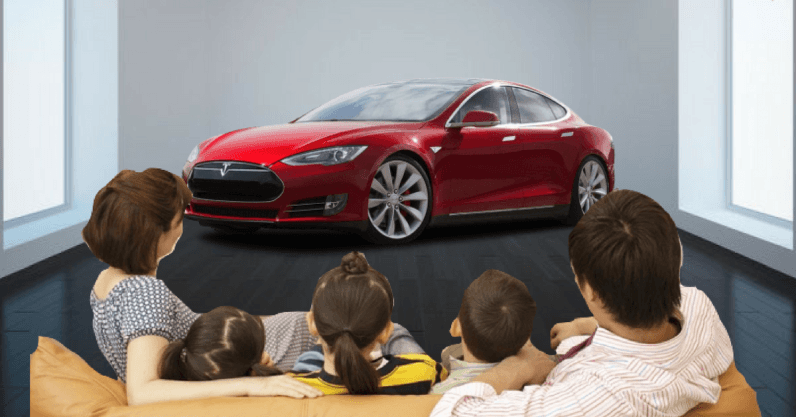 Many people have taken to the term “smartphones on wheels” as a go-to phrase what the cars we drive are starting to become. None less than Dieter Zetsche, Mercedes boss, car industry soothsayer and a man who knows a thing or two or thing about the auto industry, made this observation in 2015.

But I think Herr Zetsche’s comparison is a little premature. I can certainly see why people want their cars to become like smartphones. But I think cars are going to diverge a lot from what we saw with the smartphone, and that they share more in common with another device we all use: the TV.

The car-as-smartphone-on-wheels case is an easy one to make to, well, just about anybody who has set foot in a car before. It goes something like this: cars in 2018 are a bit like cell phones in 2006.

They work, they’re functional, but they aren’t winning any awards on the usability or user interface front (with a few notable exceptions like Tesla), and are about to be disrupted by beautiful, usable car products made by one of the usual suspects (Apple, Amazon, and Alphabet). In this scenario, the car becomes a software platform, providing access to hundreds of services and apps that transform the way we use our vehicles.

The problem with this vision is that it doesn’t consider the structural differences between the car and phone industries. Cars today are a low margin business — auto manufacturer margins commonly run in the single digits. In its mid-noughties heyday, Nokia’s operating margin for its devices business still ran at 20-25 percent. This gave new entrants much more to play with than car economics do today.

And where cars really diverge from smartphones is the business model. The thing that really fueled the smartphone wars was the fact we started replacing our phones every two years, and 90 percent of us (in the US, at least) took post-paid cell phone contracts where the device was at least partially subsidized by the cost of the subscription. This rapid turnover of devices forced manufacturers and software providers to innovate rapidly.

Cars are the opposite. They’re expensive. Most of us, millionaires and serious auto enthusiasts aside, don’t replace them that often — about every six to ten years, depending on where you are in the world. This dynamic seriously hinders the “smartphoneization” of cars (not helped by the fact that most cars have a two to three year lead time between design and production).

There are better parallels today between cars and TV than cars and phones. Like cars, TV’s core technology has remained unchanged for decades, and mostly “works,” although the development of electric cars will change that. Like cars, the addition of connectivity and new user interfaces also haven’t significantly changed the way we use the device. They just aren’t that different from their equivalents of 10-15 years ago — whereas my usage of my iPhone bears almost no resemblance to how I used my Nokia 3210 back in 2001.

And like cars, TV is a vertical that Silicon Valley has yet to really disrupt — although not for want of trying — because economics and industry structures have made it difficult to do so.

Then, there’s data. More and more of us are connecting our sets to the internet. This means we get to watch Netflix and, theoretically, we see advertising that is more relevant to us via better targeting. But it hasn’t really changed the core experience. It’s the same with cars. Your connected car produces a huge amount of it just in the time it takes you to drive down to the store and back.

Thousands of organizations — insurance companies, city municipalities, companies providing parking services, mapping companies — are interested in accessing this data. But it’s hard to claim that this data has significantly changed the experience of driving your car.

So, when will my car become a smartphone on wheels?

These dynamics means the short- and medium-term future of cars is going to be much more like TVs than smartphones. Some will get nicer user interfaces. Most will get more bells and whistles — for Netflix on my connected TV, think the ability to remotely-lock my connected car. But both will remain single-usage devices, for the most part.

So, will your car ever become a “smartphone on wheels”? I actually think it will. But ironically, this will probably only happen when it’s no longer your car anymore.

The time when people stop holding on to their vehicles eight to ten years will be the time that we see new and exciting services around the car. Car manufacturers would like this to happen via us buying new cars more often. It’s far more likely to come about with autonomous driving, the impact of which is far more wide-reaching than us being able to kick back and enjoy Netflix and pizza in our cars without having to watch the road.

What autonomous driving creates is the ability for a cars-as-a-service model to thrive. Car ownership is already declining; most forecast it to do so further with autonomous vehicles. Why would we bother to go to the hassle and cost of owning and maintaining a car, when we could get most places we needed by hailing a car a few minutes away?

In other words — this shift will happen not when we replace our vehicles more quickly, but when we don’t own one at all. As autonomous becomes a reality, I think we’ll see new and existing companies provide genuinely innovative around services, free of the need to do so around expensive, low-margin technology with low replacement rates. At this point, I think cars really will become like smartphones on wheels — even if fewer of us have them in our garages when this happens.

Read next: Brain implants are happening — are you ready for yours?