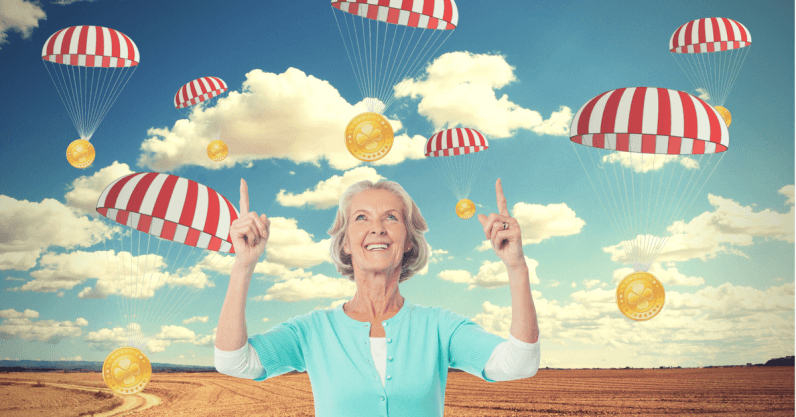 Token ​airdrops, which​ ​is​ ​basically​ ​when​ ​a​ ​blockchain project ​decides​ ​to​ ​distribute​ ​free​ ​tokens ​to​ ​the​ ​community, aren’t a new phenomenon in the crypto world. Airdrops became increasingly popular throughout 2017, primarily due to ICO fatigue and increased regulatory uncertainty for token issuers.

Lately, there’s also been a trend towards blockchain startups raising more of their funds through private sales, leaving less tokens available for purchase from individual investors during the public sale, and with some projects even replacing the ICO with a community airdrop altogether.

I wanted to find out about the reasons behind these strategies, and potential consequences for the crypto market, so I reached out to Jamie Burke, CEO at Outlier Ventures, a venture firm that specializes in cryptoassets and decentralized web technologies. Outlier tracks innovations in the token market including ICOs and airdrops and provided me with some new insights.

According to data provided by Outlier, one of the most prominent projects to replace their ICO with an airdrop was Byteball — a Direct Acyclic Graph based distributed ledger. During their airdrop last year, the project simply required individuals to send a signed message from their Bitcoin wallets and took the number of Bitcoins in their balances as an indicator of how many coins should be disbursed to the individual. Equally, another well known project that deployed massive distribution through an airdrop is Stellar who spread 16 billion XLM (Stellar Lumens) to Bitcoin holders in June 2017.

So why do projects choose the airdrop route? Could they not potentially raise more funds through public sales, and still manage to build community through airdrops in addition, as part of their PR campaign?

Jamie Burke tells me that while there is a current trend towards increasing airdrops, there isn’t yet anything to indicate that ICOs will be replaced by them entirely. However, he does think they would supplement them, primarily in the case of utility tokens where an initial batch of early adopters are needed to try the product and validate its legitimacy.

Airdrops can be compared to the freemium model — individuals are given early stage free alpha access to a product (which is eventually monetized) — to generate on-platform network effects which then drive demand for the underlying utility token. It’s kind of like a voucher to try a platform.

Although rarely the case, there are even companies doing an airdrop after they finish their ICO. CoinFi and Sharpe Capital are examples of this, having recently done their airdrops. A possible reason for this approach could be that a large amount of individuals are required to hold tokens to creative positive sentiment in market to your product. Post-ICO, however, you realize that a handful of accounts that donated heavily during the token sale (typically whales) now hold the majority of tokens, giving you a token distribution unfit for generating active market insights.

In order to capture the interest of average users and have them engaging with your platform, you may want to design an airdrop to attain a larger distribution. This particularly holds true for market sentiment platforms that require large numbers of users giving sentiments to truly generate “wisdom of the crowd.”

Many projects also raise capital from VCs or pre-sale buyers with SAFTs (Simple Agreement for Future Tokens) in place. Once this is done, they build a basic product and deploy it to gauge consumer interest and do A/B testing on the product itself.

So basically, airdrops are relevant in cases where more value is generated through a product’s traction than from fundraising alone. When distribution and network effects produce more value than users simply holding on to a token, airdrops provide an effective distribution mechanism.

In Burke’s and Outlier’s opinion, one of the ways in which an airdrop might help reduce regulatory risk prior to a token sale itself, is through validating a product and its utility before a public sale. By deploying a product and distributing free tokens for real world users to try the product, teams have been positioning a token generation event as a utility token distribution, and in some cases even booking the raised amount as revenue.

The idea being that if a usable platform has been deployed and distributed tokens have an immediate and demonstrable utility, then a regulator is less inclined to see an ICO purely as a speculative asset. It’s common for companies to state that a token generation event (TGE) is a sale of access to software and not an investment.

How do you become eligible for an airdrop?

A standard airdrop usually involves some KYC process or simply holding tokens in a chain of the developer’s choosing, and it’s designed to be as open as possible and requires little to no effort to acquire tokens.

To understand how projects decide which tokens or cryptocurrencies to partner with for their airdrop, it’s useful to look into the specifics of executing one. An airdrop is giving away cryptocurrency, but how do you give it away securely and with minimal effort for those receiving the airdrop? Sending around private keys is not an option, because the project would have a copy of the private key, as would anyone capturing the communication.

For that reason, targeting existing holders of a cryptocurrency is an attractive solution. They already have a wallet and hold their own private keys, which allows the airdropper to provide them access to airdropped tokens securely. Also, existing holders have some affinity with cryptocurrencies in the first place and are likely early adopters. Generally, the cryptocurrencies with the most holders, Bitcoin and Ether, form interesting targets to reach a large audience with a single airdrop.

However one of the concerns Burke states is that here you are often just replicating the wealth distribution of existing token economies, which to date is largely in the hands of speculators, not users. This can include many tokens going to exchanges themselves. Furthermore these random airdrops can become a new and unwelcome form of spam.

In the case of Ethereum, there is a close knit ecosystem of projects building on top of it. Airdropping to Ether holders is therefore a logical choice for projects in that ecosystem. Additionally, Ethereum has the benefit of broad adoption of the ERC20 standard, which lets receivers of the airdrop discover the tokens they received through their wallet software or a block explorer, like Etherscan or Ethplorer.

There’s no action required by the receiver, the airdrop itself is the communication channel. Such an airdrop is more like door-to-door distribution — every address on a “street” (the blockchain) gets some tokens, and larger “houses” (addresses) get more.

Bitcoin and other cryptocurrencies don’t currently have such widely supported token standards, so they require a different communication channel to mobilize holders to take part in the airdrop, and require the airdrop receivers to take action. An airdrop like this can be compared to going online to learn about a product, then ordering it, and getting it for free.

Burke believes that, as other cryptoassets gain wider adoption, they could become attractive as airdrop targets, especially for projects building on top of them at the application layer, as we have seen with Ethereum.

The crypto space is only starting to understand the mechanics and economics of airdrops in token economies, and there are probably yet undiscovered consequences of distributing tokens this way. It could potentially lead to more centralized projects, as fewer people are able to participate in the sale and only receive smaller amounts through airdrops.

Crypto exchanges play an important role, and will increasingly do so if airdrops grow as a way to spread tokens. As centralized exchanges hold cryptocurrency on their clients’ behalf, they control large wallets, and are eligible to receive significant amounts of airdropped tokens. However, it’s entirely up to the exchanges if they want to distribute the tokens to their customers or keep them for themselves, as it does require effort on their end.

For an exchange this would mean signing a message with various private keys of cold storage wallets, which require a high level of security clearance. Secondly, there is the effort of fairly distributing the airdropped tokens among the clients of the exchange, and communicating to them about this.

In practice, we see that exchanges sometimes take this effort, and sometimes they don’t. And to Burke, the decision process seems arbitrary raising questions about backroom deals. For example, the Stellar Lumens airdrop to Bitcoin holders was distributed by Kraken but not by Coinbase.

If airdrops become more prominent as a distribution mechanism, we can expect exchange users to become more vocal about receiving them. On the other hand, it can be argued that airdrops are meant to reach those who actually control their cryptocurrency and intend to use it, rather than store it on the exchange for day trading, so in many cases airdrops not being distributed through exchanges might actually be of benefit.

Furthermore there are privacy concerns. Taking part in an airdrop might mean disclosing information about one’s cryptocurrency holdings, as does communicating about having received an airdrop. As an example, the OmiseGO airdrop distributed tokens to Ethereum addresses with over 0.1 Ether in them, proportionately to the Ether value. If someone would post “Wow, I just received 1,000 OmiseGO tokens!” on social media, that would reveal they were a significant holder of Ether.

Finally, as is the case with many parts of cryptocurrencies, airdrops are another opportunity for scams and require good security procedures and great scrutiny of the participants. There have been various cases of scammers announcing an airdrop for projects where there had never been one, or announcing additional airdrop rounds for projects where there had been — thereby speaking to the feeling of FOMO for those who had missed the original airdrop.

There have also been cases of new tokens which were announced as an airdrop or a fork, but in reality were scams with no intent of actually producing a new token. Invariably the scam requires victims to either send cryptocurrency or submit private keys to “participate” in the airdrop, while in reality they will lose all their funds.

Burke says the idea of printing your own money to buy market share is obviously a very appealing one, but given anyone can do it there is the danger it could get out of control and just become an annoyance as a form of ‘token pollution.’ However, strategically applied to select groups of potential users critical to network adoption it could be a powerful way to effect better wealth distribution in the system to a general token sale. If you want certain people to be your users, seek them out instead, explain why you want them on board and find a way to have them become token holders.

Burke concluded our interview by saying that in a space which has seen a lot of greed and a lack of diversity, he would love to see projects use airdrops to encourage the participation of individuals, organizations and companies that are committed to social benefit and diversity. Let’s hope the days of the white paper only, plain money grab ICOs are about to come to an end.