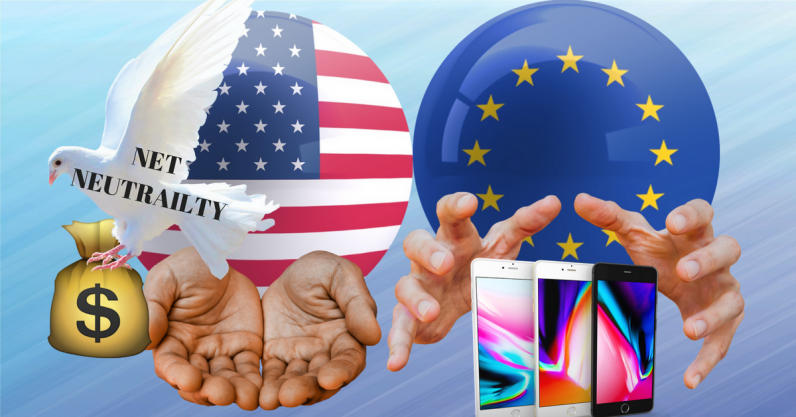 To the great dismay of internet advertisers and publishers, the US Federal Communications Commission voted to do away with regulations ensuring net neutrality in December 2017 — protections largely seen as vital to keeping the internet open and free. On the contrary, the government argued, freedom from the burden of net neutrality will help the economy flourish and innovation soar.

But we all know there’s a catch: Without mandated net neutrality, internet service providers gain complete control over the flow of digital content, leaving everyone else at their mercy.

Net neutrality is still alive and well, it’s just across the Atlantic ocean, in the European Union. In fact, the EU now stands as one of the largest markets where net neutrality still reigns. The 2015 open internet law established commercial regulations that permanently prevent European internet service providers from favoring or discriminating against particular internet traffic, and demands transparency from all ISPs operating in Europe.

Essentially, net neutrality holds that everyone in the digital universe should enjoy free and open access to all information on the web, visiting any site they choose, and get the same level of service every time — always equal to the level of service all other users receive.

US net neutrality regulations, enacted in 2015, were designed to protect users from the possibility that powerful internet service providers like Verizon, Comcast, and AT&T might speed up or slow down service to specific sites, or even block particular content or sites.

The idea was to give every internet user a fair chance to access content from any source. Now that net neutrality regulations have been struck down, ISPs in the US are free to favor some sites over others, providing speedier service to sites that are potentially profitable to them, say, or otherwise of interest to them. If your site isn’t among those favorites, you’re stuck on an uneven playing field, and you’ve got plenty of company.

Despite it’s seemingly bullet-proof laws, the European Union can actually be quite lax in making carriers play by the rules. Operators may still favor certain apps, streaming services, and TV networks. What’s more, European operators are allowed to sell “packages” of content, known as “zero-rating,” where certain services are offered without data limits, and others can be slowed down.

Sweden’s Telia Company offers unlimited access to Facebook, Spotify, and Instagram, for example, while access to other media companies is still constricted by data consumption limits. In Germany, Deutsche Telekom offers StreamOn, which allows users to access unlimited videos and music from partners like Netflix. Both of those relationships drew pointed criticism from activists, demonstrating that when it comes to net neutrality, there are no perfect worlds.

Even so, European users have many more mobile carriers to choose from — there are four major telcos and nine more low-cost offshoots in France alone, for instance — resulting in a more competitive environment for operators and more options for users.

Plus, Europe doesn’t have the sort of mega-mergers between carriers and content providers we’ve seen in the US (Comcast and NBC Universal, Verizon, and AOL). EU carriers are spared the fear that carriers like these will favor their own newly-acquired content, to the loss of other content providers.

It appears that US telcos will benefit most from the end of net neutrality — they’re in the driver’s seat today, with the power to decide which services they’ll favor, based on their own business interests. Further down the road, though, users and their preferences will determine revenue and affect the sites that get highest priority.

Consumers will demand more personalized experiences from the telcos, and ultimately their demand for unlimited data plans will balance out the operators’ favoritism toward certain content providers. In contrast, a subscription service scheme continues to predominate in the EU.

We’ll have to wait and see how the end of net neutrality will change the US telco industry, and how the regulatory environment will compare to the shifting European Union environment. Most likely the differences between the two regions will continue to grow.

Will anyone benefit from the repeal? Will market forces drive revenue, or will telcos take the wheel? And how will it all change the face of the internet as we know it today? With these questions and more hanging in the air, it’s a safe bet that net neutrality is going to be a hot topic around the globe this year — so keep an eye out.

Read next: Why UX designers need to understand the psychology of users