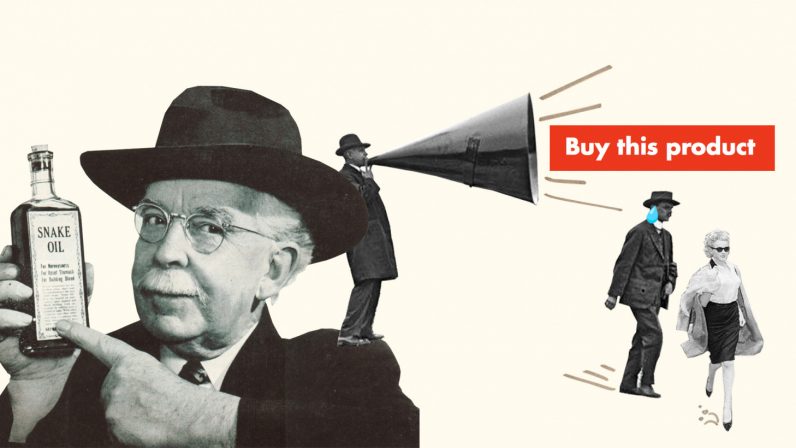 Like most people, I hate advertising. I hate it because of its manipulative nature, its constant nagging, the off-target communication, and for trying to literally follow you everywhere and trampling your privacy along the way.

Luckily some companies are trying to do things differently. They try to earn a spot in your life. By sharing knowledge, giving guidance, and actually becoming relevant in your life.

But first I’ll explain why I hate advertising, and why it deserves it.

All ads contain a form of deceitfulness and have an imbalance between what the product actually is and what absurd or exaggerated story they choose to match it with.

Advertising doesn’t bother too much with pesky reality and has helped accelerate many dubious payoffs and products. The industry is known for promoting things like smoking and fast food with a straight face. They are guilty of publishing overly photoshopped fashion and makeup campaigns that create unachievable beauty standards and have ruined many young people’s self-image. Not all advertising is lying however, some of it is ironically, actually true.

“Once you pop you can’t stop!” For Pringles, it’s actually true. Research has shown that the salt on the chips drives the neurons in your brain to hunger for more. Your brain doesn’t really register that it has had enough salt. Which can in the long term result in cardiovascular disease. Many people in advertising have taken little responsibility for these types of insights and are often the last to find their moral compass.

To make an already bad situation worse, the development in tech has made ads become even more intrusive by giving them tracking abilities. Behind the ads now lies a dark world of data collection and distribution. Not to better service you but to better target and track you. Which they call tracking but might as well have been called surveillance.

If you don’t like advertising, like me, you must have had a great time seeing the ad industry struggling in recent months. Two of the biggest spenders on advertising, Unilever and P&G, are putting less money in advertising each passing year.

The reason why the biggest players are decreasing their ad spending is because they find the system for online advertising murky at best, and fraudulent at worst. Which sounds quite ironic to me, considering that we’re talking about ads here, which one could argue are there to con people into buying a product — so not exactly the antithesis of murky/fraudulent.

We ad-haters can also celebrate the increase of adblocking, with over 26 percent of the desktop users blocking ads and around 16 percent on mobile. This is quite a large feat considering how difficult it is for less tech-literate users to set up adblockers. Adblocking is actually the largest boycott of anything in the world.

Scandals like VW had with its “clean diesel cars,” which turned out to be not so clean at all. VW’s complementary deceitful campaigns were a treat to watch as well. No wonder overall trust in companies is at an all time low at 35 percent according to the Edelman Trust Barometer. Companies are producing terrible ads and continuously losing their customers’ trust — it’s time for some change.

However, it would be naive to think we could get rid of all advertising for good. With over $542 billion flowing through the system in 2016 alone — it’s still a force to be reckoned with. I do however see a shift towards companies acting more as guides rather than sales people, flipping the traditional relationship so that they first prove themselves useful, trying to earn a spot in your life with relevant content, then sell their product.

Maybe it’s wishful thinking on my part that this shift is at all possible, but some disruptive brands might have already set this paradigm shift into motion and are reaping the benefits while others are still stuck in old methods.

How to properly spend your ad dollars

Casper, the online mattress company, has become popular due to people sharing their “unboxing” videos, with customers filming their newly delivered mattress unfurling from its tiny box.

But Casper also ‘advertises’ itself through content marketing by producing articles on separate sites like Van Winkle’s and now Woolly — which are both run by journalists independent of Casper.

The articles focus on health and wellness — topics that are beneficial to everyone — but without any mentions of mattresses at all! By sharing information that’s valuable to their potential customers — and also aligned with their brand’s vision — Casper is charting a sincere and successful route to financial success.

I noticed that it changed the perception I had of the brand. I almost felt like I owed the company something because they gave me such great insights — and that’s the perfect way to advertise! I get entertainment and/or information, and instead I might decide to pay some attention to your brand. The choice is mine.

Another brand that used their ad dollars and spent them on something relevant which doesn’t irritate me to death is Under Armour, which battles giants like Nike and Adidas in the world of sports apparel. Under Armour’s secret weapon is the extremely helpful MyFitnessPal smartphone app.

The app has all the typical features for a health app: weight tracking, step counter, and contextual advice, but where it really shines is in tracking your diet. The nutritional value of nearly every food in the world has been entered into their system — by consumers, by the way — so you only need to scan a barcode and the nutritional info appears as if by magic. Plus, they use big data to find out what the most successful users of the app are eating.

By becoming a daily utility, Under Armour has turned me into a nutritional god and slowly but steadily I started to notice the company’s clothing more in the streets. It was almost like everybody I saw was wearing it and a thought crept into my mind that I should maybe acquire some Under Armour apparel…

Under Armour managed to sneak into my consciousness, but I feel they did it fair and square. I got a valuable app and they got brand awareness. Many brands have also been successful by simply sponsoring a valuable service, rather than providing it themselves. Citibank is the sponsor of New York City’s Citi Bike, a bicycle sharing system.

Citibank reported that following the launch of Citi Bike in 2013, the public’s perception of the company improved by 17 points. Citibank was seen as a more innovative company and as one that valued social responsibility. By aligning themselves with a useful service, Citibank has seen tremendous brand recognition throughout New York and turned people’s opinions of the company around.

This truly baffled me because Citibank was at the center of the economic meltdown, but it seems that was quickly forgotten in New York, simply due to the sponsoring of some bicycles. To be honest, I’m not sure how I feel about that, but at least the image restoration of the bank was achieved by giving people something positive, instead of just bombarding them with ads.

As you might have guessed, these types of initiatives don’t necessarily represent all aspects of a company. After all, Casper has sued mattress review sites and tried to wrangle better reviews for their products and Citibank had a company wide focus on subprime mortgages, which made them tumble during the financial crisis. It’s still advertising. But I believe these service-oriented campaigns can change a company’s DNA for the better.

These are the early steps of companies breaking through the advertising clutter to connect with audiences. They find new ways to become relevant and available in their customers’ lives.

Can you imagine what good it would do even if you only manage to channel a fraction of the $542 billion total ad spend to something more relevant and useful? The impact would be enormous! There would also be less frustrated people on earth, because there would be less useless ads. So saving advertising has an easy fix, put your marketing budget into initiatives that give people something.

This is the right time to set yourself apart before adblocking rises even further and trust declines even more. Now is the time to reboot your ad strategy and build on a more service oriented relationship with your customer. You can start small, that’s ok. Move your ad spend from sales to being of service and come to the light side, it’s the only way.

Read next: Voice assistants are making the smartphone redundant