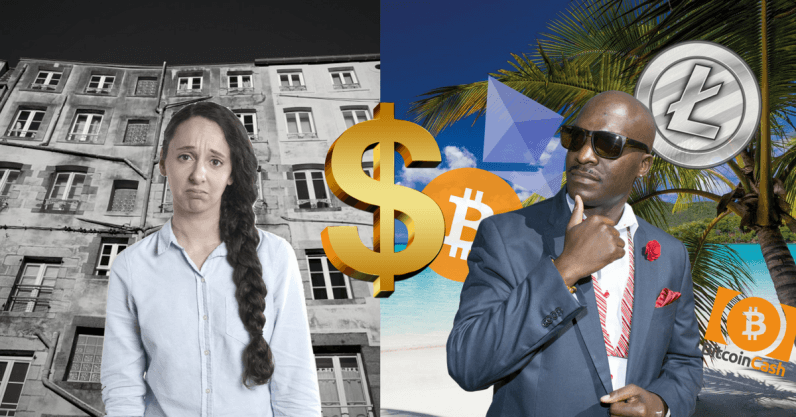 I’m guilty for making fun of people betting obscene amounts of money on cryptocurrency because I know I’m safe. I’ve personally only put in money that I can afford to lose. When I see someone put $25,000 on Bitcoin, I laugh, but I also feel bad. When I see a forum of people potentially losing hundreds of thousands of dollars, I’ve posted it and everyone’s had a good chuckle.

But deep down there’s something really sad, really painful happening. It’s a global phenomena where people are able to (very, very quickly) be part of a financial movement that in the past has rewarded people with triple-digit percent returns, one that doesn’t require you to understand a complex stock market, but simply see that a coin is worth $X and predict — somehow, and it seemed likely at one point it would — become $Y, a higher number.

As I write this, anyone who invested close to Bitcoin’s peak and didn’t sell soon after — fearing that they’d miss out on an almost certain rise to $50,000 a coin — has almost certainly seen his/her investment disappear.

I finally decided to write this piece — after it had languished in drafts for about a month — because of the launch of Litecoin Cash which I brought up in my latest cryptocurrency newsletter.

If anything cryptocurrency has truly become the libertarian nightmare — you can truly take over a new cryptocurrency if you have expensive mining hardware, or have the funds to buy in early (or, indeed, get free coins from forking).

It’s not even 24 hours into Litecoin Cash mining, and already several huge pools exist to specifically not “allow legacy SHA256 hardware” to mine a brand new currency — they want to conquer it, to mine it.

Even getting Litecoin Cash from the fork was predominantly rewarding those with deep pockets (i.e. those who could afford a lot of Litecoin could claim 10 Litecoin Cash for every LTC they had) or with mining hardware. Just so we’re clear, a “cheap” SHA256 (used to mine Bitcoin and Bitcoin Cash) unit is still thousands of dollars and sounds like a miniature jet engine, costs tons of money in power and still costs thousands.

People seem to think that cryptocurrency is some sort of equalizer, a massive redistribution of income that is somehow good for the world at large. However, for at least a year, it’s become exactly the opposite — it’s another way for the already-rich to become richer.

The argument against this is that inherently “anyone can get in on any new coin” — that you could theoretically look at GruntCoin and invest $500 in it and it could become a bazillion dollars. Questionably responsible articles like this one from New York Magazine suggest that someone can simply “walk into” this industry and make $80,000 overnight — masking the fact that this person says the following:

So even when Bitcoin was at its cheapest in a long time, this guy still had $12,000 to exchange, and all of the faux-anxiety laced in this piece falls flat when you realize that he started with what is an incredible amount for most people. Worse still, he talks about a time that one random coin investment went to $80,000. This is a thing called “luck” not “investment strategy.”

Cryptocurrency is gambling masked as investment for 99 percent of people. The argument for ease of access is the same as a casino, except slightly safer and much slower. Take $100, put it on a number and hope that number hits. Yes, you can pull your funds and there are few 3’s or 7’s that can truly roll to wipe out your investment, but if you bought at the wrong time, guess what? It’s probably destroyed your investment.

If you have the cash, you can theoretically pick up and hold currencies in the hopes they go up, except there’s the important detail that you’re probably not gonna get rich off of it anymore without being rich in the first place. You’re not getting rich off of Ethereum or Bitcoin unless you have the capital to buy an absolute shit-ton, or able to buy enough mining rigs to fight off the increase in difficulty that years of other people mining it has created.

You’re not gonna get rich off an ICO, as they’re becoming increasingly gated and requiring six-figure investments. Public sales of valuable coins barely happen anymore. You can’t read the tea-leaves, you can’t see the future. Though a year ago I suppose you could have made a lot of money, you still needed to put up at least $1000 — which isn’t a reasonable amount for most people. Furthermore, most people would have (fairly) classified it as a stupid investment.

We’ve enjoyed rags to riches stories since the junk bond trading frenzy happened in the ’80s — we love the idea that anyone can walk in and just get that paper. The horrible truth is that while there may be more access to the supply of cryptocurrencies, there most definitely isn’t the income equality that would mean that “anyone” can get rich.