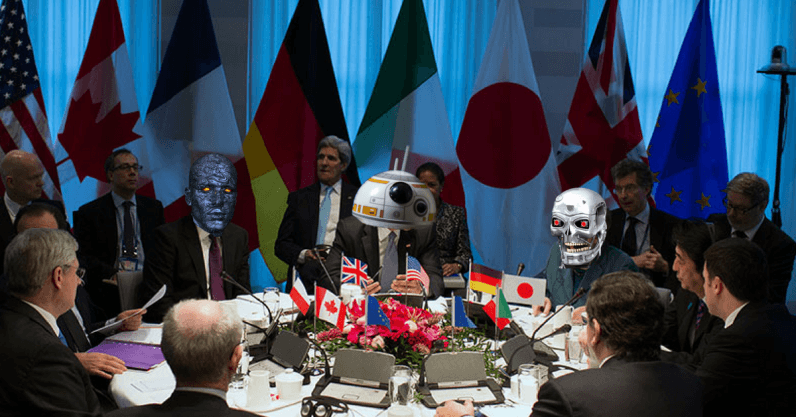 Imagine, if you will, a President of the United States that truly understands AI’s potential: how to use it, when to trust it, and how to stop it if necessary.

Is this prospect terrifying or exciting? It’s hard to say for sure. It seems obvious that up-and-coming generations will bring a new, if not radically different perspective to government, in part because they are the world’s first digital natives.

While those born in the mid-80s were early adopters of technology in their teenage years, younger millennials and the following generation Z, will be more familiar with innovations like AI, VR, and robotics by the time they get to Capitol Hill.

Having used these technologies throughout their entire lives and educations, tomorrow’s leaders are certain to have an edge on their predecessors. With luck, this will give them a natural grasp on the implications of tech like AI, and where it might provide useful solutions to fiscal, social, and geopolitical concerns.

To nurture such leaders now, however, we will need to amp up innovation in classrooms across the country. Should AI edtech be implemented in schools with care, I believe we’re on the cusp of what could be a game-changer.

As you might expect, today’s politicians bring with them to the public sector the values and methods they were raised and educated with (or without). As late adopters of technology, the average baby boomer is less familiar with AI and other emerging technologies than younger adult generations, who have interacted with it since their youth.

For better or worse, boomers are a product of their time. The limits of their education system have resulted, at times, in lingering old-school perspectives — and at worst, in a misunderstanding of historical and scientific realities.

Technology was not common in the classroom until the 2000s; prior to this, most students dealt with a handful of instruments: calculators, projectors, and basic computers. With email only gaining prominence in 1995, well into boomers’ young adulthood, it’s no surprise that the government lags behind when it comes to important issues like cyber security, or that real-time fact-checking is such a new and controversial phenomenon.

With machine learning only now hitting its strides in consumer electronics, informed AI policy will likely lag even further. But you can bet it will hit classrooms sooner — in fact, it’s here already.

AI in the classroom

Today’s students have their own set of issues, stemming from funding deficits, teacher shortages, and the constraints of Common Core standards. But when it comes to technology, a whole new world is on the horizon. With tablets in the classroom and tech in the curriculum, digital natives are as at ease with tech as their parents were with #2 pencils.

Many believe that AI will soon be in the classroom, as both a learning tool and subject. It’s already used as a learning tool by online classes like Coursera and Khan Academy, which take an adaptive approach to education.

The combination of AI and VR could also be groundbreaking for modern students. Writes Graeme Lawrie, Director of Innovation and Outreach at the UK-based Sevenoaks School, “We are moving away from simply ‘learning’ a subject or topic to ‘feeling’ the content. This is not simply an engagement tool or a gimmick… it allows a student to explore, to experience or to be involved in something, as if they are actually present in that environment or place.”

Besides creating richer and more customized learning experiences for students, AI could also help identify teachers to fill employment gaps, and automate certain aspects of teachers’ jobs (like this professor’s virtual TA) to alleviate stress and make space for creativity. With edtech poised to steal the show, Common Core standards will need to, at the very least, adapt to meet the times.

For children who grow up with Siri and Alexa, and machine learning investments arm races by every major tech company, make no mistake that AI will be top of mind by the time they are able to run for office. Keep in mind, an AI accurately predicted Trump’s presidency when the smartest pundits failed.

Future leaders will need to address the consequences of AI, like automation and unemployment, and as such may favor policies that supplement the income of citizens who lose jobs to automation. The Obama administration created a roadmap for AI policy that future administrations will need to use as a foundation to minimize its threat and optimize its advantages.

If immersive learning experiences do prevail in schools, future politicians may also have a uniquely empathetic take on history and science, having felt and engaged with it instead of reading and forgetting about them. Experiences associated with emotion are more readily stored in long-term memory, and you can’t repeat history if you felt like you were there.

Moreover, some believe it’s probable that future leaders “will start by turning to AIs to help them analyze complex situations and to game out optimal scenarios.” Human judgment is often flawed, and though AIs do inherit the ideals of their creators, they could at least assist in rational, emotion-free decision-making.

As it stands, all signs point toward a more informed and tech-savvy government body decades down the line. But as today’s issues grow exacerbated with time, or go unaddressed for too long, will it be enough? Or will tomorrow’s politicians be behind the curve of even newer advancements we have yet to conceive of?

Children have always been the future, which is why education is perhaps the most important way to shape what’s to come in a positive way. As technologies like AI emerge more in the mainstream, they will become second-nature to digital natives across the country and world.

It could be a good while before the US elects a millennial president, let alone a Gen Z leader. But with every generation comes fresh insight, and with the help of AI edtech, a richer understanding of the past as well.

And while issues like income inequality, climate change, and terrorism may seem insurmountable, one thing is for sure: only the very best tools and schools will give us a chance to take them to task. It would be wise to invest accordingly.