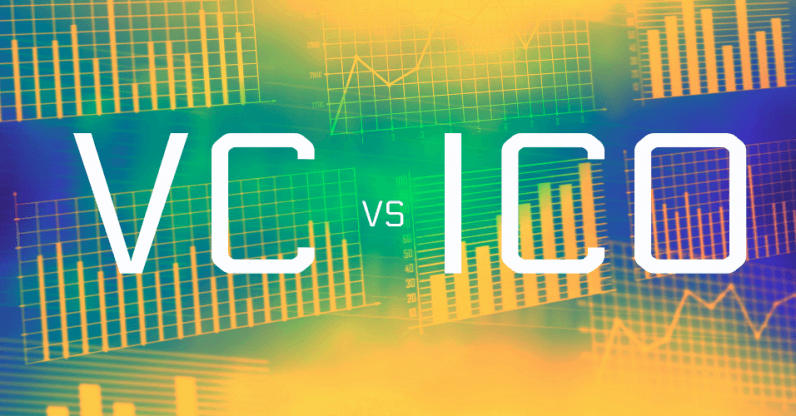 Wouldn’t it be awesome if you could just blindly throw some money into a pool and magically make good returns? Well, that’s kind of what’s currently happening with ICOs (also known as token sales) and this is evident from two data points — the initial token sale price and current sale price (analogous to traditional company shares).

ICOs are clearly on the rise and they’re steadily moving into the realms of the Venture Capital industry, threatening to take its place. VCs also operate on high returns by betting on startups, so it’s quite clear that they soon undergo a huge transformation due to ICOs.

In fact, VC firms will either flourish or get eliminated depending on their value addition beyond capital delivery in the rapidly evolving startup funding scene — it’s up to them how it plays out.

Now, let’s try to get a grasp of what’s actually going on in the current markert with a good old fashioned data-backed analysis.

Comparing the return — ICO vs. VC

We’ll begin with the ROI of ICOs — because frankly that’s what most investors are interested in — let me start by explaining how I prepared the dataset for this study. There isn’t a complete database of initial prices of all the completed ICOs on the web, but there are sites like ICO Stats and Token Data that track sizeable number of tokens.

I was able to combine the available data from the above-mentioned sites and create a dataset of 155 tokens (152 are from 2016 and 2017) with initial sale price and current sale price. You can download the dataset from the following link.

After I calculated the ROI of all these tokens, the average value came to a whopping 1373 percent, which roughly translates to 14-fold return. To put things into perspective, let’s assume that we’ve got a really great VC firm that can yield fivefold return in a span of five years (being highly optimistic). Here’s a chart depicting the return on $1,000 investment in both ICOs and startups by VC firms.

Now that we’ve established that the returns given by ICOs are way more than the ROI of traditional VC investments, let’s examine the funds raised via this mode from 2014. Here below is a chart depicting the total ICO funding till September, 2017 (dataset downloaded from Coindesk):

The chart shown above tells that cumulative amount of more than $2.3 billion funding have been raised till now. And, ICOs are here to stay primary because of the following factors:

Pitching for a symbiotic relationship

Now it’s time to address the central question: Looking at the previous pointers, should we consider ICO a threat to VCs?

The short answer is: Well, not immediately. In fact, just like crowdfunding and online syndicates, ICOs can actually complement VC firms. Since ICO model has huge potential with long-term implication on the way business is done, VCs must look at the benefits that this market brings and adapt.

One of the major issues plaguing the traditional VC space is the timeline to realize actual return via IPO or acquisition. However, with ICOs, investors are free to trade their tokens for other promising projects at anytime after the brief lock-in period (which is becoming a trend lately).

This will work similar to how public stock exchanges work — convert the investment into fiat currency or acquire other tokens via crypto exchanges. The ‘Smart Contract’ feature of tokens ensures that the rules are always followed which eliminates the probability of founders faking the numbers to show higher traction for higher valuation.

However, the major impact that VC firms have is what can be termed as ‘smart money’ — the network and the vast collective experience of building and scaling technology companies. While ICOs solve the issues of capital required to start the business, they cannot solve the guidance requirement that’s available with VC firms. This also means that the investment firms that only contribute via capital, would cease to exist.

In this context, note that the major bottleneck for VCs would be the absence of bulk shares or the controls they usually get via traditional investments.

Moving towards a robust market

The current ICO market might have its fair share of pump and dump schemes along with warnings or restrictions issued by regulators around the world, but it will eventually mature with better regulations and investor security features. Some of the practices could be implementation of escrow accounts in ICOs (prohibiting people from getting away with money) and integration of norms such as KYC and AML (Anti Money Laundering).

Amidst all these, the positive news is that the mainstream VC firms like 500 Startups, Andreessen Horowitz, and USV have started participating in the blockchain and cryptocurrency market. There is also emergence of unique VC fund like Blockchain Capital, that is specific to only blockchain projects. In fact, Homebrew (a seed VC firm) had internal discussions around raising capital via ICO.

ICO market is in its nascent stage, but it is poised to bring about great transformations across all the industries. Finally, for VC firms this should be about backing blockchain projects with potential to take the world towards utopian future more than anything else.

Read next: Find out why Bitcoin is rocking world markets (and make some serious money) with this training