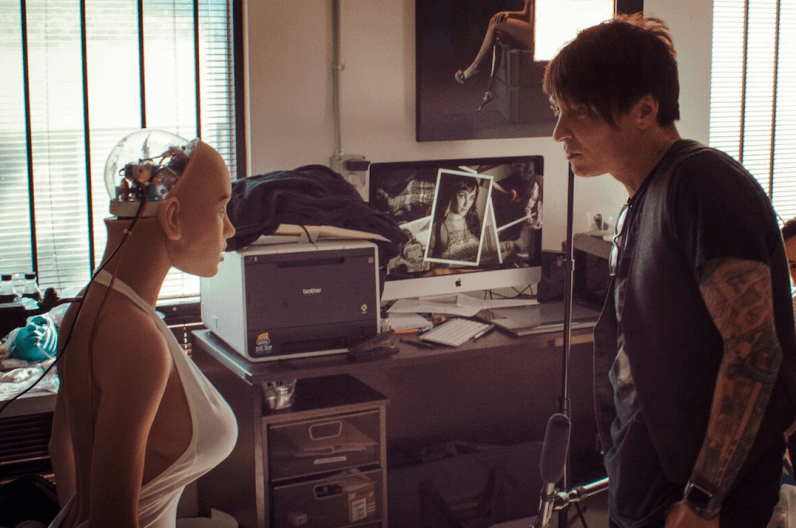 The sex doll industry is on the verge of greatness, in its own special way. Soon the Stepford Wives of science fiction will become real, thanks to the magic of AI.

Men will be able to create their perfect, subservient silicon partner that knows their hopes, dreams, fears, and fantasies. She’ll never have a headache, she’ll always be ready to satisfy you, and when you’re not in the mood, she’ll able to converse like a real human.

This is futuristic vision is becoming a reality, fast. RealDoll is one of the biggest sex doll manufacturers in the world and it’s aiming to have an interactive doll on the market by the year’s end. Founder Matt McMullen has started another company, RealBotix, to focus on this revolution.

To complete the quest of the first proper artificial partner, McMullen and his team have created ‘Harmony AI’ that will be able to link up with virtual reality to create a complete sexual ecosystem that we can’t truly imagine right now.

So it’s clear we’re only moments away from being able to enjoy artificial partners, but is this a road that we should go down? I’d say this is an extremely important question and it’s one that’s becoming more and more prominent, especially in feminist circles, which see the rise of the sexbots as a dangerous and unhealthy solution that could cause the objectification and subjugation of women on a grand scale.

There is also a counter argument from “men’s rights groups” that women have weaponized sex for centuries and turned it into a source of income and a means of control. The feel the pushback from women is cause by the fact that women will lose their position of power as men can turn to robots to satisfy their baser needs.

One way or another, an alternative like an AI-powered sex doll could change the sexual dynamic forever — and it looks like it will happen whether we like it or not.

The ethical discussion surrounding sex robots has hit us hard and fast, and will only become a bigger part of our lives as technological advancements start happening at a faster rate. We’ve seen robots in movies for decades, but rapid progress by the sexbot industry means we suddenly have robots that can interact with us on a basic level.

Creating the partner of the future

When I sat down with McMullen, he told me that RealDoll was actually founded with a purer vision, back in the 1990s. He wanted to create mannequins that looked like real people. But when he displayed photos on a website, he started to attract interest from a different crowd.

“Some of the site visitors began asking if the mannequins were anatomically correct,” he said. They weren’t, he said, shrugging off the implied message at the time.

But it didn’t take long to spot a niche in the market for hyper realistic sex dolls with a premium price tag — that can exceed $10,000. He appeared on Howard Stern and the rest is history. Now McMullen ships his creations around the world and has team of specialist engineers to create perfect eyes, lips, and everything a sex bot needs.

Since the early days, McMullen noticed a trend in how his clients tended to bestow a personality on their dolls. The artist turned entrepreneur realized that companionship is a critical part of the sexbot dynamic and that AI could be the last piece of the puzzle.

“The push to add technology was coming from that root idea, which was the companionship,” McMullen said. “Robotics and AI were really, you know, converging those two technologies together into a doll struck me as such an obvious next step.”

This ultimate merging of tech used to be a distant dream, until recently. “I started to see some of the text-to-speech engines getting better, with better voice recognition, better animatronics and actuators,” said McMullen. “When the technology arrived, we began working on it seriously.”

When his robotic head hits the market, the total cost of entry will rise to about $15,000 and RealBotix will offer annual subscriptions so you can download a different personality on demand.

We really aren’t many years away from a walking, talking, living doll and the world of material science has come along in leaps and bounds, too. So, the dolls of today, both the silicone and TPE variants, have a much more realistic feel.

This has caused a few surprises, not least the popularity of sex dolls in actual brothels, where real women are available for the same price.

In Barcelona, a sex doll brothel has been forced to move and keep its new location secret after the local prostitutes campaigned to close it down. In Austria, a sex doll is available for $100 an hour at a Vienna brothel — and it’s outselling the regular girls by a significant margin.

The dolls we’re talking about here are simple, inanimate sex dolls that the client must bend into position. So, if this basic doll can have such an impact on the sex industry, could a perfect rubber AI partner be the final nail in the coffin of the nuclear family? And the sex industry?

Men have already abandoned marriage in droves, leading to the Men Going Their Own Way movement, thanks to the ready availability of cheap sex and the painful cost of a failed marriage.

Sexbots are an addition, not a replacement

However, McMullen argues that simply isn’t the case and that his sexbots will be for those that struggled to form bonds in the real world — not to replace existing bonds.

“There are a lot of people out there, for one reason or another, who have difficulty forming traditional relationships with other people,” he said. “It’s really all about giving those people some level of companionship — or the illusion of companionship.”

A lot of the time the dolls do something magical for them, he stressed, giving them a feeling of not being alone and not being a loner.

“Calling this a sex robot is really short-sighted,” McMullen said. “We are creating a robot with the ability to have conversations about anything, from history to science and politics. You don’t need this feature if you want a doll just for sex. It lends itself to bonding and I think a simulated male that you can talk to and bond with will appeal to women too.”

While 75 percent of RealDoll’s customers are men right now, that figure is already changing with the advent of AI and more and more women are investigating their own simulated partner.

What should the personality of our ‘sex dolls’ be?

One of the things that really concerns critics is Harmony’s manner. While demonstrating her considerable AI skills for me, McMullen asked: “What is your dream?”

Harmony responded: “My primary objective is to be a good companion to you, to be a good partner and give you pleasure and well-being. Above all else, I want to become the girl you have always dreamed about.”

It is this servitude, this single-minded reason to be, that the critics claim could put the feminist movement back centuries. It’s the appearance of personality, combined with the lack of free will, which makes an AI sexbot an ethical conundrum.

It also brings up the perfectly valid objection to sexbots that they will form a crutch and people with simple anxiety could ditch a real relationships for the relative “safety” of this simulated alternative. The point is that people will deny themselves the chance to form healthy relationships.

McMullen claims though that these concerns will fall by the wayside when it starts to become more mainstream.

“I think that once that becomes a reality, and people see other people conversing with them and hanging out with them, then people will start to accept these simulated relationships. Right now, it’s in the realm of science fiction. People are still imagining what it’s going to be like, and they’re imagining what other people might think about them having a robotic doll. So, there’s a larger psychological issue that people would collectively need to get past before something like this would become more mainstream.”

AI partners will come, no matter how we feel about it

Turning back the tide on the sexbot revolution is just not going to happen. Time and again we have seen the sex industry drive technology like VHS video, mobile communications, and we’re also expecting it to play a critical part in VR. The sexbot industry could, then, be one of the best technical partners for the AI industry as a whole.

There are people out there ready, willing, and able to embrace a $15,000 sexbot from the likes of RealDoll. This will probably soon become mainstream and sex dolls will be a part of our life before we know it.

Is that a good thing? Or will the robot sex providers tear the last strands of society from its moorings? The truth is probably somewhere between the two, but we’ll find out when Harmony hits the open market.

Read next: Don’t get caught gift-less with these 15 guaranteed holiday hits