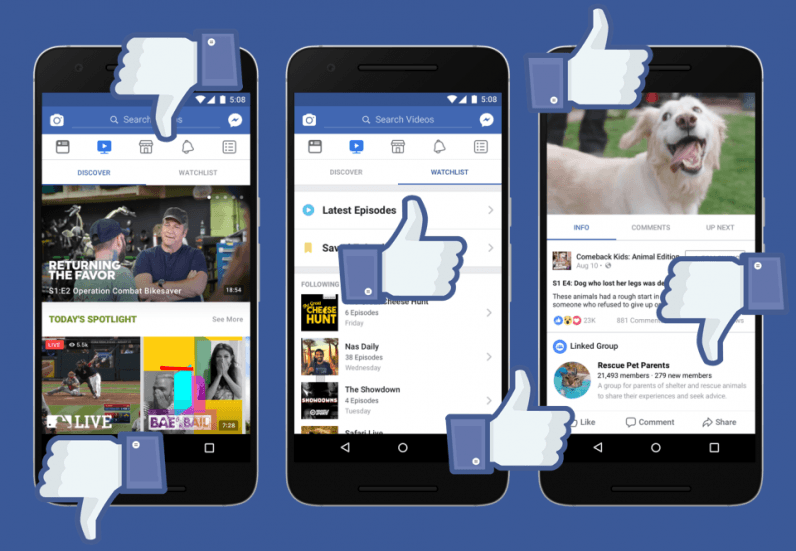 The concept of ‘social TV’ first came to widespread prominence in 2010 as people embraced sharing their wild and wonderful opinions about TV experiences on social media. That same year, MIT Technology Review named the phenomenon in its top ten ‘breakthrough technologies’.

Fast forward to 2017 and social TV is taking on a much different meaning, especially in light of the marquee launch of Facebook’s new platform for TV shows, Watch.

While Amazon and Netflix have invested heavily to become some of the biggest TV makers in the business, without having a traditional terrestrial channel, Facebook is, in contrast, trying to achieve a unified TV experience with social media engagement at the heart of it.

However, they are by no means the first to try and achieve this. Countless online platforms came before them and failed, all of which offer lessons to Facebook and others.

The difficult birth of social TV

Dreams of ‘interactive TV’ were being dreamed as far back as the 1990’s. A decade later, when ‘social software’ began to emerge, the concept took on new impetus.

Software like Tryst helped disconnected viewers watch digital movies together. In a 2005 essay on the prospect, blogger Tom Coates, perhaps inspired by emerging multiplayer gaming trends, imagined ‘a buddy list for television’. This was described as a system that would alert viewers when friends are watching the same channel, would support ambient webcam interactions and which could help plan shared viewing appointments.

Some of these ideas saw the light of day through Microsoft’s Xbox TV ambitions. By 2011, startups like Zeebox were aiming to popularise social TV viewing through so-called ‘second-screen’ devices. That app, later renamed Beamly, was pioneering and award-winning, helping to unite viewers in mobile and tablet chat rooms using a combination of social network accounts, audio content recognition and contextual analysis of TV content.

But, though all of these innovations are fascinating, it’s clear that those dreams have not been realized. Today, hardly anyone watches TV together in a digitally-mediated fashion. Who killed social TV? Fragmentation did.

Whether it was Xbox’s penetration or Zeebox’s popularity, every company that has tried actualizing the ambition has foundered from lacking universality. As Metcalfe’s Law makes clear, for a network to be valuable, it requires adoption by as many potential users as possible.

Now, however, the dreams are coming back in to focus. As the big social networks begin hosting and even buying rights to major TV programming, they are bringing TV into environments that are already dedicated to and replete with social interactions. That is opposite to the way social TV had previously been conceived, wherein a social layer would be injected into TV-viewing devices.

Facebook’s strategy, with Watch, like that of all the other technology platforms attempting to host television shows, is clear. Silicon Valley, where digital display and online video ad growth is slowing down, is eyeing the $75 billion US TV industry, where impressions command a far higher premium, enviously.

Twitter’s efforts in this space are the most notable to date. By snapping up deals to carry NFL, PGA, Bloomberg and a growing roster of live TV material, it is constructing an environment in which programming is easily introduced as the centerpiece and starting point of myriad related conversations about it.

However, the success of social TV should not just be judged on simple TV metrics like the audience it draws nor the ad spend it can amass. No, behind the business story here lays the prospect of reinvention for the intrinsic nature of television as a medium.

Yet, TV’s social future depends on a very simple question: does a network, like Facebook, have an adequately large social graph?

And that’s why Facebook Watch is significant. Twitter’s TV deals may have captured the headlines in the early runnings of the new TV gold rush – but Facebook’s audience is at least seven times as large as Twitter’s.

Facebook’s announcement may have piqued interest for its features like a Watchlist of favorite shows, however, I think its most powerful feature is the one under the hood – its user base.

Facebook’s is the largest social graph in the world. Chances are, you, your friends, your colleagues and your family are all Facebook users. That means Facebook can support the social experience of watching TV together with your closest contacts, right there alongside TV content itself, better than anyone else.

No longer will the ‘social TV’ dream by kneecapped by partial adoption of otherwise-interesting devices, apps or services. Thanks to its underlying breadth, Facebook Watch is in prime position to finally support an environment in which friends watch shows simultaneously, chat during broadcasts and recommend shows to each other.

Or, at least, that’s the theory. Because, if the ‘buddy list for television’ doesn’t come to pass this time, it never will. If Facebook cannot finally realize the long-held vision of in-show social TV interaction, nobody will. No other player can smoothe out the platform and service fragmentation of an entire global industry, save for Facebook’s network comprised of, simply, people.

It is, then, one last roll of the dice for social TV. Will Facebook Watch finally turn television into the social experience we’ve been waiting for or will the dream be abandoned? Let’s keep a close watch.

Read next: We want to give you an iPhone X for FREE! Here’s all you have to do...