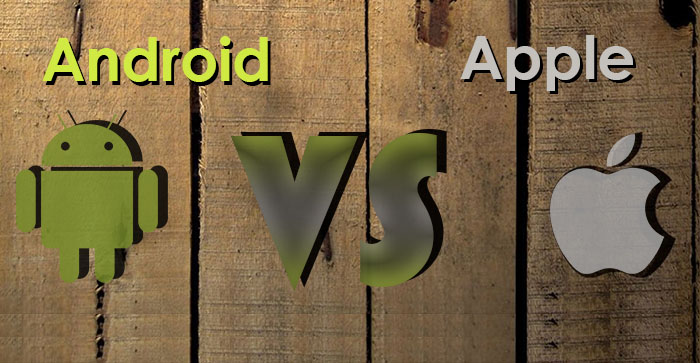 Developing an application can be a daunting task, but launching it shouldn’t be. There’s no simple answer to the question of which one should you develop for first, Android or Apple.

It depends on various number of factors and circumstances which may influence the final decision. Even if your budget allows you to build a native application for every existing platform, various factors should be considered beforehand.

Building a mobile application for multiple platforms at the same time will cost you time and money. Especially if your goal is simply to acquire your first customers. Most customers use only one platform, therefore there is no sense in making Apple customers wait for your app to be released on Android. Also, post release maintenance of applications on two platforms is extremely challenging — it’s far cheaper and less time consuming to fix bugs for one platform.

So it’s best to start with one platform, but which one to choose first? Let’s consider some factors that can help us choose the right one:

Despite lot of platform fragmentation and pain that comes with developing applications, Android is still the leader among mobile operating systems. Survey says that Android owns more than 86 percent of global market share — and is especially strong in developing nations. In second place is iOS, but despite it’s considerably smaller market share, iOS developers make twice the money Android devs do.

Therefore, observing the overall statistics, launching an application on Android allows it to reach a much broader audience. But on the other hand, launching an iOS application allows you to reach an audience with more purchasing power, thus delivering a faster ROI.

There is no clear winner between iOS or Android as far as future prospects are concerned. Both platforms are in good shape and will not lose relevance within next few years.

Giving preference to one platform over another based on those prospects isn’t worth discussing as you won’t be losing in either case.

Although Apple has a smaller total market share, there are some regions of the world where Apple dominates the market and where there’s much greater demand for its products.

Examples include countries with higher standards of living and developed economies like Europe, China, Asia Pacific and America. So take this into account if you have a particular country or region in mind.

By knowing this information it will be easier to identify what type of device your audience prefers. Determining the right platform of course require a more detailed analysis of your target audience.

The cost of developing a mobile application largely depends on its type, complexity and features. Generally, iOS applications can be launched a lot faster as they lack device fragmentation. It’s believed that the entropy created with an Android device and OS fragmentation complicates the development and testing process and will take additional time and money.

iOS users generally have a much higher lifetime value in comparison to Android users. iOS users are more willing to spend money on their apps. This is more reason to create paid and retail applications or an application which offers in-app purchases. From a business perspective, it is better to start with iOS as the customer is more likely to buy additional content or services within the app.

Android and iOS revenue models are representative of different approaches by Google and Apple. Android has a higher percentage of ad-supported applications but paid applications is still very common on iOS. If you are creating a free application and planning on generating revenue via advertising, Android is a better choice to start with.

8) Launching in an app store

For the App Store the registration process is more involved and you have to pay an annual fee of $99. The application evaluation process usually takes about two weeks and there is a higher probability of getting rejected. If that happens you have to wait another two weeks or more. So make sure that your developers have experience in launching applications on Apple App Store.

Although Android is open source, it is locked down by carriers and OEMs, and regularly lags behind iOS in terms of adoption rate of its latest OS version. More than 80 percent of users on iOS are on some version of iOS 8 which came out in September, 2014.

Less than 10 percent of Android users are on Lollipop which first started in June, 2014. Therefore on iOS you can focus on supporting the newest versions of the operating system with certainty that your application will have a broad reach.

The last factor to play a vital role in the decision making process of choosing which platform to develop first is loyalty. Apple users are locked into an ecosystem that encourages them to stay with Apple products rather than switch to another vendor.

It’s more likely that Android users will switch to iPhone and not the vice-versa. With iOS you are able to target a market that comprises a half a billion high-end loyal customers. And these elite customers have purchasing power five times greater than Android customers.

Ultimately, it’s entirely up to you whether you build for iOS or Android first. General advice is to first start with the iOS platform. Reasons are driven by demographics, speed to market and cost. Developing applications on Android first makes sense only if you are targeting audiences that are squarely focused on Android, especially in the developing nations.

Furthermore, during various stages of any application there should be great amount of learning on what is working and what is not working. Try applying all your knowledge across two platforms. Let’s summarize this write-up:

You should look at:

Choose the best option which fits your business!

Which platform would you choose for your business, iOS or Android? Share with us in the comments!

Read next: Use digital marketing tactics to get your business surging — just $15