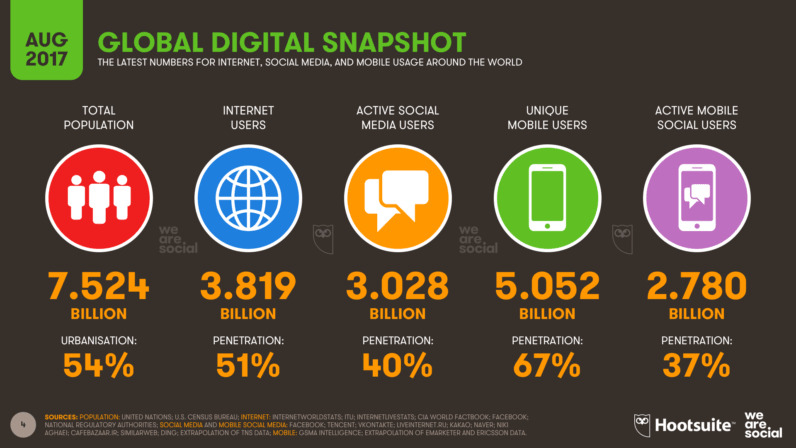 The latest Global Digital Statshot from We Are Social and Hootsuite reveals that the number of people using social media around the world has just passed the momentous three billion mark:

Growth trends show no signs of slowing either, with the number of active social media users growing at a rate of one million new users per day over the past quarter:

JOIN BOOST ONLINE EVENT
There were no comprehensive new reports of internet use in the past few months though, so we’ve been unable to make any major updates to our internet user numbers since our last report in April. However, it’s important to stress that this is purely due to a lack of new reporting, and these figures should not be interpreted as a slowdown in internet user growth. Indeed, the increase in social media user numbers suggests that internet use continues to grow at an equally impressive rate.

You’ll find our full Statshot report in the SlideShare embed below (and you can download it for free by clicking here), but read on for additional context and some deeper insights.

Facebook delivered a significant portion of social media growth over the past 4 months, with the platform surging past the two billion MAU mark to reach 2.046 billion monthly active users at the time of writing:

Other key social platforms posted solid growth in the past few months too, notably YouTube, whose recent updates to global user figures put the platform in second place in our global MAU (monthly active user) rankings, with 1.5 billion active users: At a local level, WeChat consolidated its lead in China, with more than 870 million people in the Chinese mainland now using Tencent’s most popular platform — that’s more than 90 percent of the platform’s total 938 million users.

Despite global user declines, LINE posted growth in its home market of Japan to reach 70 million MAUs in the country.

It was a similar story in neighboring South Korea, where Kakao Talk posted small local gains to reach 42.4 million users in its top country.

VK (also known as VKontakte) had a tougher quarter after the platform was blocked in Ukraine, which put a significant dent in its overall MAU numbers. Facebook was the main beneficiary of the block, with growth in Facebook users in the country accounting for more than 60 percent of the drop in VK’s local numbers in the past couple of months.

It’s worth noting that the global numbers suggest strong growth in messenger apps like WhatsApp and Facebook Messenger too, but these platforms don’t currently publish user numbers for individual markets on a consistent basis, so it’s tricky to map country-by-country performance and growth.

Mobile adoption continues to grow steadily around the world, with GSMA Intelligence reporting growth of more than 650,000 new users each day since our last report.

Meanwhile, the latest data from Ericsson show that our love affair with mobile connectivity continues to strengthen too, with the average smartphone user now consuming more than 2.3GB of mobile data every month via their mobile devices:

This 70 percent year-on-year increase versus June 2016 reflects the increasing variety of activities that we perform on our smartphones. The latest data on mobile app downloads from AppAnnie shows that there are very few aspects of our lives that remain untouched by mobile connectivity: These new figures suggest that mobile phones are now the most important device for two-thirds of the world’s population, whether you measure ‘importance’ in terms of the billions of hours spent playing games like Candy Crush, or in terms of access to life-changing services like mobile banking for the world’s 2.5 billion unbanked.

Google powers more and more of these mobile activities too, with the company’s Android platform again extending its lead in the mobile OS market. The latest data suggest that almost three-quarters of all connected smartphones now run Android, meaning that Google knows more about its users than Santa Claus.

However, with Apple’s iOS share remaining static since the start of 2017, it appears that almost all of Android’s growth has come at the expense of other, smaller platforms. Between them, Android and iOS now account for more than 92 percent of all mobile devices used to access mobile web browsers:

Ericsson’s latest Mobility Report shows that the potential for connectivity continues its relentless advance too, with smartphones accounting for four out of every five phones sold in the first quarter of 2017.

Digging deeper into these numbers though, it’s clear that people are developing distinct behaviours for smartphones versus tablets. This may not come as a surprise, but these findings highlight the importance for business and marketers of approaching these devices differently.

The AppAnnie data (see above) shows that we use our smartphones for a wide variety of different needs, but tablet use appears to skew more towards entertainment and ‘lean-back’ content.