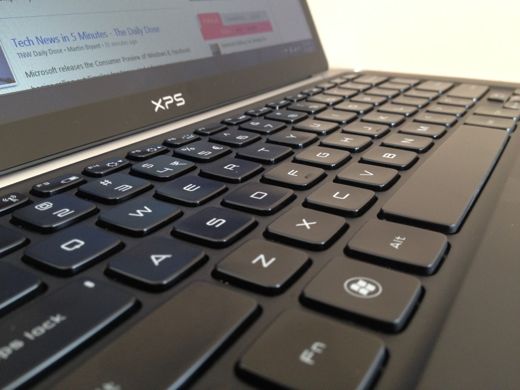 It’s been a fun few days for me, as I’ve gotten to play with the Dell XPS 13, an Ultrabook that I initially described as being “a defining piece of hardware” for the segment. So now that I’ve had a few more days rather than hours with the device, it’s time to get down and dirty with the full review of Dell’s first foray into the Ultrabook world.

I’m leaving comparisons to Apple’s MacBook Air out of this review. Why? Simply because the vast majority of consumers won’t see them as a competitor. If they like OS X, they’ll buy an Air. Windows users will want an Ultrabook. Yes, you can run Windows on the Air, but most users won’t. They will buy the computer and use it as it comes from the manufacturer.

That said, it’s hard to look at the XPS 13 and think of anything but the Air. Nearly everything about the device, in its closed state, looks similar. Open it up, however, and you’re in a different world. So here’s the good, bad, ugly and everything in between when it comes to Dell’s XPS 13.

Dell managed to pack a ridiculous set of specs into the 13. My demo unit came equipped with an Intel Core i7 processor, 4 GB of RAM and a 256 GB SSD. Because of this, yes, it positively flies through most normal tasks. Multiple windows, huge spreadsheets and video all running concurrently aren’t really a concern for the XPS 13. That is to say, if you’re buying this as a business user, chances are that it has more than enough guts to get you through the work that you need to do.

Dell’s done some trickery with the 13-inch screen, packing it edge-to-edge in order to force the entire device into a form factor that more closely resembles an 11-inch model. Fortunately the keyboard hasn’t suffered, and long typing sessions have been a breeze. The keyboard is very responsive, to the point that I’d call it one of the better keyboards I’ve ever used. It’s simply a joy to type on. Dell also chose to backlight the keyboard, which is a nice touch.

Speaking of nice touches, let’s talk literally. The XPS 13 just…feels nice. The aluminum lid and carbon fiber base keep the device feeling incredibly rigid. Even with it open, resting on a single leg and typing, there’s no noticeable flex. You really have to try hard to get the device to give way. The wrist rest areas of the 13 have a soft, velvet-like feel to them. The aluminum edge of the 13 is rolled just slightly, making it infinitely more comfortable to type on than my accidental-suicide-inducing MacBook Pro and its sharp edges.  The only area where I have a gripe on the feel of the device is in the trackpad, but more on that later.

I was pleasantly surprised to see that Dell didn’t load up the XPS with crapware. There are a few added pieces of the branded software, but they’re ones you’d likely want to use. You’ll see McAfee virus protection, a data backup service and some audio settings. Gone are the loads of free offers for AOL, downloads at eMusic and the rest of the usual offenders.

The display, a 1366 x 768 model, shows colors that are very true and easily bright enough in almost all areas of normal use. Unfortunately there is no matte option, and I can’t wait until more manufacturers start realizing that matte is the way forward. Glossy screens are only pretty in a dark room.

Dell’s trackpad is admirable, if not great. The included software gives you a couple of interesting gesture options, such as a 4-finger swipe down to show the desktop. The same swipe, but going up, takes you to an alt-tab window so that you can choose the program you’d like to use. It’s a play toward making Windows 7 act a bit nicer on small displays, and it works pretty well.

My niggles with the XPS 13 are just that – niggles. They’re minor, for the most part, because Dell really has done an incredible job with the device. But, they’re worth mentioning in the interest of a full review, so here we go.

Getting the lid of the 13 open is a pain. There isn’t a good place to get leverage to pull it open, and that’s compounded by the fact that the hinge is quite firm.

Only having 2 USB ports is somewhat limiting, even if it’s standard for the class. But Dell’s decision to make only one of the ports be compatible with USB 3.0 is confusing to me, in all aspects save for cost-saving.

The battery life is good, but not great. I have regularly gotten 5 hours of life out of the device, with multiple tabs open in Chrome, while running an Adobe Air application and watching the occasional video. That’s not best-of-class, but it’s good. It could be better, though, and it’s far below Dell’s claim of nearly 9 hours.

The trackpad is a sore spot, as well as being good. Yes, it works well and the gestures are useful. I also like that you can click anywhere on it, as it’s a single piece. But a 2-finger click to right-click doesn’t always work. I also question Dell’s choice of texture, as it makes the pad feel almost gritty, rather than tactile.

Pricing for the 13 is in line with what you’ll see from other makers in the segment. Unfortunately, that doesn’t mean that it’s good. The model I was sent to review will top $1,500 after tax. You can get that price down to the $1,000 range, but you’ll go from an i7 to an i5 processor, and give up half the hard disk space. A midrange option keeps the i5, while going up to a 256 GB SSD, and is priced at $1,300. Yes, those are some steep prices, and that’s going to be a point of contention for buyers.

Dell’s fit and finish on the XPS 13 is a welcome change. The company has done a rather fantastic job in creating a device that feels as good as it looks, and vice versa. That’s been a tradeoff among many manufacturers, Dell included, in the past.

Intel’s Quick Resume tech is a nice feature, making the 13’s resume function nearly instant. The SSD is quick and capable, and 4 GB of RAM makes Windows 7 feel surprisingly fast, a testament perhaps to the speed of the Core i7 processor.

After having had the XPS 13 for a week, it’s quickly become my go-to machine any time that I walk out the door. While that might not be as surprising if I were a Windows user on a daily basis, I’m an OS X fan so it’s perhaps more notable that I feel at home with the XPS and enjoy the convenience of it enough to forego my beloved MacBook Pro.

Dell’s initial foray into the world of Ultrabooks is a quick, capable offering that I’d readily recommend to anyone in the market for a new laptop. No, it’s not the $500 bargain-basement deal that we’re used to seeing from Windows machines, but perhaps that’s exactly the point.

I’ve long argued that Microsoft should manufacture its own premium line of hardware. With offerings like this, however, it doesn’t have to. There are finally Windows machines that you’ll be proud to carry and own, and Dell’s XPS 13 is absolutely a leader in this movement. It’s the first laptop, in a very long time, that I’ll be sad to send back.

Read next: Snackr for iOS saves time by reading your news out loud to you