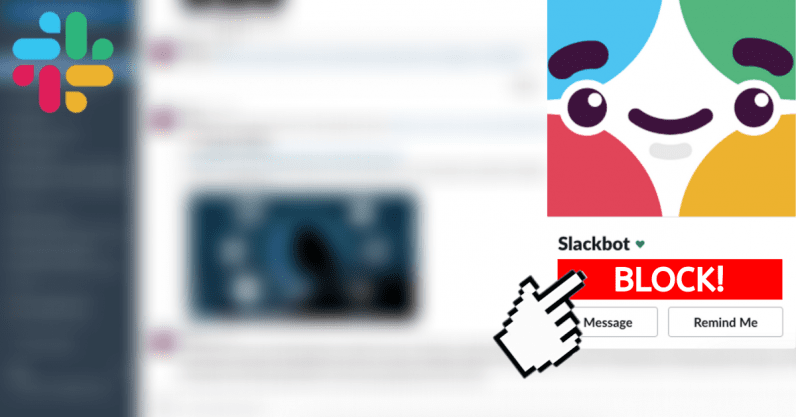 Slack, the group messaging tool has undoubtedly revolutionized the workplace, defining itself as a collaborative tool that encourages openness within teams regardless of the company size. It’s now easier than ever to stay in touch with colleagues, whether you want to or not.

Earlier this year, Caroline Sinders, an internet researcher, received a message from a friend asking whether it was possible to block someone on Slack. She had been sent multiple “creepy” messages from a co-worker who had also made her feel uncomfortable offline in the office — and this wasn’t the first time Sinders had been asked this.

There is currently no way to mute, hide, or block users on Slack. In a Quartz article written by Sinders in June titled “No one is talking about the biggest problem with Slack,” she argued everyone should have the ability to mute, block, and generally augment their experiences online because it “creates safety.” And this isn’t the first time the issue has been raised: back in 2017, Slack replied to a thread requesting these features: “The ability to mute another user wouldn’t be a good fit for work teams.”

We feel you, but the ability to mute another user wouldn’t be a good fit for work teams . Again, maybe an admin might be able to help?

On various social media sites, the mute feature anonymously prevents messages from showing up, which functions well since contacts on sites such as Facebook and Instagram are generally friends or family. However, Slack is a paid workplace tool that enables communication amongst various time zones and departments, and it can be argued if users are muted or blocked on the platform, it could affect the promised efficiency of the tool.

Last week, Sinders took matters into her own hands and started a petition calling on Slack to introduce a user blocking option claiming it “doesn’t change a workplace’s policy — it just helps protect victims.” So far, the petition has gathered 378 out of the 400 requested signatures.

I started a petition to bring the block button to Slack. Why? because a friend, and other people, have faced workplace harassment and have had no way to stop that harassment when it spills over to @SlackHQ. Slack, it’s time to add a block button. https://t.co/2SW46ph0lo

On most social networking sites, it’s fairly simple to block users and file complaint reports. Despite Slack not being an official social media site, it can be used in non-work settings, such as conferences where attendees can communicate with one another. As such, there’s a need to recognize the various ways in which Slack can be used – and unfortunately, misused – by people, and so it could potentially benefit from adding anti-harassment features like a mute button.

While Slack is technically just a workplace tool, it’s facing the same issues that major social networking sites like Twitter and Facebook have, in that it seems to take no responsibility for harassment that takes place on the platform. Slack’s “Acceptable Use Policy” defines what is and isn’t allowed, with no mention of harassment or unwelcome, inappropriate sexual comments.

Sinders acknowledges that claims like this should be raised within the workplace, but argues that some of the responsibility falls onto the messaging tool to protect its users.

“There’s been a little bit of pushback to the petition generally from a lot of white men, which seems to be that people should report harassment to HR,” Sinders told TNW. “That would make sense, if you believe HR works. But sometimes it takes HR a while to investigate and sometimes HR is just incompetent. Also, HR — especially with harassment cases — doesn’t work for all people.”

Online harassment can happen to anyone, but with social and chat apps, it tends to disproportionately affect marginalized groups and women. As mentioned, many argue Sinders’ friend should’ve gone straight to HR about the messages she was receiving on Slack — but how can we expect systems and institutions that are already stacked against marginalized groups to solve the problem?

The proposal to add a block function definitely isn’t a final solution. As Slack is a work tool, having to block certain employees from interaction can only be damaging to productivity and your presence in the online workplace. Being able to block people is a quick fix, but one that doesn’t address the root issue, and also seems to only disadvantage the recipient.

If added, it will also be important to look at how Slack’s blocking features affects records of harassment — it can’t be something that erases all previous interactions, or else there will be little proof to show if and when the harassment case is escalated.

An investigation by The Financial Times last year explored how workplace technology is fueling a new wave of sexual harassment. In particular, it outlined how Slack, and other company messaging tools like Facebook’s Workplace, ask employees of companies to provide personal details about themselves including their mobile number, location, home address, and social media links. This information is visible to anyone in their shared Slack workspace channels and can be used in more sinister ways than just “getting to know” your co-workers.

Because of this, Sinders argued: “People should have the agency and ability to augment their experiences, even if it means missing messages. But, if anything, if someone needs to block someone else, they probably aren’t missing important messages from the person they blocked — they’re blocking a message detrimental to them.”

While the responsibility ultimately falls on HR departments to resolve any harassment claims raised at work, Slack has created new, and easier ways for perpetrators to discreetly harass coworkers on work time. While a feature that allows people to block or mute others doesn’t eradicate the issue of sexual harassment at work, it does provide a short-term solution and escape for the victim.

Read next: CHEAP: Every day is bass day with 35% off the Beats Pill+ portable bluetooth speaker