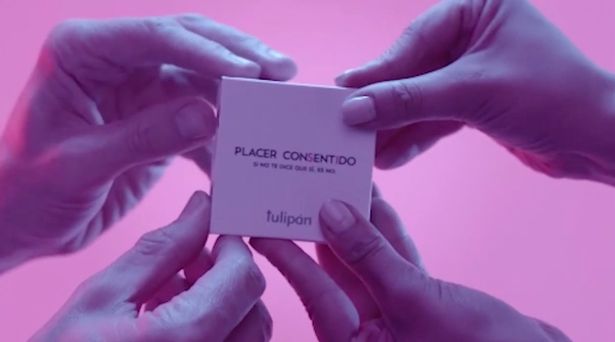 94 percent of women who are raped experience symptoms of post-traumatic stress disorder. One in three will contemplate suicide. And while a condom isn’t going to stop rape, it’s a damn good place to start.

Tulipán, an Argentine sex toy retailer, has created the world’s first “consent condom,” a condom encased in packaging requiring four hands to open. The unique design requires two parties to simultaneously press special points on the side of the packet to access its contents.

“Tulipán has always spoken of safe pleasure but for this campaign we understood that we had to talk about the most important thing in every sexual relationship — pleasure is possible only if you both give your consent,” said Joaquin Campins of BBDO, the ad agency responsible for marketing the condom. “If it’s not a yes, it’s a no,” he adds.

The company so far has been handing out the limited-edition condoms at bars and events in Buenos Aires. So far, they’ve been free, and met with praise from those who’ve received them. Tulipán says it plans to sell the condoms at a later date.

The consent pack isn’t alone in the condom tech space, either. Last year we reported on a self-lubricating condom that can withstand more than 1,000 thrusts.

In 2016 we helped introduce the world to Lelo Hex, a condom with a honeycomb shape that’s designed to continue providing some protection when broken. Granted, there’s also an argument to be made that continuing to use a condom you can’t tell is broken — typical condoms tend to shred, when broken; you can’t mistake it for a functional contraceptive.

Perhaps the coolest condom tech in recent years came from a group of teens at the Isaac Newton Academy in London. Daanyaal Ali, Chirag Shah, and Muaz Nawaz took home an award at the TeenTech Awards for their invention, S.T.EYE — a play on STI — a condom that changes colors when introduced with STI pathogens found in chlamydia, herpes, HPV, and syphilis.

Read next: Why the world is unhappy with India's anti-satellite missile test