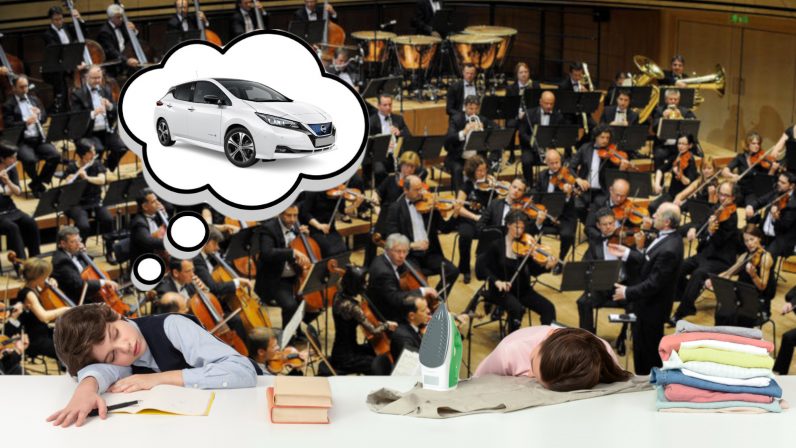 With virtually no engine noise, electric vehicles are smooth and nearly silent. But is that a good thing? Some parents, and their children, would disagree.

According to research from Nissan, more than half of all the UK-based parents surveyed resort to hopping in their car with their restless children to help them get to sleep: A practice Nissan charmingly refers to as a “dream drive.” And Nissan is close to replicating this in otherwise-quiet electric vehicles.

With no internal combustion engine to produce those comforting vibrations and aural frequencies that can send a child to sleep in just minutes, EV drivers are at a bit of a loss.

“One of the biggest worries new parents have is how to get their baby to sleep. Parents soon realize that taking a drive in the car or ‘dream driving’ is a great way to get a baby or young child to nod off,” parenting expert Elizabeth O’Shea said.

Thankfully Nissan is on the case, and has dreamt up what it says is the world’s first “zero-emission lullaby” for electric vehicles.

In collaboration with sound designer and sleep coach Tom Middleton, Nissan has developed a soundscape that replicates the reassuring hum of internal combustion engines to, in theory, induce sleep in youngsters.

It’s more than just a series of sound effects. Nissan has released its soundscape as a five-part album. It includes contributions from great artists such as Reversing Tone and Indicator Click. It even features solos from the likes of Proximity Sensor Sounds and Rear Windscreen Wiper.

Seriously though, the environmental impact of dream driving shouldn’t be overlooked.

Nissan‘s research found that parents spend an average of 20-25 minutes when “dream driving,” usually covering around 8 km (roughly 5 miles) each time. In other words, this equates to around 70 kg of CO2 per family per year.

To play the “Dream Drive lullaby,” drivers can connect their phone to their car and stream the album directly to the vehicle‘s stereo. It’s on a host of platforms, so you can play it anywhere you please.

You’re curious, aren’t you? Well, you can listen to it for yourself here. Just don’t fall asleep at your desk.

Read next: Every phone should have the Galaxy S20's bluetooth sharing feature