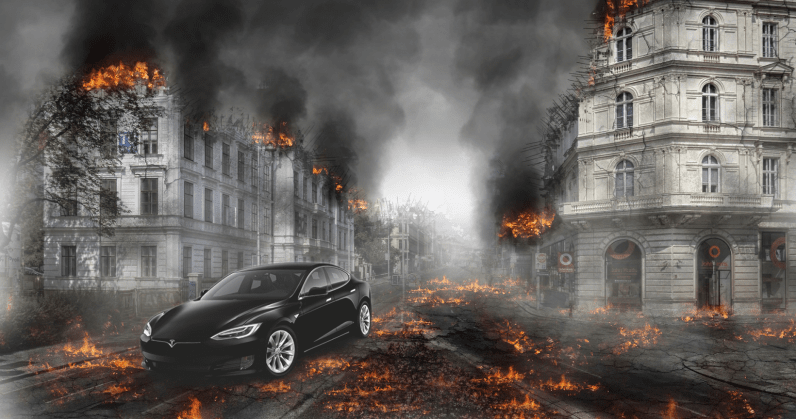 A car crashes at 70 miles-per-hour. Upon impact electrical components get jarred loose, creating a spark that comes into contact with a fuel leak from the gas tank. The vehicle erupts into flames.

Clearly, this is a worst-case-scenario. It’s also a rare occurrence. According to the National Fire Protection Association, only about three percent of auto fires are caused by a collision. And only 0.09 percent of collisions result in a fire.

For an electric vehicle (EV), the risks are a bit different. There’s still a chance of fire, of course. But the biggest concern isn’t that of fire, but a powerful electric shock caused by the vehicle’s sizable batteries.

To combat this, all EVs have a failsafe process that cuts power to the electrical system in the event of an accident. In a fraction of a second, the vehicle sends a signal to an onboard computer, and stops the spread of power throughout its electrical system. But damaged wiring, caused by the crash itself, could stop the signal, thus thwarting the vehicle’s ability to cut the power — thus making it unsafe for rescuers and those trapped inside.

Bosch recently developed a small device that triggers a series of small, controlled explosion in an effort to stop power from traveling from the battery to the car’s electrical systems. The system ensures that no matter what happens, there’s always a physical wedge between the battery and the electrical components, thus removing the risk of electrical shock.

And while explosions may sound like an extreme solution, let’s not forget that this is exactly the way that airbags work. A controlled explosion deploys the bag, filling it with air, in the split second after the accident and, hopefully, before your head or neck make contact with the vehicle itself.

Then again, there’s always the risk of physical damage to the battery, which could lead to a catastrophic explosion. Bosch’s solution doesn’t solve all of the potential dangers of EVs, but it would certainly minimize the potential for electric shock in a rather specific use case.

Explosions that save lives on Bosch

Read next: Where to watch Microsoft reveal its new Surface devices