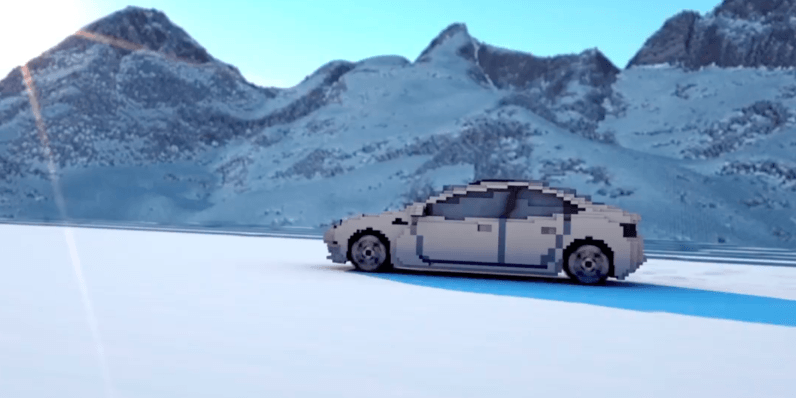 A group has recreated the Tesla Model 3 entirely in digital block form, as part of a pitch for environmental education within Minecraft.

“Tesla Meets Minecraft” is a minute-long video where the blocky Tesla drives through blocky environments — very similar to stock car commercials. It’s the product of Brandon Relph and Florian Funke, the cofounders of goCreative, via their new Minecraft studio, block. The two are admirers of Tesla’s Elon Musk, and believe his company can help build a sustainable future.

That said, it’s Minecraft that’s the real star here. The company created this video to promote a program it wishes to build within the Education Edition of the game. Relph thinks Minecraft is a powerful tool for teaching environmental consciousness:

I obviously can’t take every child on a trip to see the ice-caps melting although I can for sure show them that in Minecraft. It helps them visualise and empathise with the world around them and I think that will be vital in the world going forward.

Their admiration for Musk’s efforts notwithstanding, I can’t help but think a Tesla will be out of place in an educational program about the polar ice caps — especially since it looks like the car is driving across them in the video.

The company has experimented with other green concepts in Minecraft: one of their largest creations is Peninsula Park, a “futuristic and sustainable park” which looks like Disney World if it were designed by Apple. The new company also makes Minecraft maps for edutainment purposes and general gaming, which can be found on its site.

According to Relph, the company tentatively hopes to develop the full program featuring the Tesla this summer.