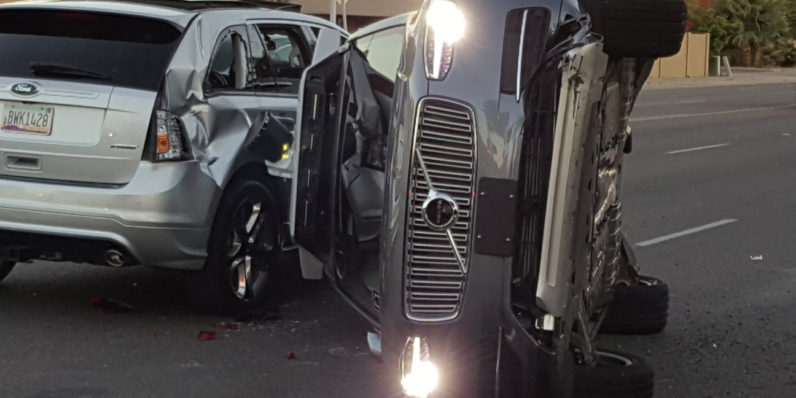 Uber is putting its self-driving car tech tests on hold after one of its vehicles was involved in an accident in Tempe, Arizona over the weekend. The incident was spotted and photographed by Fresco News user Mark Beach.

One of Uber’s self-driving Volvo SUVs was found on its side after it collided with another vehicle while in autonomous mode. According to Tempe police who spoke to Bloomberg, the company’s car wasn’t at fault; a second car failed to yield for the Uber and caused it to flip over.

The company says that there were no serious injuries and that the SUV didn’t have any backseat passengers.

While the police report indicates that Uber’s vehicle may not have been at fault, it’s worth noting that it could well have had a civilian passenger in the back, as the company’s trials allow some users to ride in its self-driving cabs when they hail an UberX. And as TechCrunch notes, the fact that the vehicle had tipped over on its side could mean that it was traveling at an unnecessarily high speed.

Uber first began testing its self-driving cabs in Pittsburgh in August 2016, and launched trials in Tempe in February after it was invited to do so by Arizona Governor Doug Ducey.

One of the company’s autonomous vehicles previously ran a red light; Uber claimed this was due to human error, but that has since been refuted by The New York Times.

The company is also being sued by Waymo, a self-driving tech firm owned by Google’s parent company Alphabet, for allegedly stealing a key component of its proprietary autonomous navigation technology.

It isn’t yet clear how soon Uber will be able to bounce back from this one. A spokesperson said it’s looking into the incident at present; between that and the Waymo lawsuit, it may well be a while before we see another Uber test vehicle on the streets.

Update: Reuters reports that, after the incident on Friday, Uber has resumed its self-driving car tests on Monday.