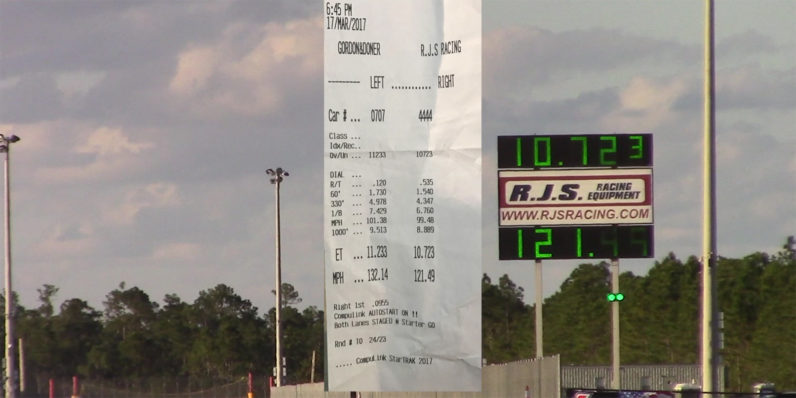 When I was a kid, a four-door car was considered a grocery-getter. Now, they’re running 10-second quarter-miles.

Tesla’s Model S P100D is a fast car. It’s fast enough, in fact, to have run a 10.726-second quarter mile, the fastest of any stock production electric car — or any four-door sedan for that matter.

Well, it was the fastest. A Drag Times video shows a P100D running a 10.723 recently, and setting a new record.

The video shows two P100D’s, actually: one slightly heavier than the other due to factory-installed options, like a sunroof. All told, these options made one of the two cars about 300 pounds heavier. The heavier of the two still ran a blisteringly-fast 10.875-second quarter-mile, just tenths of a second off the record.

The lighter car, though, managed to set a new one.

Aside from shedding weight, this P100D (both of them, actually) also ran Tesla’s newest firmware update, with the Ludicrous+ upgrade.

If you want to get super technical, Motor Trend managed to squeeze a 10.5-second quarter mile run out of its test vehicle, only that one featured tires that weren’t widely available at the time. So in this case, we’re going to add an asterisk to the publication’s mark, although it’s still worth a mention.

The idea that a car can break it’s own speed record with just a software update is still kind of mind-blowing. It also shows the company may still be able to eek a few additional tenths of a second off its own record, down the line.

Update: According to Electrek, another P100D broke the record again on the same day with a time of 10.638 seconds.

Read next: Company offers $10k to employees willing to ditch the Bay Area