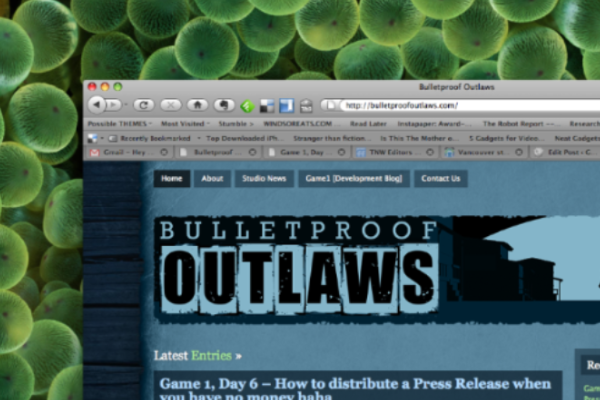 Ever wondered what it takes to create a video game studio? A Canadian-based startup called Bulletproof Outlaws intends to show you.

Bulletproof Outlaws is documenting every step of the arduous game studio creation process, and it’s providing daily behind-the-scenes information on its site. It doesn’t really go into the technical side of developing games but it’s recording the business side of the undertaking; strategies, outsourcing and marketing.

How do you distribute a press release when you have no money? Day 6 sheds some light on how it’s done, and it lists a series of free press release distribution services like PRLog and WidePR. Measuring stats, financial projections, setting goals and creating flowcharts are just a few of the topics that have been covered so far.

The Calgary startup aims to encourage developers to fulfill their aspirations of building their own studios, a dream that Bulletproof Outlaws says a lot of developers have but they’re too scared of the risks. And, by observing someone else’s approach, successes and failures, it may just give devs the courage to do it.

Bulletproof Outlaws says it believes that the new era of game development has arrived and has come back full circle to its “one programmer in the basement roots”. And in the mobile game space, this has been proved to be true. Jeff Hangartner, the founder of Bulletproof Outlaws says “The nicest part about being a small financially independent studio is that I can try outside-the-box ideas…I mean, I’m typing this from a mall food court, my “office” for the day”, he told us via email.

Hangarner tells us, he would have killed for the information that kids have access to today and by extending all of his knowledge to others, it might inspire more developers to follow their dreams.

Read next: Still waiting for Firefox 4? Now slated for a February release.