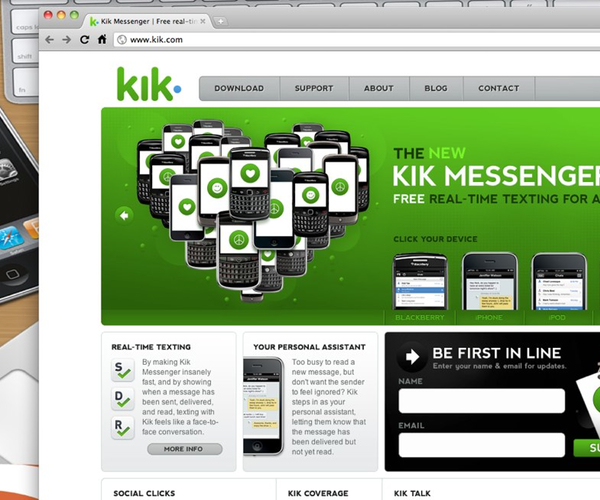 A week or so ago (via Techvibes) Waterloo-based Kik hit my radar. Kik is a messaging app like BlackBerry Messenger (BBM) where you send short messages to your contacts. It’s like SMS meets chat (for those of you who haven’t used BBM). Like BBM you can tell when someone has received and read a message (no more “Oh, I didn’t get it…” excuses). I looked at the app and its relaunch in late October, and one key question came to mind: Could I get my friends to sign up with yet another messaging service?

Today Techvibes and StartupNorth are reporting on Kik’s latest press release about the tremendous number or downloads in recent weeks and 150,000 new users added in one day (CNW). While I think it’s great that Kik appears to be having gangbusters success, so much so that they need to update the messaging servers:

Messages are getting a bit backed up – there are currently OVER 1,500,000 msgs/hr going through #kik ! Upgrades being deployed. Stand by. (Source: Twitter)

I’m still left wondering who is using the app. No, I’m not poo-pooing their success, it’s just that in the week + that I’ve had the app, I’ve only received one notification that someone I might know is using Kik. I’m connected to thousands of people, so it would stand to reason that even in startup mode at least a few of my tech adopter friends would have picked up on it. The premise is good, near real-time messaging across pretty much all mobile platforms. the interface looks nice, certainly easy to use. I think, because I haven’t found anyone to use it with yet.

And this is the rub.

Could I get my wife to sign up for Kik? Probably not. Another service? What’s wrong with SMS? Or even email? While the app certainly has potential, exclaiming that the app is having “viral growth” is stretching it I think. I think StartupNorth has a smart, cautious optimism in the review. No doubt there is a use case. No doubt it could be handy. However I just don’t see that Kik solves the messaging glut problem that we already have (email, Twitter, Facebook, SMS, and on) in any new or real way. I’m glad that Kik has had a lot of downloads, maybe Google will notice them, scoop them up, and we’ll get some interesting features in GTalk or Google Voice.

Read next: Google's Schmidt: Chinese Censorship of the Internet will Fail