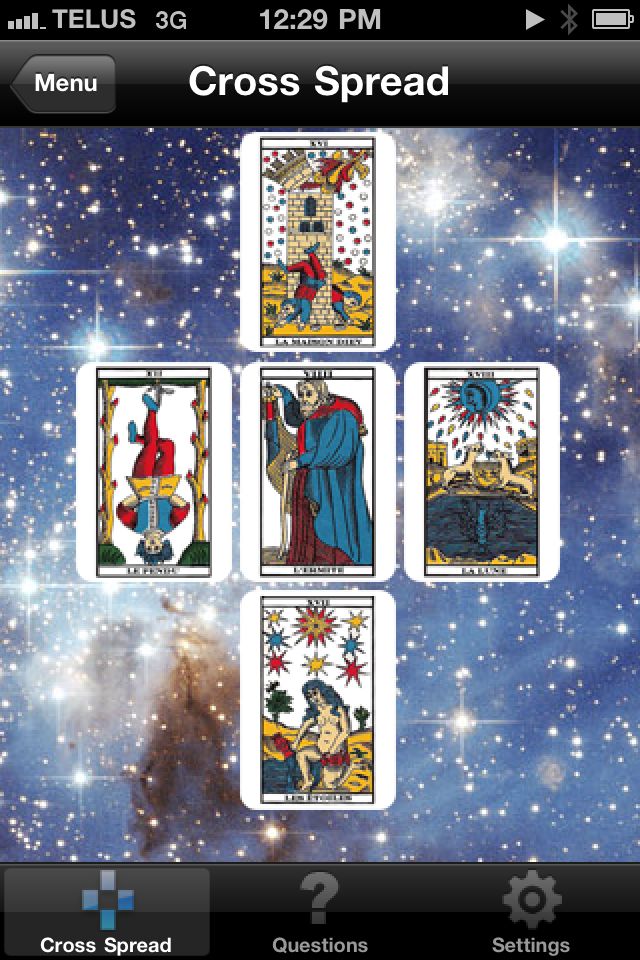 Ever had your Tarot cards read? Come on, admit it, you probably have. It’s okay, it’s not like it’s something new or out of the blue. Now if you’d like to have your cards read or see what the future holds for you but don’t want to have to find someone to read your cards, thanks to Montreal-based TechniConseils you can do it right from your iPhone.

Yeah, I know what you’re thinking. Fine, but the graphics on on the app are gorgeous. There is nice game play with choosing your four cards and the answer to your question is in the nice, basic style that could answer, or not, your question.

The app is in English and French (yes the iTunes link is in French, but that’s okay, if your iOS device is in English you’ll see English).

The app is priced at $1.99, but I have codes! Yep we received 8 codes for the apps and they are up for grabs to the first 8 commenters!

Now if you think this app is cool, Jonathan from TechniConseils told me in his email that he has iPad versions of some books in the works as well as a GPS app for interactive storytelling called “Under The City” to tie in with a film about the underground rivers that many of our cities are built on (there is an old river called Brewery Creek that has been diverted underground right near my house). And to top it off Jonathan is the admin of the Montreal Mac Users Group. Busy guy, but I think we’ll be seeing more apps from him in short order.

So, leave a comment, get a code, and see what’s in the cards for you.

Update: We have our winners! But if you like a fun little game, $2 isn’t bad.