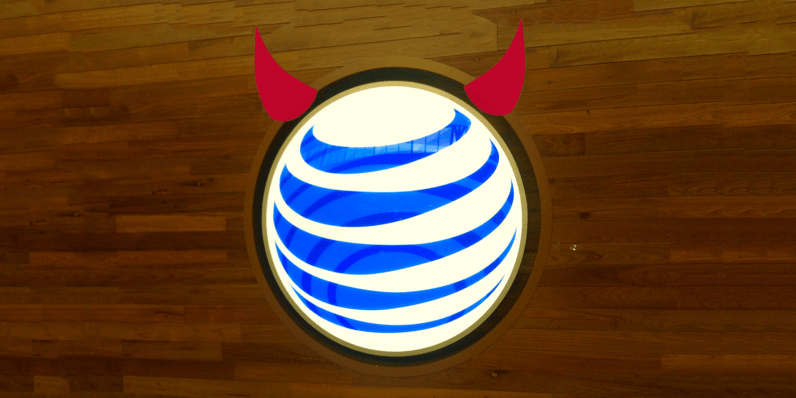 Just before the deadline to submit comments to the FCC regarding net neutrality, AT&T managed to slip a statement in. After reading it, we’re certain it was one AT&T was hoping you didn’t notice.

In it, Joan Marsh, Executive VP of Regulatory & State External Affairs, attempted to woo a populace largely in favor of net neutrality. And as you’d might expect, AT&T used a mixture of half-truths and outright falsehoods to do the convincing.

Nothing in the history of broadband remotely suggests that Title II regulation is necessary to ensure an open internet. While Title II proponents argue otherwise by pointing to a tiny number of alleged “incidents” during the past decade…

From 2007 to 2009, AT&T forced Apple to block Skype and other competing VOIP services. In an effort to prevent users from using so-called “over-the-top” voice services, AT&T enacted strict policies preventing users from making calls on Skype when out of range of a Wi-Fi network. And at the time, you couldn’t just pack up and head to Verizon; AT&T had exclusive rights to sell the early iPhone models.

Google Voice experienced similar issues after its launch in 2009.

From 2011 to 2013, AT&T, Sprint, T-Mobile, and Verizon blocked mobile wallets competing with Isis (which was later renamed to Softcard, for obvious reasons). Google Wallet, and others were essentially blocked in favor of a wallet technology each of the “big four” had a stake in developing.

In 2012, AT&T disabled FaceTime unless customers subscribed to a more expensive plan.

AT&T actually had the dubious honor of being the first telecom to face a fine in the FCC’s first-ever net neutrality case. The telecom giant faced fines of up to $100 million for limiting “unlimited” plans. Under the “Maximum Bit Rate” policy, AT&T reduced data speeds for customers paying for unlimited data, which violates the “transparency” requirement of net neutrality rules.

I could go on, but let’s just fast forward to the last year. In January, the FCC took issue with AT&T’s preferential treatment of DirecTV Now, a service AT&T owns. According to the complaint, AT&T created a disadvantage for other providers by exempting data used by its own service from monthly allowances.

If a handful of complaints isn’t enough, there are dozens more. A quick Google search should fill your day with a mountain of net neutrality issues. And bear in mind, we’re just discussing AT&T in these complaints; I could go on for days about the shady shit Verizon, Sprint and others have pulled over the last decade.

Other practices cited by the proponents of Title II, such as zero-rating, are unambiguously beneficial to consumers. Thus, far from demonstrating a need for Title II, the only conclusion that can be drawn from two decades of experience is that a light touch approach is more than sufficient to ensure an open internet. Indeed, the internet has flourished during this time in part because of the absence of Title II for all but the past two years.

The internet has certainly flourished, but not without regulation. AT&T, Verizon, Sprint, and T-Mobile have all faced the proposition of hefty fines for uncompetitive business practices, zero-rating, and flat-out deception of customers.

And the proposition that zero-rating is somehow beneficial? Please.

Offering a discount to consumers using an AT&T-owned property, like DirecTV Now, over a competing property, like Sling, isn’t benefitting anyone but AT&T. It’s limiting competition by backing a specific horse, shooting it with steroids, and giving it a 300 meter head start. But it’s not a violation, the telecom companies will say; consumers still have the right to use Sling. And they do. But if you’re struggling to stay under your data cap each month, you’re not going to chance using the service that burns through it as opposed to the one that’s included — and exempted from your overall data allotment.

“Unambiguous” is also an interesting word choice. Telecoms, arguably, offer some of the most ambiguous language of any contract you’ll ever sign. In my experience, people who work at retail locations for telecoms like my provider, T-Mobile, often don’t understand the language of the contract and have to bring in reinforcements. This isn’t an accident.

In fact, they don’t even address mobile broadband competition when arguing that mobile services, as well as fixed, should be subject to Title II. They further rely on the analytically unsupported and economically incoherent “gatekeeper” theory from the FCC’s 2015 order, according to which every ISP, no matter how small, has monopoly power.

Marsh, here, argues that broadband companies are seen as monopolies no matter how small the ISP. And she’s right, even small ISPs are often deemed monopolies, but she ignores one key point: it’s because they are. In certain regions of the United States, consumers don’t have the choice to just switch ISPs if they’re unhappy with speeds or services — no competitors exist.

And the idea that these companies aren’t monopolies because they could just rely on a tethered mobile device is, well, insane. Remember data caps?

I’m going to stop, because I could really pick apart Marsh’s arguments for days. Like most arguments against Title II classification, the talking points are heavy on rhetoric while ignoring both past proof that deregulation is a bad idea, and real-world examples of why net neutrality is needed.

But before I go, I want to offer a glimpse at what an unregulated internet looks like.

Until just over a year ago, I spent the previous two years in Mexico — a country with a growing middle class and a boom in ISP and mobile offerings. AT&T has a heavy presence there, as you’d expect from a worldwide leader. Developing markets mean there’s a lot of money to be made. But still, Mexico’s internet infrastructure is in its early days, and regulations are sparse — and the few that do exist are rarely enforced.

If you’re wondering what a future without Title II looks like in the United States, look no further than AT&T’s mobile offerings in a country where these regulations don’t yet exist.

You’ll see the problem rather quickly. Facebook, Messenger, Twitter, and Whatsapp are excluded from your data allotment — three of which are Facebook-owned properties. And if you want to use Instagram (another Facebook-owned property) without using your exceedingly small data allotment? No problem; just bump that plan up to the 549 plan, which runs $549 pesos (about $30 USD). The same goes for Snapchat.

But what if you wanted to use Skype, Telegram, or WeChat? Maybe it’s a good time to get your friends to switch to Messenger, just in case.

Read next: The expansion of the freelance economy