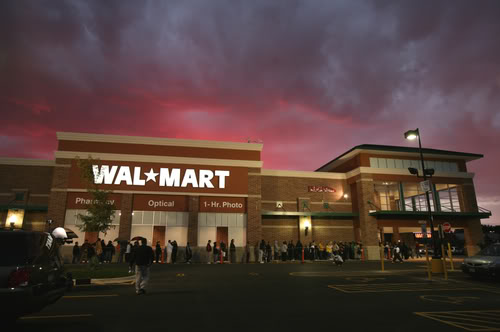 Walmart recently unveiled plans to begin using virtual reality headsets to train new employees. According to a Business Insider report, the VR system is designed to help entry-level employees (and those entering new positions) prepare for specific situations — like a holiday rush — that traditional training can’t simulate. An expected 140,000 employees will use the new VR system this year alone.

Is virtual reality the best way to train retail employees?

The VR training tech Walmart is implementing will be used at their Walmart Academies. These training centers across the United States allow employees to learn in a classroom environment. The company opened it’s 100th training academy in April 2017 and plans on having 200 by the end of this summer – the kind of pace only a giant like Walmart could keep up.

The applications for the tech seem to be endless, but do Walmart employees need an entire virtual Walmart environment to simulate what it’s going to be like to perform their duties?

Walmart Vice President of Operations Tom Ward states that the technology will be used to simulate difficult work periods employees will encounter. This training should help employees cope with periods that aren’t neccesarily the norm, but will require competency to manage.

Many Walmart employees still aren’t making $10 per hour, but they’ll be trained at brand new Walmart academies using the newest VR training technology. While it looks like the entire Walmart strategy continues to be one in which the employees are replaceable parts in a system designed to maximize profits – there is hope. The VR investment is, at least in the altruistic sense, an investment in people.

In fact – the Washington Post reports that the company will be competing with the likes of Amazon by sending packages out for delivery with employees on their way home from work. Take that drones.

The next time you order something from Walmart it might be delivered by a VR trained cashier: one who lives in your neighborhood. Walmart spokesperson Ravi Jariwala told the Washington Post that “Walmart is uniquely qualified, uniquely positioned, to be able to offer this… 90 percent of Americans live within 10 miles of a Walmart store.”

If that sounds terrifying, keep in mind that Walmart workers are hard working individuals whose options are limited. The company didn’t move next door to 90-percent of Americans by looking out for the little guy.

There’s also the wage problems that plague Walmart employees. Some of the lowest-paid employees in the US are being trained in ways usually reserved for athletes and high skill jobs. Those same employees will then be offered the opportunity to drop off deliveries on their way home from work. The two ideas seem to be pushing in opposite directions — something Walmart is well versed in.

They’ll save money by having employees take on risk. When actor/comedian Tracy Morgan was involved in an accident with a Walmart delivery truck he recieved 90 million dollars (that Walmart was reimbursed for) from the company. What happens when a Walmart cashier who makes minimum wage gets into an accident delivering someone’s American flag bbq set? They’ll foot the insurance hike just like any other private citizen would.

Double-tapping it’s in-store employees extends the “bang for the buck” that Walmart gets by continuing to cut costs at the expense of the lowest earning employees in the company.

Walmart aims to streamline training to create efficient workers that are easily replaceable by others that can be up to speed in just two weeks. It’s almost as though there is no expense Walmart won’t go to in order to continue paying the lowest wages in the country.

Read next: Amazon and Audible get dramatic, offer enticing grants for playwrights