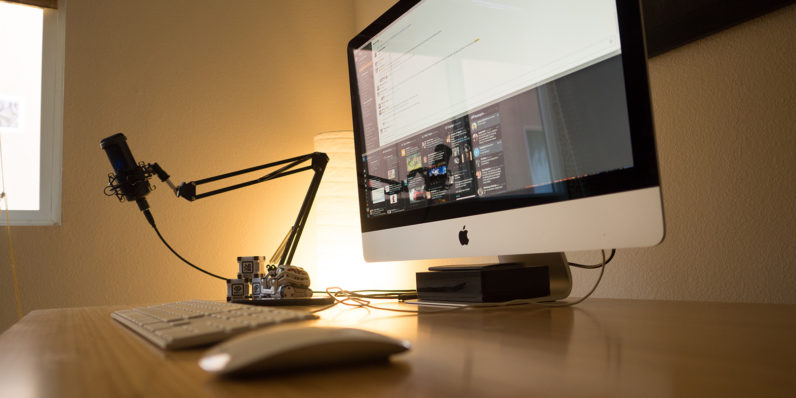 I’ve avoided standing desks my entire life. Sure, sitting is killing us, but after the initial hoopla wore off, researchers started poking holes in the idea that standing was any better than sitting. Since I had a nice desk already, I had little motivation to upgrade for a non-obvious benefit. And standing desks come with their own set of problems, like joint pain.

Standing is better than sitting, it’s hard to argue that. But you might be surprised at how little we know about the benefits of adjusting your work style.

You might have heard it burns more calories. It does, but studies show the effect is minimal. The average person burns a mere eight additional calories an hour standing as opposed to sitting. High-five, dieters, you’ve just found a way to burn off that mid-day stalk of celery.

Or, maybe you’re doing it for an overall sense of well-being.

Not sitting leads to decreased instances of obesity, diabetes, cardiovascular disease, cancer, and premature death. But if you look closely, few studies are concrete on the benefits of standing for preventing these problems. Most touting the benefits of a standing desk specifically use the words “not sitting.” And not sitting can mean a lot of things: doing squats at your desk, walking on a treadmill, or quitting your job to go hike the Appalachian Trail during office hours.

Researchers agree that standing desks are beneficial, except when they’re not.

The key, as we later found, was in moderation. A combination approach to sitting and standing is the answer. Even if you stand most of the day, a mere 20 minutes sitting every few hours could ease the symptoms of joint pain. Or, if you’re sitting all day, standing for 20 minutes every few hours could help with an achy lower back and shoulders. The best path is the one that works for you, but it essentially revolves around doing one until fatigue sets in and then switching to the other — and hopefully standing more than sitting.

And this brings us a whole new set of problems. There are currently three options that allow you to sit and stand during a given work day.

I was actually pretty excited when Autonomous approached me to try its new sit/stand desk combo, SmartDesk, as it checked a lot of boxes for me.

It’s electronic, so I could not only raise or lower the desk without much effort, but I also have the option to store up to four presets to raise or lower it with a single button press. It’s attractive; the bamboo top looks great, and the legs are mostly neutral. It’s minimalist, and some are really going to love it. I think it looks a little like a larger version of the desk I had in high school — only with a much nicer top. It’s not my ideal aesthetic, but it’s not an eyesore by any means.

And most importantly, it’s affordable starting at $299.

The bamboo top, by the way, is an upgrade. It’ll set you back an additional $100, but it’s sturdy, attractive, and a silky-smooth work surface. I’d highly recommend it. Autonomous offers additional upgrades as well: like the accessory kit and an AI solution.

There’s a certain novelty about talking to your desk that I just couldn’t pass up. The AI assistant, Taylor, can do most of the things your phone can do, but without requiring your phone. I can check my calendar, set reminders, place food orders, connect with fitness wearables to notify me of activity levels, and interface with smart lighting and thermostats. It’s cool, although it may be redundant for heavy users of voice interfaces on their mobile devices.

After assembling it — which was time-consuming, but easier than most Ikea furniture — I was immediately impressed by how sturdy everything was. The legs weigh a ton, so I guess I should have realized early on that there wouldn’t be any wobble, but after getting it together, I reveled in the fact that even living in earthquake central, my expensive electronics were probably safe on top of it.

As far as raising and lowering the desk, I’m struck by how quiet it is. It’s also an incredibly smooth endeavor both up and down. I can leave liquids on the desk without worrying about them spilling during the transition, which was one of my initial concerns.

Desk together, I started standing the next day. I aimed to start slow, and put in 15 minutes each hour while I attempted to re-learn how to work standing up. It didn’t go over all that well. I found myself standing while reading, but wanting to sit each time I had to type. It makes sense. Studies show fine motor control requires fewer moving parts; there’s a reason surgeons sit during complex surgeries. Typing isn’t akin to brain surgery, but at 100-plus words-per-minute, my fingers didn’t seem to cooperate as well when I moved.

Over time, this got better. I was able to type at closer-to-normal speeds, and now I don’t notice much at all when I’m standing. But it wasn’t smooth sailing, at least at first. After a few days I started to experience joint pain. My office is carpeted, and I typically work barefoot, which wasn’t enough cushioning as I came to understand.

This was remedied with an email to ErgoDriven, a company that makes mats for standing desks. After a few questions, about size and how I intended to use it, the company sent over this monstrosity, the Topo.

I’m thankful it did. The Topo mat was not only softer to stand on, but it provided varying angles to shift my feet around while standing. When planted flat-footed all day, it’s hard on your joints, and much less enjoyable than shifting around into different positions as one becomes uncomfortable. It’s pricy at $119 — it’s amazing, but still a padded mat, after all — but the accessory made the difference between an enjoyable experience, and abandoning the standing desk entirely.

After 30 days, and switching to the Topo mat, I’m now switching back and forth between standing and sitting all day. Some days are better than others, but generally once I start to notice fatigue in my legs (while standing) or lower back and shoulders (usually while sitting), I switch. It’s progress, as the first few weeks I had to set reminders because I often forget standing was an option.

The desk is amazing, and holding up well with heavy use. The glossy top is easy to clean, I love how sturdy the whole thing feels, and I’ve gotten over the look of the legs. I have my presets dialed in perfectly to raise or lower the desk to the perfect height, and aside from abandoning the AI box after I noticed I’d forget it existed and use Siri instead, the desk is everything I could have asked for.

If I had it to do over again, though, I would have selected the larger of the two tops. Turns out, I like space more than I would have first realized.

I’m also curious to try the ErgoStool, also by Autonomous, which seems like a cool mid-point that facilitates easier transitions between sitting and standing.

As for the experiment, I’m sold. I won’t be returning to the standard desk anytime soon.

Read next: Microsoft commits to major Windows 10 releases every 6 months