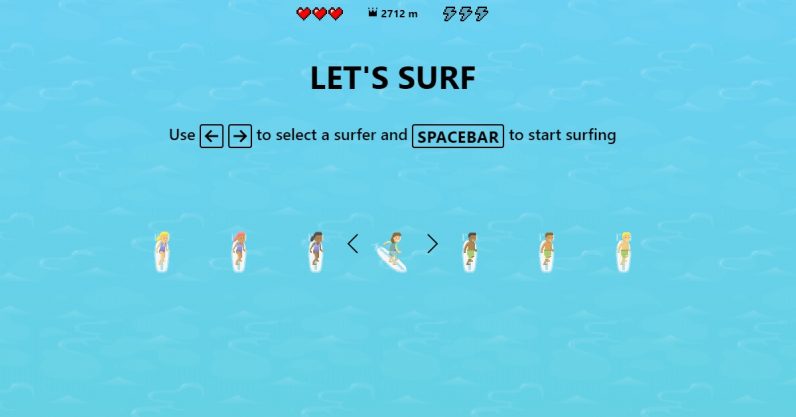 Microsoft is continually improving its browser, Edge. One of its latest updates is the permanent addition of what was formerly an easter egg: a surfing game that you can access offline. The game was originally part of an elaborate reveal of the new Edge logo, but now it’s available for everyday play.

Side note: at the moment, the game is only available in the Canary or Dev builds of Microsoft Edge, which you can download here. But it’ll eventually make its way to the main version of Edge, where anyone can play it.

[Read: How to play games on Nvidia GeForce Now]

To find the surfing game, enter “edge://surf” in the search bar of the Edge browser, and you’re off. If you have a controller connected to your PC via bluetooth, then you can play the game with it — and I won’t say you should, but I will say I got higher scores in all three modes with the controller than I did with my keyboard.

It’s actually quite a fun game. The most Ski-Free of the modes is “Let’s Surf,” where you surf the world’s filthiest ocean while trying to evade the tentacles of a purple sea monster. You have hearts and energy, and you’ll have to evade the obstacles for as long as you can.

You start the game in Let’s Surf mode, but you can change the modes by going to the settings menu in the top right corner. You can also use this menu to enable high visibility mode (which adds more clearly defined boxes around your surfer and the obstacles), and reduced speed mode.

The second mode is time trial, which is a race, as the name implies. This one was punishing, I don’t mind telling you. I haven’t pulled out that many hairs since I played Trials Rising. The third mode is “Zig Zag,” in which users have to navigate through as many gates as possible, using the game‘s diagonal movement to try and hit your marks. Neither mode have the same frenetic energy as Let’s Surf, but they’re still a fun diversion.

So now you know how to find the Edge Surf game, good luck against the sea monster!

Read next: A massive cache of stolen OnlyFans videos have been dumped online