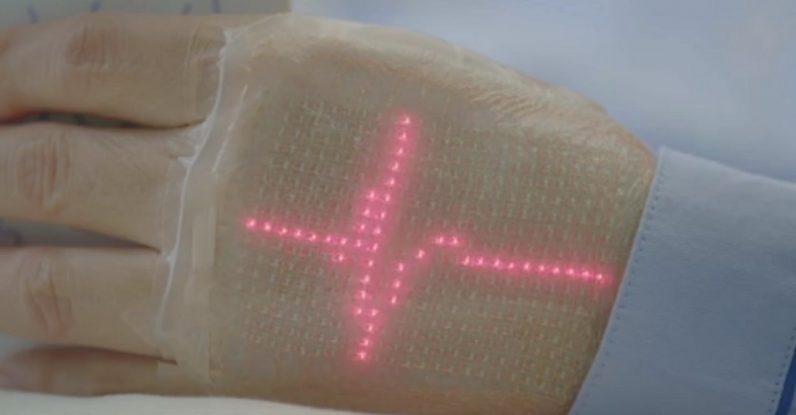 Researchers from the University of Tokyo announced last week a new advancement in wearable technology: A highly flexible electronic skin display that shows your health information, allowing you to monitor vitals at a glance.

Made from nanomesh, the display is flexible, breathable, and stretchable — it can stretch up to 45 percent of its original size. It contains a display of microLEDs which read out health information such as heart rate, temperature, or blood pressure. The information updates in real time, and the skin can be worn for up to a week.

Since it gives the biometric data to the user via a waveform readout, it eliminates the need for a phone or app to process the data. It can still be paired with a device or sent to cloud storage, or it can store the information locally.

The team, led by Professor Takao Someya, have worked on multiple kinds of e-skin sensors over the year. Last year, Someya co-authored a paper describing the device’s construction and how to make it breathable.

If nothing else, this brings up one step closer to the “bodyNET” that Stanford University researchers proposed last year — the full-body network of sensors and wearables that could potentially be the endgame for our human/tech interactions.

According to the university, the printing company which manufactures the skin hopes to have it ready for market in the next three years.

Read next: Zuckerberg says he wants us to spend less time on Facebook. Maybe he means it