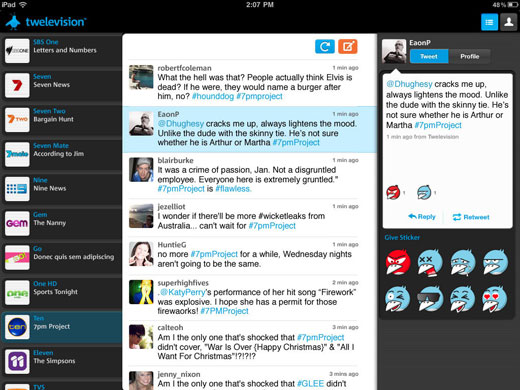 Twelevision is a new iPad and iPhone app that curates and facilitates participation in Twitter discussions around Australian television as shows air.

As Twelevision describes itself, “Twelevision helps you choose which channel and program to watch based on the Twitter conversations happening around it.”

Within Twelevision, you select the TV show you’re currently watching so that you can view tweets about the show in real-time. Twelevision facilitates participation in the conversation by pre-populating your tweets with hashtags. The app uses “Response Stickers” — essentially fancy emoticons — as a shorthand for your opinions, letting you get across the tone accompanying your sentiments as quickly as possible. Like all modern web and mobile apps, badges are awarded for various achievements.

It is interesting to see apps like Twelevision coming out. It means that Twitter is pervasive enough that developers are now capitalizing on the broader Twitter community to create smaller, more targeted communities within that ecosystem. I’m curious to see whether Twelevision will set the scene and start a trend in this area.

There are a couple of problems — and whether they are valid concerns or not, I leave to those who frequently watch Australian free-to-air — I foresee for Twelevision. Firstly, is an app that drills Twitter down to the show you’re currently watching going to be useful to a large enough audience of people? I prefer to focus on the show rather than tweet it, but I only watch shows on my Apple TV, not in real-time with everyone else. You’ll have to fill me in on whether you find TV-tweeting engrossing enough to warrant usage of a separate app.

The other thing that gets me wondering: are TV-tweeters eager enough to connect with other viewers that they’ll use an app that closes off much of Twitter while they watch? Or is hashtag search in the official Twitter app, or a dedicated column in HootSuite, enough to do the job while still allowing access to the wider Twitter community?