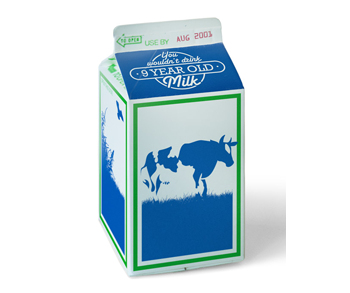 Interesting campaign being run by Microsoft Australia to get people to switch to IE8.

The plan is this – compare IE6 to 9 year old spoilt milk, get people to understand that they’re using old technology and that they’re putting themselves at risk, and once they’re convinced they need to swap to IE8 get them to pass on details of other people they know using IE6 so Microsoft can go and “help” them too.

Below is the official wording from the site:

With the latest state–of–the–art security features, Internet Explorer 8 is designed to cope with today’s modern cyber crime. In fact, research studies prove it.”

Personally, I’m in 2 minds about this campaign.

I mean, it’s great that Microsoft is trying to get people off IE6. While it was revolutionary back in its day it’s now nothing more than a headache for web developers all over the world and a massive security risk for end-users too.

It’s also a big step for Microsoft to be saying “Hey, one of our products sux and you’re using it!”.

On the other hand, this really is just a push to help IE8 grab market share away from Firefox, Chrome and Safari who have been doing a good job of gobbling up all the unhappy campers who have been leaving IE6 over the past few years.

Now, before you think I’m some Microsoft hating cynic (which I’m definitely not), check out the landing page:

Placed prominently are stats about how:

Who knows, maybe I’m over thinking it and we should just be thankful that Microsoft is going to try and use its marketing power to get people onto modern browsers.

Oh, and don’t worry about this being driven by Microsoft Australia.

Australia is a popular test market for many multi-national companies, so I wouldn’t be surprised if this campaign got rolled out across the world if it proves to be successful here.

Read next: This is great for when you're drunk: