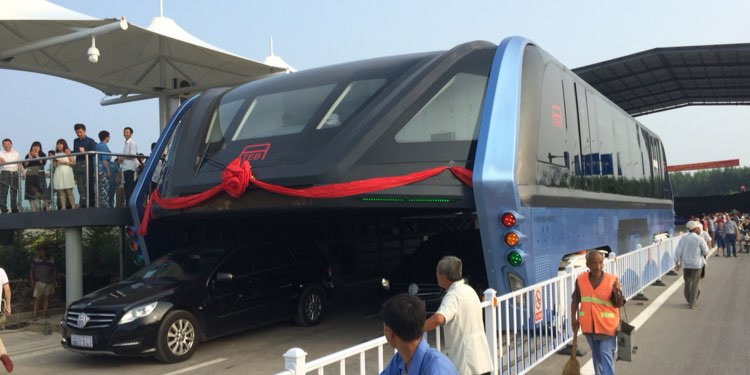 Last August, an odd beast of a mass transport system from China, which featured an elevated bus that would allow other vehicles to pass underneath it on the road, shocked the world. The TEB-1 was designed to reduce traffic while ferrying up to 300 passengers in a single cabin. But now, it looks like the project has gone off the rails – and might take its creators down with it.

The problem? Huaying Kailai, an online financing platform which allowed people to invest in the company behind the vehicle, is under investigation by Beijing police for illegal fundraising for developing the TEB-1. It also came to light last year that the developer hadn’t fully secured the government’s support for the project.

The TEB-1’s investment offering was sold as a private fund with a starting price of $150,000, and promised returns of 12 percent p.a. It looks like that didn’t work out, as 72 individual investors sued Huaying Kailai as well as TEB Technology Development’s CEO Bai Zhiming (who also runs the financing platform).

The vehicle hasn’t been tested much since its initial trials 11 months ago, and the tracks necessary for it to run are scheduled to be removed by the end of July. And more than 30 people have been held in connection with Huaying Kailai, which also happens to be run by TEB’s CEO. The company is believed to have raised some $1.3 billion for the bus project, and it’s likely that many an investor will have been burned. And with that, China’s dreams of a futuristic elevated bus have gone up in flames.

Read next: Apple wants iPhone 8 users to unlock their devices with their faces