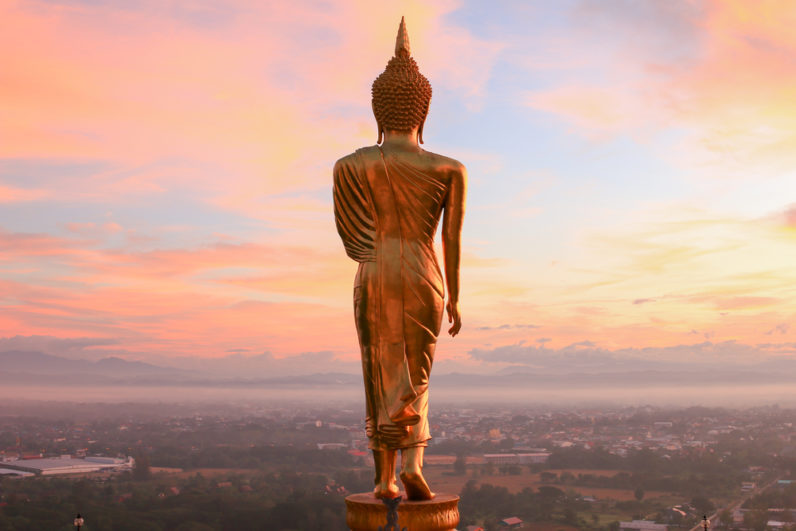 Paul Srivorakul is a Thai-American serial entrepreneur. Paul graduated from UC Berkeley and started his career working in sales for Ask Jeeves Inc. Since then he’s successfully started and exited three startup companies. Today he’s wearing shorts and a blue short-sleeve t-shirt with “Acommerce” across the front.

Paul’s sitting in an open office filled with young people and with wild animated characters covering the walls. He’s wildly gesticulating with his hands, sitting down, standing up, drawing on the whiteboard while talking fast in perfect English, explaining his startup’s plan for world domination – more or less. He would be right at home in Silicon Valley. Instead his office sits on the other side of the world right in the heart of Bangkok.

The city of Bangkok is famous, or maybe infamous, for many reasons; be it a funny name, ornate shrines, a crowded, vibrant and sometimes seedy street life, its wild nightlife, the floating markets, or even the Hangover 2. What it is not famous for is its tech industry. Yet, the tech industry, and particularly tech startups, are beginning to boom in Thailand’s capital city.

According to Dr. Adrian Vanzyl, Co-Founder and CEO of Ardent Capital – a leading Southeast Asian venture firm of which Srivorakul is a founding member – this boom has “been driven by the rise of consumer spending in the middle class… internet penetration, which has improved, and in the last 18 months smartphones have overtaken regular mobile phones. 3G has been important too as well as people getting comfortable with using credit cards online.”

His comments are underscored by the facts.

Thai internet and smartphone penetration has been growing at an incredible rate: according to the Thai Ministry of Information and Communications, the number of internet users in the country will reach 52 million by the end of the year – or nearly 75 percent penetration – only five percent less than in the US. Add that to 76 million mobile subscribers and more than 18 million social media users in Bangkok alone, and you have a city primed with the technology infrastructure for a vibrant tech scene.

At the same time, not only is private VC investment coming to Bangkok, but Bangkok’s three biggest telecommunications players – AIS, DTAC and TRUE – have begun offering startup incubation programs that provide tech entrepreneurs with training, publicity, and capital. Even the government has started a $570 million venture fund to kick start the Thai tech ecosystem. This program reflects the same successful strategy pursued by Latin American countries to develop a strong tech ecosystem.

Today, Srivorakul runs Acommerce, the leading e-commerce company in Southeast Asia, providing end-to-end e-commerce logistics and service for the region – and one of the forerunners of this next generation of Thai startups. Acommerce has raised $28.8 million in five rounds of funding and has been recognized as one of the top startups in Thailand.

Despite this boom, Srivorakul has no illusions about the very real challenges that come alongside these opportunities for tech companies hoping to start up and to survive in Thailand, and more broadly in Southeast Asia.

Srivorakul has battled these challenges constantly as an entrepreneur and thought about them often as a VC. Over time he has developed a few ideas about how to overcome them.

‘You need a kick ass founder and staff.’

This is a fairly universal concept, but takes on new meaning in the developing world and Thailand in particular. “Right now there are more investors than there are builders in Southeast Asia. That’s crazy!” Srivorakul throws his arms up in the air in the universal sign of exasperation when he says this.

Unlike in the saturated US market where many talented CEOs chase venture funding, more often than not Srivorakul will find the talent first and the business idea second. Often these teams are built with foreign talent alongside native Thais, because it is difficult not only to find the native Thai talent but to get that talent to enter the startup world.

The problem is ecosystem.

According to Srivorakul the tech startup ecosystem is just not mature enough yet.

People need to be working in startups at the age of 20 so that they can be the next wave of startup founders and staffers.

In the US, 20 year olds are rushing to work at the latest startup or to start their own, but in Thailand young, highly-educated people – of whom there are still not nearly enough – mostly choose to work for traditional corporations, a product of a highly risk averse culture. The relatively new startup culture still has much to prove to draw the top talent.

However, Srivorakul believes this is changing.  As firms like his own, and the others that he funds, recruit top young talent and mid-career talent into tech companies with relatively high salaries and attractive stock options, he believes they are building a pipeline of future founders in the industry.

‘You need to build local and defensible.’

Thai companies have the advantage of minimal local competition. However, when they do (inevitably) face the prospect of international (US, Chinese, European, or Indian) companies trying to enter the Southeast Asian market, they are invariably heavily outgunned and outmanned.

Tech and globalization gives you an advantage in the developing world, right, but does it really? Because you have to face the global players.

Many Thai startups have an international analogue. In fact, many are carbon copies of US companies –  Grab to Uber or Lazada to Amazon – because why start from nothing when you can pick from countless U.S., European, or Chinese business models proven to work? These companies can often succeed in the short term because they are using proven models. However, when the original companies attempt to penetrate the Southeast Asian market, they offer the same service, but usually with a substantially better product as a result of technological, capital, and human capital advantages.

For many Thai companies this means an almost certain demise – either being out competed or acquired at a dismal price to avoid complete destruction.

The companies that avoid that fate have built and perfected their model specifically for the Southeast Asian market. “We can’t compete directly against FedEx except to be an M and A play,” Srivorakul explains, “Certain areas, niches, are however fairly unique – to take advantage of these you need to compete at the local level.”

Thailand is not the United States, China, India, or Europe. By understanding the cultural and economic differentiators of the region, a uniquely Thai or Southeast Asian business model becomes defensible to an international competitor by creating business functions that an international company cannot easily replicate. This provides the leverage to either be a competitor or to drive a competitive acquisition price.

By way of example Srivorakul explains how Southeast Asian e-commerce differs from Western e-commerce, and how Acommerce has uniquely addressed these differences:

These are only a few examples of the structural and cultural problems that a company like Amazon or FedEx can’t easily understand or solve if they decided to take on the Southeast Asian Market. This gives Acommerce the ability to target customers that a Western competitor never could – e.g. the 70 percent of Indonesians who only make purchases through Facebook because they are not online yet. This turns Acommerce from a small fry competitor or easy acquisition to a company with market position.

‘Grow fast and regional or die.’

When businesses startup in Asia, they need to grow and grow fast. First and foremost, this is because businesses need to succeed in Thailand, and regionally as well. If they don’t scale regionally, another copycat will, and they will quickly turn from a competitor into an acquisition.

This is the market position that Acommerce has fought hard to acquire.

For e-commerce we are the biggest brand. People want to sell their companies to us. We can acquire, get liquid. We can buy in each market. We want to consolidate everything across Southeast Asia – we need to get to that just to make sure that we won’t be the ones to get acquired. We need to carve out a segment.

Srivorakul believes the eventual goal for Thai startups should be: “Win the fight locally, two, win the fight regionally, three, win the fight globally.” This is another reason to grow fast: the market opportunity is growing rapidly. The Southeast Asian market is opening up, and with more internet access and more dollars there is more interest from international players. As a result, time is not on the side of Southeast Asian startups. They need to start up while the global leader is still busy in its market and have a few years of lead time.

In the end, Srivorakul understands that even “being defensible” may mean that Acommerce will still one day be acquired, just for a higher price. Despite that possibility, he has bigger plans for his company.

E-commerce is a customer acquisition tool.

Srivorakul plans for his company to not only be a middle man, but a platform that provides everything to Southeast Asian companies, from production and marketing to sale and delivery of the product. The ecommerce products and services they have built today are to help companies enter and expand across SEA, but in the future Srivorakul envisions Acommerce will not only help global companies enter SEA but also help local companies expand into global markets via Acommerce’s platform.

In this future South East Asian companies will be able to sell and market their products on global digital platforms with end to end support from Acommerce – everything from marketing and distribution to customer service and logistics, allowing Acommerce customers to manage all their content, products, and data under one centralized system.

As a result, when these companies sell products regionally, and eventually globally, Acommerce will grow with them.

Srivorakul’s outlook: “No one has done that yet. It will take a while before companies are that bold because it’s too attractive to exit. But those of us working in this generation of startups are learning a lot before exiting.”

Track the latest tech news from Thailand and Southeast Asia with Index.co.