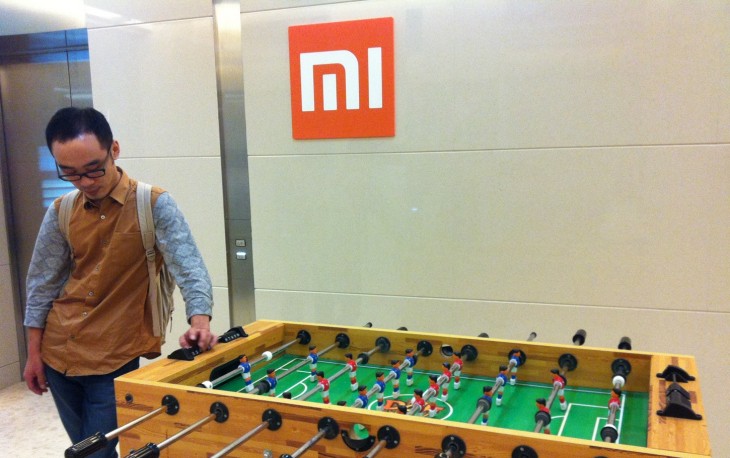 As Chinese smartphone firm Xiaomi starts to be known worldwide, many are wondering what strategy the firm has for making its devices available worldwide. TNW caught up with co-founder and president Bin Lin recently, who revealed that the key to the answer behind this is: Hugo Barra.

When Xiaomi confirmed it was hiring former Google VP for Android Barra to be its vice president for Xiaomi Global, it was already a huge hint at its ambitions to go international. Lin told us in an interview at the company’s Beijing headquarters that it is entirely Barra’s job “to figure out which region that we should enter next and how”.

In China, Xiaomi has been a hit due to its high-end smartphones tagged with low price points. This has been possible because of what Lin calls the “triathlon business model” — the hardware, the software and its Internet services — wherein the company’s revenue stream comes mainly from the latter two. Lin explains:

We think of hardware as just a platform to run services. We don’t look to make money on the hardware, we are looking at users who have bought the hardware, then started to use our services… It’s the services that eventually bring in revenue.

The software refers to Xiaomi’s highly-customizable MIUI firmware, which is based on Android, and also sells services such as themes, apps and in-game purchases. The Internet part refers to Xiaomi’s e-commerce platform which sees it sell its smartphones directly on its website as well as peripherals such as phone accessories.

Some figures: Lin says that last month MIUI and its services chalked up CNY20 million ($3.23 million) of revenue, double that from four months ago when it was CNY10 million ($1.63 million). The company is aiming for $20 million worth of revenue from MIUI by the end of 2014.

Lin notes that within the company’s business model, software is key.

“Most of the product features that people are feeling are really the software and the services,” he says. “Users like the software, they like the experience, they like how they get onto the Internet and browse the Web, how they download the APKs. They play games that run really smooth, they take pictures — great images… We have to do a great job building a great product (software) before any of the other things can work.”

For this reason, Barra was hired due to his product management experience. Lin explains what Barra’s role will be:

Different regions, different countries’ consumers will have different needs. (We need to) understand what these consumers want when it comes to software design, and even some of the hardware design and some of the Internet services that we provide, and we have to do a great job adapting to international users before we can actually sell it.

So that’s why we need Hugo, with really in-depth product experience. He’s one of the best persons in the world able to do this.

Other than Barra’s software expertise, he has also been heavily involved in hardware design, given that Android also works closely with hardware OEMs and factories, Lin says.

User feedback is a huge part of Xiaomi’s success

Lin credits a big part of Xiaomi’s success to how the company has adopted a very different approach to working with its users, and he intends to bring this forward to the international arena.

Lin says that right from the start, Xiaomi has been “super-transparent by embracing the openness of the Internet” — in how it builds it software particularly. Each time, MIUI updates are launched after incorporating user feedback into the buildware and carrying out improvements over time.

Whenever there are differing opinions as to what should constitute the MIUI firmware, votes are held.

“We don’t even hold the vote. It’s the users who hold the vote. In our forum you will see discussions and disagreements, and at some point in time some of the users will say, hey I’m tired of arguing the merits of each of our opinions, then they will say: let’s vote. And then the vote result will come back,” Lin says.

Other than software, he notes that Xiaomi also listens to its users with regards to hardware. As its consumers get hold of the handsets, they give feedback to the company, which results in improvements being made on the hardware.

By involving its customers in every step of the smartphone manufacturing process, Xiaomi has developed a user base that treats the company as more than just another smartphone firm, displaying their fierce loyalty instead. Lin says:

So it’s the sense of participation that will get them involved into the discussions, and by nature that’s also the reason they become a big fan of us.

There are hundreds of thousands of Xiaomi phones in the US

However, given that the Xiaomi model has only been tested in China, does this limit the possibility of its success overseas? Lin says no.

He says that Xiaomi currently already has fans from all over the world. Its MIUI software can be translated into other languages by independent developers and ported in unofficial versions — a list of which can be found on its website. A couple of countries from Europe are featured, as well as Brazil and Indonesia.

Lin says that Barra’s work lies in this area, as MIUI for the most part is still a system that only incorporates feedback from Chinese fans. He explains:

There are good numbers outside of China but they are scattered around and there isn’t a centralized effort to look specifically at countries’ user feedback in-depth and long enough.

I think that’s the work we need to do.

We have done that for the China region, which is why today MIUI in my opinion, is arguably the best mobile system for Chinese users. But for other regions, that may not be the case. So we need to do an in-depth look into the different regions’ needs.

Furthermore, despite its handsets being sold within China, Taiwan and Hong Kong only, many people have still managed to get their hands on the company’s devices somehow or other. Considering the phones are sold off-contract via its website — it wouldn’t be difficult to ask friends in these countries to order it then ship it over personally.

The fact that Xiaomi has a presence overseas — albeit a really tiny one — without even carrying out any internationalizing efforts, hints at how it could possibly go global once it puts its mind to it.

MIUI is part of the Android ecosystem

When Xiaomi finally goes international, however, will Google be threatened by the possibility of MIUI firmware gaining popularity and crack down on it (after all, it is a fork of Android that is very much different)?

Android forking is mainstream in China — where Google Play has no real footprint — and Google has allowed that to be, to a point. However, despite Google’s usual “hands-off” approach to Android, last year it intervened to stop Acer from launching a device based on Alibaba’s Aliyun operating system, which it deemed to be an “incomplete” version of Android.

The biggest worry for Android is the fragmentation. That people will take a branch of Android, fork it off, make a bunch of changes and then never go back. So as Android evolves, then you have a branch of Android that also evolves, and it becomes so distinctly different then apps built for this Android version doesn’t work on the other version of Android. That’s what concerns Google.

But MIUI phone – since day one, we’ve never done that. We make a system that always follows Android updates closely and for many occasions, we have upgraded together with Android’s updates.

All eyes on Xiaomi as it takes its Chinese formula overseas

The possibility of Google feeling threatened is but one of the only challenges facing the development of the MIUI software as Xiaomi goes international. It is clear that to Lin, Xiaomi’s future hinges on MIUI — after all, the former-Googler understands perfectly that to create a mobile software with an global appeal is an obstacle that Xiaomi still needs to overcome.

It remains to be seen how much of a Chinese company can adapt to the preferences of a Western audience, and all eyes are on the up-and-coming Xiaomi as it attempts to take its success formula to the world.

Hugo Barra’s image via Getty Images, some images via Xiaomi