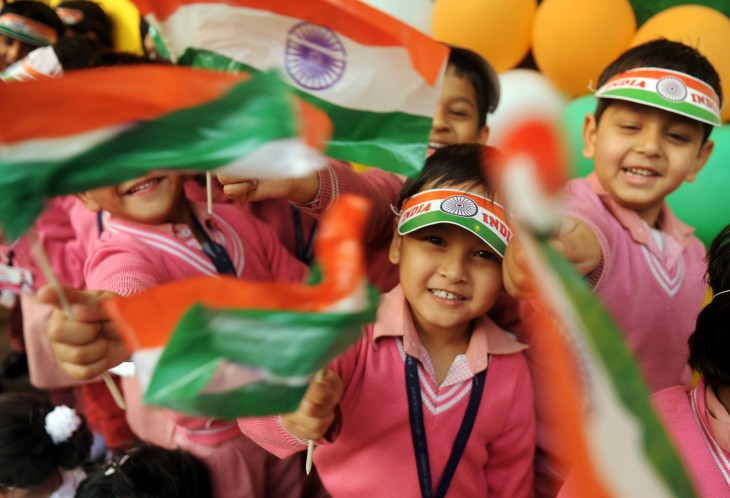 In the world of technology, it is possible to have centers of innovation outside of Silicon Valley. Shocking, right? We’re not talking about just Boulder, Austin, Los Angeles, or even New York City. Think more globally like Tel Aviv, London, Berlin, Toronto, and Sao Paulo. Another country that is emerging on the world stage as a place investors, entrepreneurs, and technologists should pay attention to is India.

In a country of approximately 1.2 billion people, there are at least two notable places where startups seem to be emerging: Delhi and Bangalore. It is the latter city that made it onto the Startup Genome’s Global Startup Index in 2012.

Bangalore may not have the same pizazz for startups compared to, say Silicon Valley, but it should not be discounted because of it. The city, and even India itself, has shown itself as having potential for a budding ecosystem. The Startup Genome Project says that while India might be one of the toughest countries in the world for a startup to flourish, by having one of the biggest global markets, it sets a foundation in which a startup scene could prosper. Additionally, another core strength of the country is the talent available — as the report says, Indian entrepreneurs are well-educated and highly skilled.

The problem? According to the report, it’s the support structure from the local cities, like Bangalore, that are needed in order to foster that growth. As Sswati Prasad, a New Delhi-based freelance journalist, says in the report:

While opportunities are there, India lacks the right startup ecosystem. It is noted that except for some top business schools in the country, most educational institutions do not help students to become entrepreneurs.

If you have a chance to read about the Startup Genome Project report, it offers some fascinating findings about Bangalore:

Bangalore: The Startup Capital of India?

In collaboration with Unstoppable India’s founder Vlad Dubovskiy and Shashi Kiran, the city is supporting an upcoming technology showcase called Startup Festival India. This four-day event is said to be a way to celebrate Bangalore’s rise as India’s “Startup Capital”. According to Dubovskiy, this festival was formed “out of fire in an entrepreneurial heart.” He says the organizers have a desire to reshape the city with entrepreneurship at the heart of the city’s future. 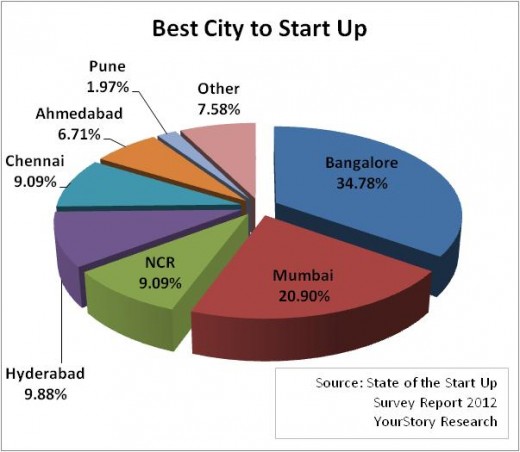 In a 2012 YourStory Research survey called the “State of the Start Up“, it found that in India, 34.78 percent of companies felt Bangalore was the place to begin. The second one was Mumbai with 20.90 percent. The groundwork for the city to become a bastion of tech for the country was laid when it accounted for 35 percent of India’s 1 million IT professionals.

To recognize this trend and to help jumpstart innovation and transform the city into a technological powerhouse that could rival any other hub around the world, Startup Festival India aims to be inclusive to everyone — entrepreneurs, early stage startups, investors, or ordinary citizens.

TiE Bangalore, a chapter of the non-profit global network of entrepreneurs and professionals, believes that such a festival will serve as “a platform for aspiring and established entrepreneurs alike to more effectively engage and exchange with the larger entrepreneurial ecosystem here in the city.”

This event is not just your ordinary technology conference. It says that it will include a variety of activities too, including morning workout sessions, plenary sessions, a startup crawl featuring 50 Bangalore-based startups, and parties.

When we spoke with Dubovskiy, he said the format was inspired by how entrepreneurship is not a career choice, but rather a lifestyle. Startup Festival India, he says, is intended to help attendees experience what startup founders go through every day in a city like Bangalore. In the end, the belief is that this will help to grow the community in the city and get people to break away from their insular groups and reach out to others to help validate their ideas. Right now, Dubovskiy says that in the country, there are few tech gatherings and perhaps Startup Festival India will begin a grassroots effort to encourage more social events.

More than just a call center

Some people, when they think about India and technology, might associate it with call centers. While that may or may not be a reality, it’s not the complete picture. There have been, and will continue to be, startups of various kinds, many that may even surprise you.

Perhaps one of the more notable ones that those in the United States might be familiar with is document-sharing service SlideShare. Started by Rashmi Sinha, Jonathan Boutelle, and Amit Ranjan, the company was acquired last year by LinkedIn for $119 million. According to the South Asian Diaspora organization, SlideShare’s founders have become a spotlight on how Indian entrepreneurs can succeed.

Other notable Indian technologists that have made a name for themselves outside of their home country include Khosla Venture’s Vinod Khosla (formerly with Sun Microsystems), Hotmail’s Sabeer Bhatia, and the US government’s first CTO Aneesh Chopra. In a Kaufmann Foundation study, it found that immigrant entrepreneurs that went to the US hailed from more than 60 countries, of which 33.2 percent surveyed came from India.

The list of successful Indians is not a short one and raises an interesting question: If these companies and individuals have succeeded not only in the US, but elsewhere in the world, couldn’t Bangalore and other cities in India do the same to promote its innovations?

We spoke with 500 Startups venture partner Pankaj Jain about what’s going on in Bangalore and he agrees with all the reports about Bangalore’s ecosystem — he tells us that the city has a very young culture and a very professional work ethic, something that mimics Silicon Valley.

If you want to know how important India is to the technology community, then you don’t need to look any further than the growing number of multi-national companies, investors, and incubators/accelerators that are heading there to set up shop. For 500 Startups, it says it sees a huge opportunity to be in the country, not because other venture firms have already set up shop there, including Accel Partners, Nexus Venture Partners, and Bessemer Venture Partners, but because:

Over the last decade, GDP has gone from around 400 billion to over $1.8 trillion. And everywhere you look, it shows: new roads are being built, internet speeds are increasing, lower priced smartphones and tablets are becoming more widely available, and higher priced iPads and other devices are seen regularly. Best of all, many of the poor are sending their children to schools instead of having them work.

Jain, along with 500 Startups’ founding partner and self-described “Sith Lord” Dave McClure, recently led a group of technologists to India as part of his “Geeks on a Plane” excursion (you can read about some of the adventures here, here, here, and here).

With regards to Bangalore, and India’s, ecosystem, Jain says that it is moving away from being just a service industry, but rather more about a product development market — specifically that the country is starting to build products around existing services like Twitter and Facebook. He is also noticing that localization and location have become a big thing in the country to help people shop, find who’s near them, and more.

Internet and mobile adoption lower than other countries

India’s Internet usage is not that substantial compared to the United States. In a Kleiner Perkins Caufield Byers report given by partner Mary Meeker in 2012, it showed that India had 121 million Internet users in 2011, a 38 percent year-over-year growth. However, that only amounted to a 10 percent penetration of the entire population. If you look at the US, there were 245 million Internet users in that same time period, but only a 1 percent year-over-year increase. But this amounted to 79 percent penetration.

Jain agrees with what Meeker has in her reports, telling us that since data adoption has been low in the country, companies have been working on building products and services around SMS technology. The same mobile-first phenomenon that startups and influencers expound in the US and elsewhere does not wholly apply in this emerging market.

But in the face of these restrictions, Indian entrepreneurs have produced some fascinating services that are designed to help with their own issues:

More about India’s startups can be found on TNW’s India or Asia sections.

The majority of startups need help getting their business off the ground. In Silicon Valley, there’s the world-famous Sand Hill Road that entrepreneurs flock to and seek investments from the likes of Menlo Ventures, SV Angel, Shasta Ventures, and others. But India does not have that proliferation of VC money — yet. What it does have is a growing support structure, not only from the firms we mentioned earlier, but also from a slew of incubators in the country. Whether it’s The Morpheus, Seedfarm, Springboard, or TLabs, there are many options available to a company.

Last month, in fact, 11 startups took part in the first national edition of the Microsoft Accelerator for Windows Azure with some that people might even be hearing and using around the world.

In a July 2012 report by YourStory Research, it delved into the perception of the VC community by Indian startups. Based on those surveyed, they say that the majority of startups that are funded are either in their growth or later stage. This is interesting because if you look at the number of companies that responded to that same survey, more than a third indicated that they were an early-stage company — only those that were growth-stage companies exceeded that number.

Jain agrees with that, but says that while early stage investments might not be as frequent, the country is seeing more angel investments happening from executives in large companies, entrepreneurs, or former Indian expatriates. Eventually, the environment will be created where early-stage funding support will be more widely available.

Bangalore, and India in general, may well be the next big hub of technological innovation, and investors should take note, if they haven’t already. In a country that’s home to more than a billion people, with a veritable bounty of technical talent, it’s hardly surprising that we’re seeing such a startup movement. Perhaps the only surprise is why we haven’t seen more SlideShare-style exits thus far, though that may well be about to change.

Read next: News Corporation is selling its 44% share of Sky TV New Zealand