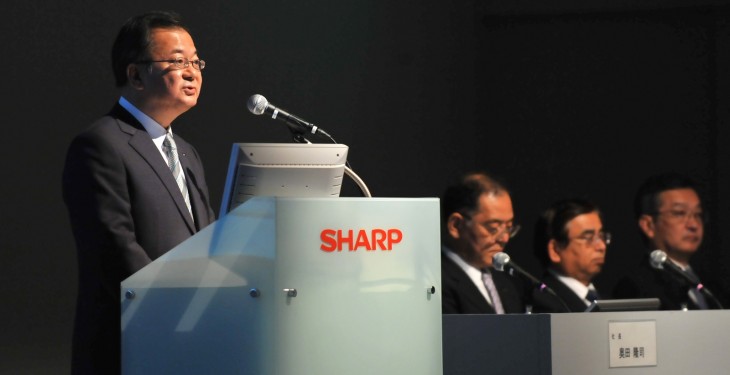 Reuters reports — via Engadget — that the company’s revenue were boosted by sales of home appliances and mobile devices, as a weak Japanese yen gave it an advantage when competing for international business. Though its TV business made money, the company is forecasting that a drop in demand for its small and medium sized displays for smartphones will see its LCD division post significant loses for its year-end financials in three months.

The company’s financial situation hit dire straits in 2012 but it was boosted in the latter part of the year with some key deals. Sharp secured $4.6 billion in loans from two banks and struck a $120 million investment agreement with chip-maker Qualcomm. Indeed, one year prior, it posted a quarterly loss of 173.6 billion yen ($1.8 billion), but it is not in the clear yet.

Having sold and mortgaged off key assets — including factories and offices — it may yet sell other parts of its business and make more strategic cut-backs. The company revealed it would cut 11,000 jobs in September in 2012, and it is reported to have already laid off 70 staff from its mobile business in China this year.

A long speculated tie-in with Foxconn parent company Hon Hai has failed to come to fruition, despite almost a year of talks and a principal agreement in place. A rough deadline of March was put on the union, which could see Hon Hai buy a 10 percent stake in the 100-year old Japanese firm.

Qualcomm completed the first half of its investment in December, and the company is set to make complete the remaining $60 million in March.

The deal will also see the company’s jointly combine Qualcomm’s MEMs display technology with Sharp’s IGZO technology to develop a range of new products for devices of varying sizes and types. Further collaborations with Qualcomm’s mobile chipsets may also be forthcoming.

Read next: RIM will begin trading as BlackBerry from February 4, legal name change to come later this year