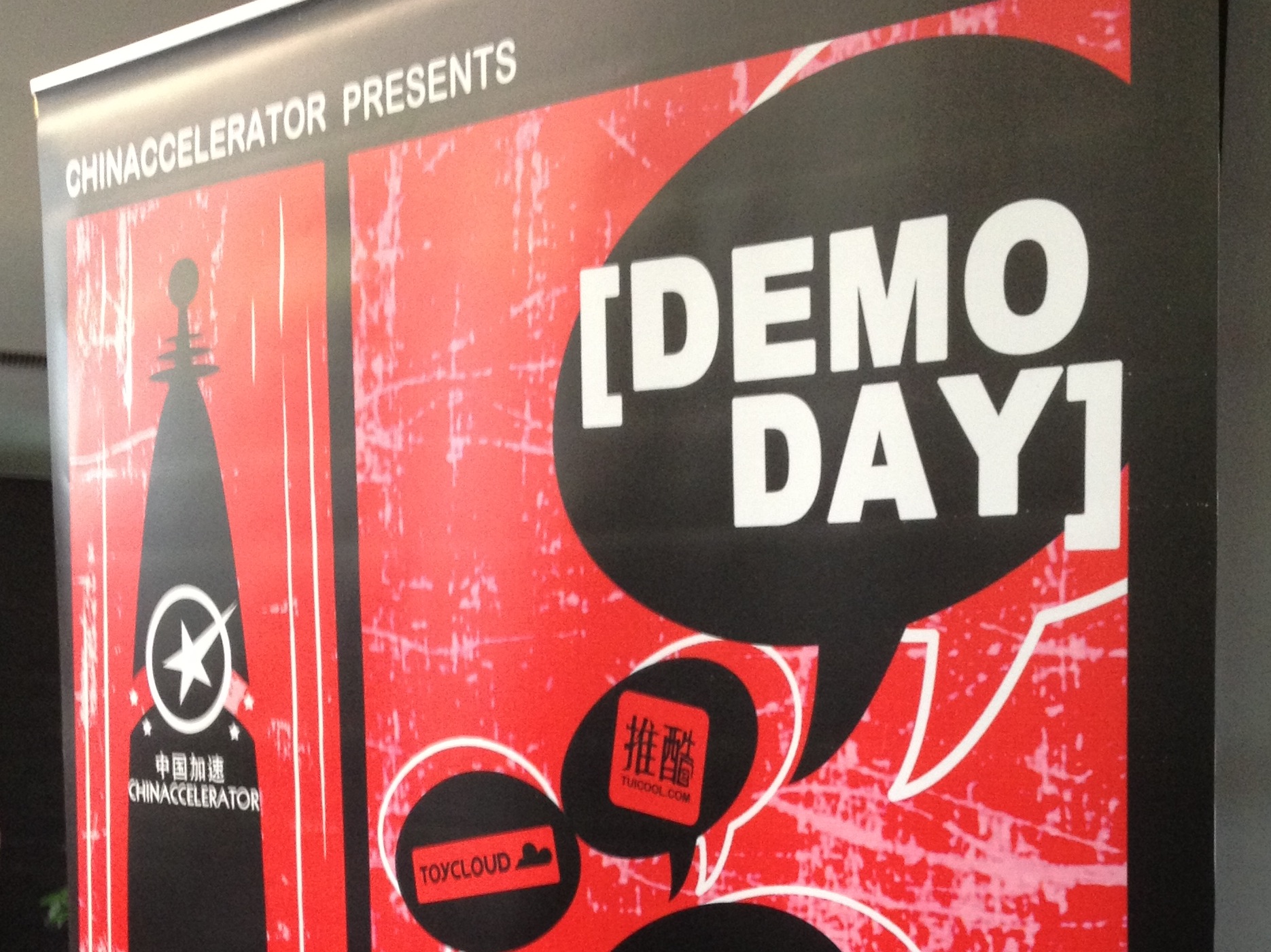 Chinaccelerator, the only accelerator of its kind in China, hosted a demo day on Tuesday for its third batch of startups. The 8 companies each got 8 minutes to pitch their projects to a room full of investors, media and fellow entrepreneurs in Beijing.

The accelerator, founded by Cyril Ebersweiler and Sean O’Sullivan and now part of the Global Accelerator Network, got its start two years ago, graduating 6 startups in its first class and 9 in its second.

Overall, I was impressed with the quality of the pitching. Chinaccelerator is raising the bar here in China, and today’s demos really reflected that.

AppSpree is a cross-promotion platform for mobile applications that is aiming to help app publishers promote their apps through an exchange network. The founders met at Mcgill College in Canada and have built a free SDK that lets developers submit banners to a network while adding the platform’s banner system to their own ads. Apps that show more impressions of banners from other members of the community will then earn impressions on other apps.

The startup plans to monetize by reserving 20 percent of the impressions for Cost Per Action-based pure performance marketing. Revenue from the system would be paid out to publishers with AppSpree keeping a portion for itself.

If this is able to tap into the indie developer community, it could make a big splash. Mobile banner ads get a bad rap, but intelligent app recommendations via a cross-promotion network would be a lot less obnoxious than some of the stuff we’re seeing on our phones right now.

Started by a former Baidu employee, Tuicool is a content recommendation system that provides users with suggested tech news based on an algorithm. Readers register topics they’re interested in and link up their social networking services to improve the quality of the recommendations, and they can teach the system, which uses natural language processing and data mining, over time.

The service is currently tied in to Sina Weibo and Google Reader.

Toy Cloud is a fun company, literally. The startup wants to build a cloud platform and app store for physical toys, like remote control cars and helicopters.

Our smartphones are powerful things, and toys have yet to fully tap the potential. Toy Cloud aims to offer tools and apps to make use of existing toys on the market. The platform would span across toymakers, so it could add functionality to toys that right now only work with one app.

App developers interested in building apps for toys can also work with the company’s SDK to quickly create their own integrations.

Toys may seem like small stuff, but founder Tom Tan says the industry brought in $83 billion last year, so there’s definitely plenty of money up for grabs for modernized toys.

Toy Cloud has seen some early interest from hackerspaces, makerspaces and developer groups.

“They like to make things that do cool stuff and we just make it possible for them to do more of that,” Tan said.

Weibo Agent is aiming to unlock the potential of Chinese social media to American companies. It offers to generate paid leads in the form of Sina Weibo accounts that its clients can then pursue to find customers.

Even in closed beta, Weibo Agent has attracted the eye of supply chain and logistics companies, e-commerce businesses and the entertainment industry.

Though the name might not suggest it, the startup’s plan is to eventually branch out to include data from other sources, including Baidu, Alibaba, Sohu and Netease.

Weibo Agent is also interested in building a localized Chinese version of its service, but the monetization model will likely be different.

The team behind 7colors has built an edutainment platform for kids that is meant to appease parents looking to track their kids’ learning while still offering a fun experience for the little ones. It’s a marked contrast from the current Chinese educational system, which is not very interactive and largely built around rote memorization.

Currently, 7colors offers a Windows and Android version of its software, with an iPhone and iPad version set to arrive before the end of the year.

The app keeps kids from jumping into other software and also provides a toolbar for parents to monitor activity and set timers and restrictions.

The company’s goal is to “make children learn any thing on any device – anytime, anywhere.”

Billing itself as Airbnb for activities, Quwanba is a peer-to-peer platform for finding things to do. The company is launching first in Shanghai with an eye toward tourists looking to discover the city.

Individuals will be able to post events or services that can then be booked and paid for from the website. The site will take a 10 percent cut of paid activities.

In addition to user-generated content, it will also scrape other websites and integrate with location-based services like Jiepang and Foursquare.

Quwanba is aiming to hit 120,000 transactions in the next three years.

Hopcab is working with taxi companies to provide mobile bookings for cabs and shuttles. They’re running a test in Malaysia and are gearing up to launch in Beijing soon.

That makes it near and dear to my heart, since it can often be infuriatingly difficult to find a cab here. I’m sure Beijing isn’t alone in having this problem, so Hopcab shouldn’t have much trouble bouncing to other cities when it’s ready.

Qiuqiu CEO Michael Lewis started off his pitch by pointing out that there are 180 million singles in China. Lewis, who is single himself, recently went on the popular Chinese dating TV show Feicheng Wurao, but it didn’t find him a match.

With the help of his team, he’s now building his own mobile social matching platform for romance. The app runs an algorithm to match up two users together, and it also allows friends to play matchmaker by recommending others.

The startup will launch its domestic iPhone app next month, coinciding with an appearance by Lewis on another Chinese dating show. The Android version could arrive in time for Valentine’s Day 2013, and an international release is planned for next year.

The service is positioning itself between online dating sites like Jiayuan and the Momo app, which is known for one-night stands. It will also be competing with social network and messaging services like Sina Weibo and Tencent’s WeChat.